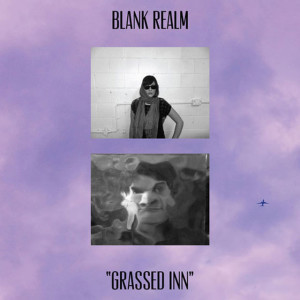 The Australian underground is chucking out some great bands and records at the moment and the new long player from Blank Realm is a case in point.

There’s a certain sound coming out of the Australian underground music scene at the moment: a fuzzy scuzzed up dirty blues take on grunge and garage rock. Brisbane’s Blank Realm are all of that but with Grassed Inn they’ve also made a deliciously catchy, wonky, pop record.

It hits the ground at a pace with Back to the Flood. A full throttle garage rock song with chunky melodic guitar and buzzing synth behind the slightly out-of-kilter sibling vocals of Daniel and Sarah Spencer (half of the quartet with their brother Luke Spencer on bass and Luke Walsh on guitar). This has the grime-edge of proper pop about it; utterly catchy and played with energy and enthusiasm.

They don’t ease up as Falling Down the Stairs kicks in. If your foot was already tapping you’re going to find it hard to resist cutting some rug to the bouncing reverb keys and circling guitar.

But then comes Bell Tower, a grand creaking mind-bend of a track. The raw vocal over the chiming reverb of guitar has something of Nirvana about it. But it’s the slow climb to utter madness, an insane everything-in climax that makes you realise this isn’t just another psych rock album but something a little bit more.

The mid-part of the album is a series of expansive psych tracks to carry you along. There’s a blues feel to Bulldozer Love and those gloriously faulty vocals becoming a mantra as the music becomes more insistent, layers of fuzzy sound crashing over one another.

As we get toward the end Even the Score comes in with a squelchy electro beat that becomes a sweet contradiction to the blissed out top lines, discordant guitar dipping in and out.

The album closes with Reach You On The Phone. A swaying beat, down deep bass and those fizzing synths all coming together like The The before the keys swirl in and sweep you away gently. Two and a half minutes in and the whole thing begins to unravel into an capacious mix of all, before fading away with a metallic hum and a gnawing desire to take the needle back to the start.

This is the experimental end of the wonky pop spectrum but by god it sounds great. You get a real sense on this record that this is a band that asks ‘what noise can we make with that?’ more often than not. The answer, of course, being ‘a bloody great one’.

All words by Sarah Lay. You can read more articles and reviews by Sarah on her Louder Than War author profile. You can also find her on Twitter.