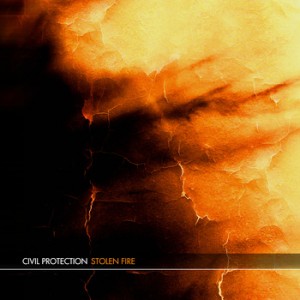 Civil Protection are a band that are entrenched in the murky waters of post-rock and its pioneers Slint, Mogwai, Godspeed! etc. Their influences are worn on their sleeves yet they manage to create moments on Stolen Fire that take these influences and morph them into grander, newer terrain.

On first listen, it may seem difficult to get passed the ‘Mogwai’ sound but after repeated listens, Stolen Fire reveals a feel and sound purely of the bands own making.

Tracks like ‘Redrawn’, which is a dirty stomping number and the most aggressive track on here, display a fondness for the heavier sounds of rock whilst second track ‘My Memories Will Be Part Of The Sky’ (how post-rock is that title) uses the genres fondness for lengthy songs with peaks and troughs to excellent affect (the breakdown about five minutes in is particularly lovely). However, the true highlights of this album are the one-two punch of ‘Section 45’ and From ‘The Parish To The Pavement’ (see below). The feel and sound of these two songs are where Civil Protection really strike gold. ‘Section 45’ is a militaristic –ambient palate cleanser that informs the listener that darker things are coming before seguing lovely into the electronic crunch rock of ‘From The Parish…’ which sounds like an (un)holy cross-breeding of Radiohead’s ‘All I Need’ and Slint’s ‘NosferatuMan’. This track in particular, with its gorgeous melancholic section three minutes in and its grunge-like guitar chug ending is a real delight and something that makes the album stand out from the pack.

Musicianship wise, the band are incredibly tight with the drumming (by Kenny Skey) in particular impressing. Unfortunately, the rhythm section are severely let down by the production. The guitars are mixed so high up and at such high volume that the bottom end is non-existent robbing us of a much needed anchor. The bass drum is hardly audible and when songs break down into just the drums and bass, the bass drum sounds more like a hamster’s heart-beat than the guttural, bowel moving thump which music like this requires. Everything production wise is very tinny and cold which is a shame (it came as no surprise that the producer of the album was also the guitarist in the band). Maybe live the sound may just have the wallop it so greatly needs.

Another downside of the album is the middle section. Tracks ‘Alaska’ and ‘Many Moons Ago’ are a severe let down compared to the rest of Stolen Fire. Alaska tries so hard to be emotive, yet with the Brian Molko like vocals and yearning guitar parts, it sounds like it should be sound tracking a slow-mo emotional scene in *insert generic US drama* whilst ‘Many Moons Ago’ is basically a post-rock take on REM’s ‘Everybody Hurts’ which tries to build and build (again, this section is where the poor drum production really shows) to a climax but just actually builds to a whimper. This is an extreme shame as the rest of the album shows some real quality.

Stolen Fire is a good debut album by a band that obviously have something going for them. There are moments that warrant repeated listens and you get the sense that with some better production, and more emphasis/exploration of the darker side of their sound, Civil Protection will become  a band whose recorded output will become stronger and stronger.

All words by Simon Tucker. for more of Simon’s writings for Louder Than War go to his author’s archive. You may also find him on Twitter as @simontucker1979.