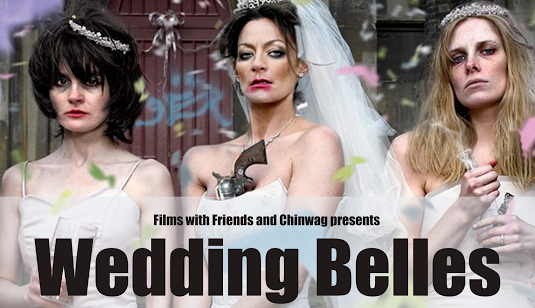 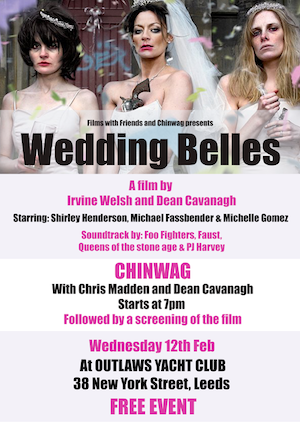 Irvine Welsh and Dean Cavanagh’s “Wedding Belles” is screening at The Outlaws Yacht Club, Leeds, on 12th February as part of Chris Madden’s popular Chinwag event. As a precursor to it Louder Than War’s Carl Stanley caught up with Dean himself for a chat about the film.

In addition to being written by the Irvine Welsh / Dean Cavanagh partnership the film was also directed by Phil John and produced by Jemma Rodgers. It was made for Channel 4 – but the broadcaster has only ever transmitted it once, much to the surprise of Dean Cavanagh…

“It was a decent budget with fantastic actors and an amazing score. God knows what C4 were thinking in not really pushing it, but in fact it’s benefited us because it’s become something of a cult, lost gem type of film. It got universally great reviews, a feature on Newsnight, a BAFTA nomination, sold well internationally on DVD and The News Of The World even tried to get it banned, but C4 never got it the exposure it deserved … I suppose the old saying, “If you want to get anything done…” applies.”

So what’s the story to Wedding Belles, and who’s in it?

“Wedding Belles stars Michelle Gomez, Shirley Henderson, Kathleen McDermott, Shauna McDonald and Michael Fassbender – in an unforgettable Northern Soul boy role – and was shot in and around Irvine’s hometown of Leith. Skillfully directed by Phil John, Wedding Belles is a high octane modern day romp revolving around the planning of a wedding. It’s dark, deliciously funny, violent, irreverent and ultimately full of heart. Kathryn Flett writing in The Observer said it was “Funny and filthy and darker than a total eclipse of the heart, I enjoyed almost every minute of Wedding Belles. And when it was done I ran myself a very hot, deep bath.”

“Even The Scotsman broadsheet – usually one of Welsh’s fiercest critics had to admit, “Wedding Belles is one of the slickest, funniest, and most well-shot Scottish films I’ve seen. Director Philip John, armed with the script from Irvine Welsh and Dean Cavanagh, has delivered a film that never falls flat for a second, and outdoes many festival offerings.”

So this begs the question, what were C4 thinking in not getting behind it?

“I don’t really care now to be honest. Their loss, plus they’re obviously too busy demonising the poor in Victorian Freak shows like fucking “Benefits Street.” People always eventually find things of quality to watch and I think that’s the case with Wedding Belles. I’m glad that it’s found a bit of a cult audience on its own merit. It punctures any hyperbole that may have sprung up around it.”

The soundtrack is something to behold: The Velvet Underground, Irma Thomas, Queens Of The Stone Age, PJ Harvey, Foo Fighters. That must have taken some work to put together?

“Ask our producer, Jemma. Poor lass worked like a machine to get all the tracks cleared and it cost a very large part of the budget. There was never any chance that we wouldn’t use these songs though. Me and Irvine always write with music in mind. We met through music and to be honest I think it’s music that bonds our friendship rather than writing.” 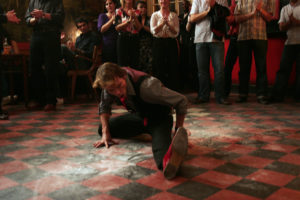 You’ve got Michael Fassbender playing a wide boy Northern Soul fan. What was the thinking behind the casting?

“Michael used to go to the 100 Club and is a genuine soul fan. Me and Irvine didn’t know who he was at the time and it was Jemma and Phil who decided, but it turned out great. The first time I actually met him was in Jemma’s hotel suite after the shoot. She was throwing a bit of a mad party – unbeknown to the hotel management – and I ended up getting turfed out with him by the hotel security. I remember him hiding in a wardrobe to escape eviction, but very little else as we were all very well lubricated.”

You’ve been working with Irvine Welsh quite a long time now. Will this continue?

“I hope so. We met just after Trainspotting the film came out and he gave me a big break. Obviously he’s got a really successful career on his own terms, but we collaborate when the project and time is right. He does his thing and I do mine on a much smaller public scale, clearly, but we’ve always got a few projects together on the go. We’re working on a feature for Jemma and a musical at the moment, but regardless of whether these are produced I’m sure we’ll still be collaborating in the future. He’s a good friend more than a co-writer.”