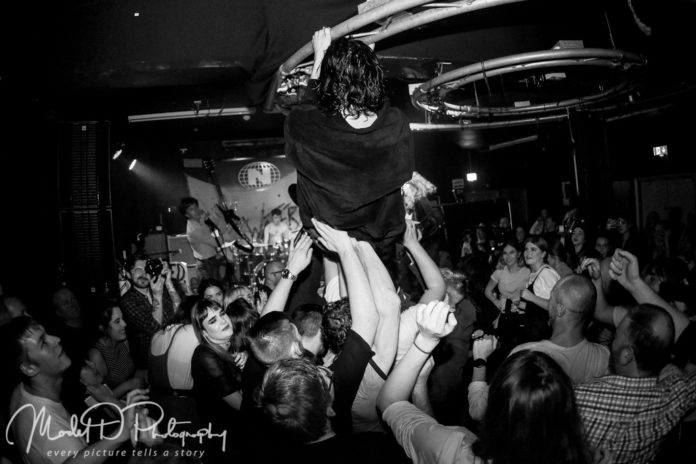 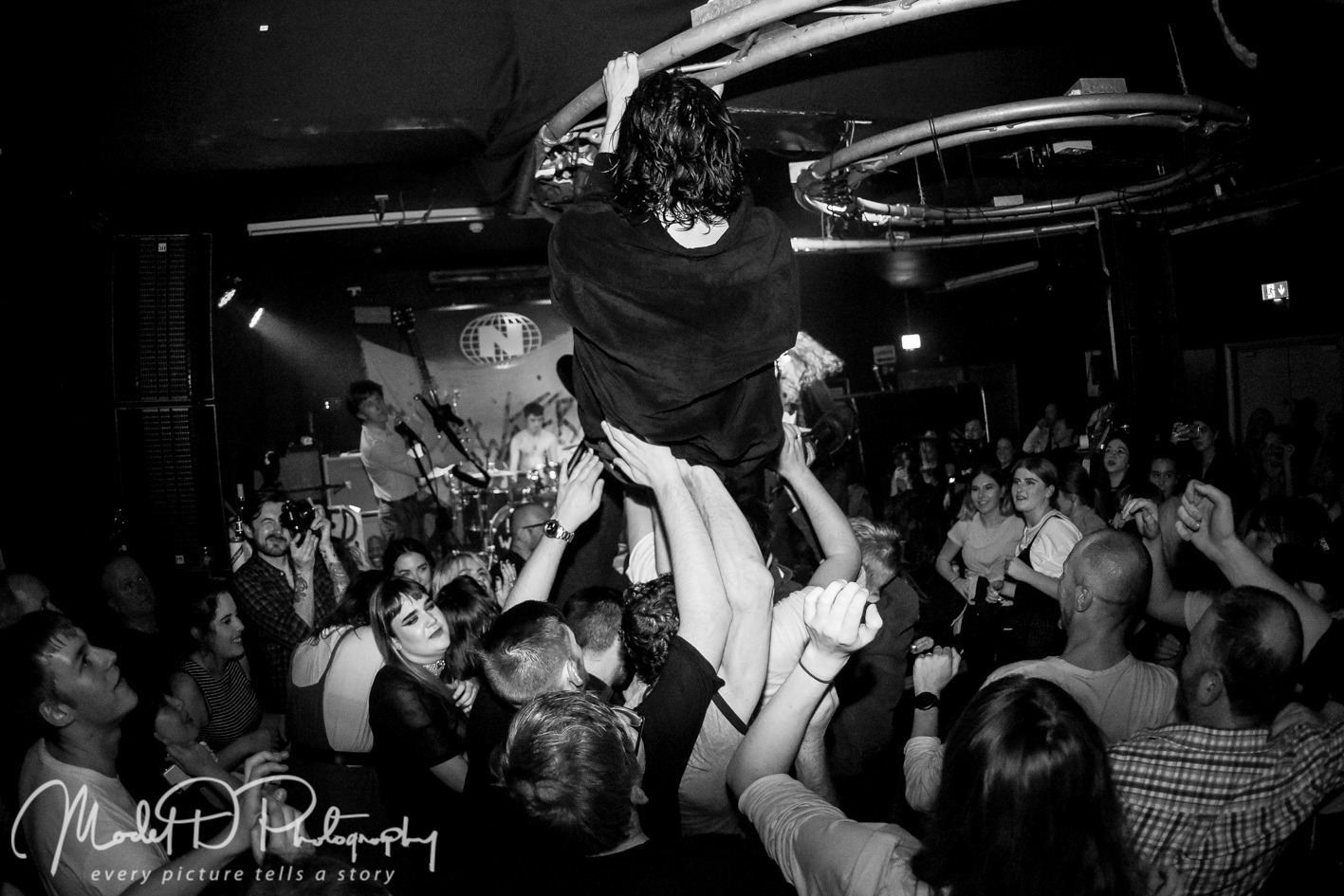 Walking down an unassuming side street, round the back of John Lewis on a frosty Sheffield night, the last thing you’d expect hidden behind the worn façade, carved into the first floor of an old terrace building, is a brand new top spec rock & roll cavern.

The only giveaway is a clutch of excitable people at a nondescript doorway, and the faint thud of a kick drum echoing down the street. This is in fact the entrance to Sheffield’s newest music venue, ‘Network’. The cracking mid-sized venue that Sheffield has been deprived of for so long, has finally been given its baptism of fire for its first proper, full capacity homecoming concert by rowdy punk upstarts BlackWaters.

Handpicked by BlackWaters to play for their “Jarr’ed Up Arts Lab” gig nights and also performing at several of BlackWaters’ infamous back garden “yard party” events, local trio Nervous Pills were the first band to take the stage. Setting a ferocious tone for the evening and blasting their way through an intense half hour loaded with heavy riffs, 100 mile an hour drums and a brilliant abrasive symphony of feedback. Harry Appleby’s hoarse and angry vocals fit the music perfectly, whilst Tom Beeston’s 6 string bass guitar and Liam Short’s relentless drumming provided the powerful low end. Standout track, ‘Trees Are Green,’ was given a spin by Steve Lamacq on BBC Radio 6 Music recently. The nihilistic chorus lyrics of, ‘I don’t care about nothing and nothing cares about me,’ are spat out with reckless abandon in this fantastic 3 minute whirlwind of a song.

Indie 4-piece Do Nothing from Nottingham, steered the mood away from Nervous Pill’s riotous anger, into a more alternative art punk vibe, reminiscent of Television or The Fall. Delivering the lyrics in an almost conversational way, but with plenty of conviction, frontman Chris Bailey had a slight David Byrne / Talking Heads vibe about him. The unpredictable free verse intonation of the vocals worked well with the danceable indie drums, funky bass and sparse jagged guitar melodies.

As Network reached full capacity, it was time for BlackWaters to play their biggest headline show to date. Originally from Guildford, the band moved to Sheffield a few years ago and the significance of the packed-out Sheffield crowd, that have clearly adopted BlackWaters as one of their own, wasn’t lost on the band. Cracking out a bottle of champagne that was immediately splashed,Formula 1 style, all over the stage, the mood and rapport between the band and the crowd was full of energy and joy.
Opening with the pounding guitar stabs of ‘I’m Not Your Man,’ the band are in full stride from the get go, with the crowd chanting back the catchy chorus in unison. The first half of the set was dominated by newer material, which has shifted from the raw punk of BlackWaters’ early work to a more melodic indie, but still retaining their trademark energy and attack.

Relatively recent tracks, like 2019 single ‘21 lessons,’ were greeted like familiar friends, immediately locking into the jumpable disco drum beat provided by James Watkins. But by the time the band launch into their earlier jackhammer punk of songs like ‘So Far Out’, it’s pure chaos. Bass player Ollie Franklin bounces on the shoulders of someone, bass in hand, riding his way through the crowd like a knight on horseback. Singer Max Tanner dives headfirst into the crowd, eventually being boosted to the ceiling, to swing his way back onstage, dangling from the lighting rig like a trapeze artist. Hopefully Network are confident in the structure of their lighting rig because it is in a PRIME place for a bit of parkour antics at future shows.

Around halfway through the set, the band take the mood down low for a moment to play a special heartfelt rendition of the acoustic ballad, ‘Love Is A Super Computer’. James and Ollie are given a rest, while guitarist David Carpenter perches on the PA speaker, slowly strumming the chords to accompany Max and the crowd, sharing vocal duties. This little window of serenity is over as quickly as it arrived as the band rev back up, hitting the gleeful crowd in the face at breakneck pace with BlackWater’s classics like ‘Down,’ and ‘Let The Good Times Roll.’

Closing with the poignant last track from the ‘People Street EP’, ‘Suzie Q’, the band triumphantly exit, having successfully delivered an excellent set full of snarling punk glory and hook laden indie bangers. The hoard of people crammed into Network filter boisterously out into the street, glad that the monotony of Dry January is over, and safe in the knowledge that they kicked off this new decade with one hell of a party.

Words by Jack Flynn.
More writing and photos from Jack can be found at his Louder Than War author’s archive and at www.jackflynnphotography.co.uk
You can also find Jack on Twitter as @floodhounds and @jacktheflynn