Home Music Bands Was this the best moment of Glastonbury 2016? 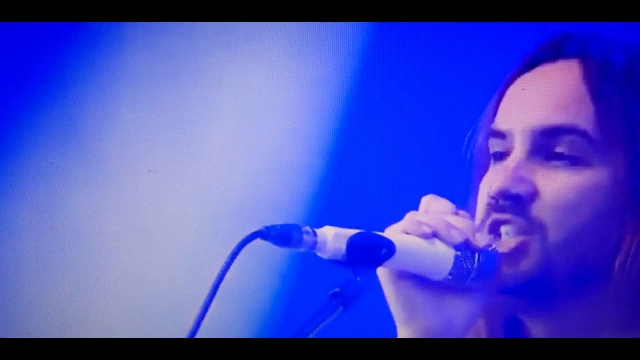 Keith Goldhanger has regrets (He’s had a few. . )
The mud may be wiped from his wellingtons and the blisters have now healed but the one song still echoing around his head from Glastonbury 2016 is TAME IMPALA’s ‘Let it Happen’.Here’s why. . .

Some of the best and most memorable moments of any event can usually be the ones we least expect.Glastonbury 2016 was no different.

Crying along to Adele or watching Coldplay singing songs with The Bee Gees’ Barry Gibb were planned and rehearsed moments and these scenes were created and expected to get the masses euphoric whilst the TV cameras were poised to get the best angles at the pre-arranged time for the benefit of anyone watching at home.

Rewind back to Thursday afternoon on the Pyramid stage. . . .

I bump into friends, we chat and I drink their beer.

During the couple of cans consumed over the course of an hour or so a crowd is gathering. Some kind of David Bowie flash mob thing I’m told but I’m not sure if anything of note happened.

I hope something did and I simply missed it.

Conversation was rife, and thinking back I can’t recall one conversation – except the one centred around the tune the PA sound guys played about three to five minutes of.  Ear-splitting loud and often enough to drown out general conversation, played about every ten minutes or so, and enough times to end up singing along to by the time we walked away.

This tune interrupted everything and turned the field into one big happy drunk muddy dance until someone somewhere hit the ‘stop’ button abruptly, bringing silence to the field until the chatter returned.

For those of us unfamiliar with this tune it does on first listen (and eventually after many more) appear to be a very decent tune to test out the speakers with. For a start it beats having a potbellied chap in a Motörhead T-shirt bellowing out ‘one two one two’ a million times and it’s only once we get home and listen to the tune on our stereo that we realise that it doesn’t actually stick half way through like a badly manufactured CD. The heavy phasing after the first verse is a permanent part of the tune and not, as I originally thought, the result of an overzealous roadie pissing around with some buttons on a mixing desk. I’d like to think that somewhere near the sound desk that afternoon, someone was having an almighty laugh at someone else’s expense, hitting the play button just as the boss had gone for a walk only to return to the desk, huffing puffing and swearing at the culprit who thinks, like I do at the moment, that this tune is the absolute bee’s knees.

If no one I know has a clue what tune this is, I thought (and probably said half a dozen times) then the company around me are screwed forever unless one of us is washing up one Sunday afternoon and it comes on the radio.

I bumped into a friend a day or so later who told me what this tune may have been –  She’d only heard one tune all day in this field and that was during the three minutes she was walking through that afternoon.

A ‘long shot’ she said.   A bullseye as it turned out. A couple of days later, all the people who were not there on that day but already love this song were now going to be in the same big field with a lot of other people who probably only heard this tune a couple of days earlier.

This time a couple of rainbows would be embracing the stage. The numbers in attendance would be in the thousands instead of the hundreds and any rain we had experienced that day had ended – the sun shone, and naturally, I wasn’t there.

My guide I still possess tells me I was in my tent recovering from a John Grant gig and preparing for another long walk up to The Park to catch Mercury Rev via the (awful) 1975 performing on The Other Stage. I envy those who were at this Tame Impala set opener. Of course I could have witnessed this in person but walked the wrong way around the site. Typical.

Glorious stuff nevertheless and a moment to add to the decades of memorable tunes we’ve heard from this stage over the years.    Throw your own memorable highlights below before I start going on again about Christine and the Queens playing ‘Tilted’ as hundreds danced along the old railway line half a mile away.

And rain – It seemed to rain a bit that day.

All words and top pic by Keith Goldhanger.