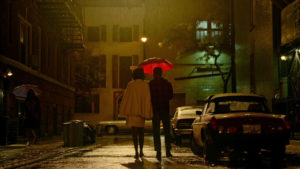 Showing at Home, Manchester and on general release now

Based on the 1974 James Baldwin novel of the same name, If Beale Street Could Talk is director Barry Jenkin’s follow-up to his Oscar winning breakthrough, Moonlight.  Lee Ashworth finds an eloquent and disturbingly timely dramatisation of racism, corruption and injustice in America’s recent past, reverberating with connotations still sickeningly relevant today.

It’s New York City in the early 70s.  A fitting time and place for any film as arguably this was the decade when New York City was created in film, and so much of film was created through the medium of that great concrete, brick and stone behemoth with all its dilapidated romance prior to its transformation into the steel and glass of its later, more exclusive avatar still scraping the skyline today.  Yet, perhaps deceptively through the prism of contemporary eyes, the slums and the squalor, the trash on the sidewalk and the abandoned warehouses, the ‘melting pot’ was a highly stratified bastion of Western urbanism where sectarianism infiltrated every aspect of domestic lives.

It is here, in New York City in the early 70s, where the nature of this exclusivity is revealed through the eyes of Tish and Fonny, a young African-American couple, whose view of the city is curtailed to what they can glimpse beyond the barriers between who they are and the simple lives they wish to lead.  Tish and Fonny see only the city that can be glimpsed between the bars of the windows and doors fortified against their ethnicity, as landlords refuse to rent to black tenants.  Tish sees the more affluent, white middle classes across the infinite width of the perfume counter, over which she stretches her hand for them to inhale, extending herself as the transaction of which the colour of her own skin debars her from being anything but a base upon which goods are purveyed.  Tish speaks to Fonny through the glass of the prison visiting room, her words mediated by the telephone receiver, as the ultimate bars have now divided this couple, the city literally coming between them.

It is here, in New York City in the early 70s, that the film begins with Tish’s pregnancy by Fonny.  Ostensibly, this is a romantic drama and yet no.  This is not the early 70s.  This is not a romantic drama (and yes, it is perhaps the best romantic drama).  The film is a synecdoche for New York City, for injustice and for what happens when an entire people are disenfranchised until their truth can be pinned out and exposed like the skin of a hunted animal, stretched across the pages of a Baldwin novel or the screen of a Jenkins film.  It’s also a synecdoche for the African-American experience of growing up on a Beale Street, as the text preface to the film points out – the Beale Street of Tennessee, New Orleans or New York City: insert city name here.

Jenkins tells the story with deft sophistication and an assured style that manages to be visually striking, warm, horrific, epic in scope and yet intimate and wholly immersive.  The third person perspective is interrupted with snatches of first person testimony, personal reflections and insight that serve as perfect analogues to the inner monologues that often exemplify the finest novels, making them difficult to render in film.  Shots of the skyline from New York’s broken roof tops, blunt and awaiting the next phase of redevelopment are juxtaposed with long take close-ups of Fonny and his framed friend Danny; tracking shots of Brownstones with kids running between the stoops are set against the cramped interior of the Rivers’ home.  And then there are the blink and you’ll miss it details and innovations of beauty, subtle yet full of the artistry of hope, such as the red of Fonny’s umbrella illuminated in the street light in the image accompanying this review.

Danny’s tale of plea bargain hell, sent down for years for grand theft auto despite not being able to drive, is the presentation of the Chekhovian revolver in the film.  It is the scene that the whole film revolves around.  As the camera orbits the two men at the kitchen table, and the extent of Danny’s trauma is disclosed, an horrific understanding passes between them as Fonny realises, and subsequently we realise, that this is a fatalistic narrative from which there is no escape: innocence is of no consequence.  It’s a scene that is reminiscent of Bob Dylan’s lyric: “If you’re black you might as well not show up on the street, unless you want to draw the heat…”

Jenkins’ film has a languid tension that pulls taut as the political topography of Beale Street becomes apparent, not just to us, the audience, but to Fonny and to Tish.  In its storytelling, its cinematography and performances it’s an impressive progression from Moonlight, which is saying something.  As with BlackKklansman last year, this is a film that demands to be seen.

Watch the trailer for If Beale Street Could Talk here: