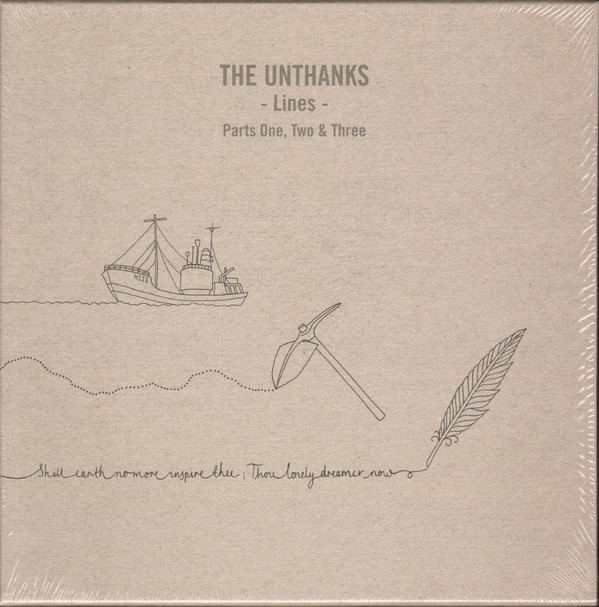 The Unthanks deliver a stunning trilogy of song cycles that focuses on three female perspectives.

We’ve grown used to The Unthanks series of ‘diversions’ from their regular recording routines having encountered their interpretations of works by Robert Wyatt and most recently the songs of Molly (mother of Nick  and Gabrielle) Drake.

In the age of equality where some may still be more equal than others, for their latest project, they’ve taken inspiration from the works of  Emily Brontë, female First World War writers  and Hull fishing worker Lillian Bilocca. Each has been given each a ‘medium play’ treatment to form a package which offers a range of musical flavours  and as you’d anticipate, is an elegant and refined set. It’s particularly the case for vinyl lovers who can pick up a neatly crafted slipcase containing all three sets (plus the inevitable download codes).

The usual Unthanks band format is also tweaked to include contributions from various musical guests yet on Part Three of Lines, gets  stripped right back to just an intimate core of Adrian McNally and Rachel and Becky Unthank. But that’s getting ahead of the story which like all Unthanks releases, needs to be pored over and cherished.

Volume 1 takes  up the name of Lillian Bilocca, the lines written by Maxine Peake and revolving around the theatrical performance written around the tragedy that was the Hull triple trawler disaster of 1968. Bookended by two atmospheric pieces which reinforce a recurring musical theme, three songs portray  a strength and power as she explores what happens when “a woman puts her head above the parapet and speaks out.” Lillian Bilocca’s tale is one of suppression and determination and ultimately sadness. The idea of ‘men’s work’ in A Whistling Woman –  “a man may do a thousand things” – finds The Unthanks  in robust and full flow, delivering a piece with a passionate fervour and unfamiliar drive that perhaps the track as the outstanding if not the key piece of the whole set. Similarly stately is The Sea Is A Woman and although Lonesome Cowboy finds them in soft velvet cabaret club mode with an easy vibe and brushed percussion, the Peake/Unthanks combo proves highly fertile.

Volume 2 is based around World War One writings and despite being a period which holds much personal interest, doesn’t  quite match the dominant  impact that comes in the strength of the opening Lines, yet with repeated listening, much is revealed and the words start to drill home. Poems and letters of the period are given a musical coating including contributions from Sam Lee and Tim Dalling. There’s a unsettling poignancy that starts to break through particularly on Roland And Vera whose letters to and from the front  in the face of tragedy could easily be crooned by a world weary Guy Garvey alongside the sweeps of strings.

The two minutes of War Film provide the sombre highlight of these Lines; “my little son rotting in no man’s land” and “all those men had mothers”  strike to the heart  while “we ate our breakfast lying on our backs” as the shells fly overhead in Breakfast offers a lighter moment and by golly, you can see how it was needed.  The overwhelming sadness of  Suicide In The Trenches brings home the contrast between the determination and resolution that comes in  Volume 1 while the despair and bleakness  that comes with the words simply reinforce the futility of war and waste of life,

Volume 3 sees Becky and Rachel taking the poems of Emily Bronte with just the piano of Adrian McNally to accompany them. It’s quite apt that it’s a musically stripped back set of Lines and that they choose to let the words take the lead role. Ten poems set to music written on Emily’s piano in the Bronte Parsonage in Haworth with only the sound of the wind from the moors, a flock of birds, footsteps on the stone floor the tinkle of the servants bell to accompany them. It’s an atmospheric collection that both chills and warms.  The Unthanks with Emily Bronte, herself having to take a male pen name to be accepted at the time,  each at their most fragile and perhaps the clearest set of Lines that sees sisters doing it for themselves.

The trademark of quality that comes with the Unthanks name shines through once more. There’s also the added bonus that Lines comes with the further excitement of trying to second guess what they’ll do next.

Watch a short film of Shall Earth No More Inspire Thee: