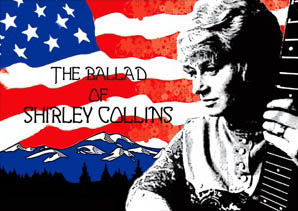 The Ballad Of Shirley Collins

The film is out in October – all details from the website.

In this hypnotic and mesmerizing film that perfectly captures a unique musical vision and pioneering voice, you are in turns moved, captivated and left full of the warm glow that only the purest of visions can give you. Capturing the life of the folk singer Shirley Collins the filmmakers have unearthed a layer of our own island and culture that is so perfectly captured in her beautiful voice that resonates from her early recordings in the fifties to her comeback album, after decades where she had lost her voice, recorded at her home with  Ossian Brown and Stephen Thrower of Cyclobe – a record that perfectly adds the layers of wisdom and the beauty of ageing that can only make the music even more mystical and powerful when delivered by this most wonderful woman.

The film follows Shirley around with her purist and captivatingly powerful vision of folk music untainted by age and her magnetic charm and sharp sense of humor and modesty adding to what could well be the music film of the year.

There can be few musical stories as beautiful and pure as this one – treasured cult folk singer and folk archivist, Shirley Collins, whose career started in the fifties singing stripped-down plaintive British folk songs that somehow connected deep into the heart of a centuries-old tradition with her plaintive and haunting austere style accompanied by her sister Dolly on instrumentation. Her voice cuts through the decades and gets to the heart of not only the music but of England itself – the England that still exists beneath all the concrete, chaos and noise of the 21st century.

This film is a brilliant capture of a remarkable woman who was at the heart of the British post-war folk boom as it tried to reconnect with a long lost past with the melodies and lyrics of the people from a remarkable woman who also spent six months in the USA with her then partner Alan Lomax in the fifties recording old American folk songs sung by croaking voiced old people on their doorsteps. These recordings captured the most perfect of musical forms before they faded into history – a stunningly important service – before she herself returned to the UK and somehow became even more English sounding – like the American trip was a powerful reminder that the even more hidden UK folk was also tantalisingly close in the misty rolling hills and the forgotten rural villages.

The camera follows the engaging Shirley Collins as she records her first album for decades, talks about the music that dominates her life and of her relationships and the hurt that contributed to her losing her voice and her years outside of music before her return encouraged by David Tibet from Current 93 who speaks on camera as does another major fan, Stewart Lee – whose charm and shiny-eyed fan interview with Shirley is one of the film’s highlights.

Of course the music is magical and the backdrop of the Sussex countryside, with its creaking olde England charm, is the perfect backdrop but the film stands up as a perfect piece on a fascinating life and a magical soul – a woman whose sweet charisma and steely belief in the purity of music will resonate with anyone who puts art before the dollar.

Anyone who ever loved music in any of its multitude of forms has to go and see this film – it will leave you feeling that the world is a better place for the magic of melody, the wisdom of ancient song and the powerful storytelling locked into semi-forgotten snatches of music and the atmosphere created by a perfect voice and a portal deep into the hearts of our fractured culture.