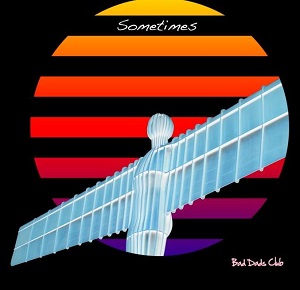 As the follow up to the poppy Good To Be Loved, Bad Dads Club (aka Steve Blood and Andy Lee) return with their second single in the form of ballad Sometimes. It’s a cracker.

Simplicity is the key on a heartfelt plea to see the best of the writer rather than the negative things. Lyrically, it’s strong and bordering on upsetting. Musically, it’s a lone piano courtesy of John Taylor. The vocal of Lee is quite superb. He holds notes of amazing strength and length, and interprets the song beautifully. The three factors managing to make this not sound like just another ballad with its adult approach.

As with the previous single, what follows are four more versions of the same song, this time in upbeat fashions starting with the Tuscan Leather remix. It’s a safe pop version with makes it accessible to a wider (and maybe younger) audience and lifts the ballad with added bassline, chants and string simulation.

Remixers, Super Stylers who have worked with the likes of Tinchy Stryder and JLS throw in a house version complete with added effects and rave resonances before Audiotrip present their Diamond edit. It’s a huge sound again with a house theme that could have the clubs of Ibiza rising and shouting in seconds. Chants makes the sound overflow with Summer and the sparkle of Mediterranean beaches.

The final version, from Dan Boots of Stereojackers adds a trance version into the pot with echoes of the marvellous (and sorely missed) Faithless, and one that would please clubbers at any time. It’s a mammoth mix which builds and falls with enough breaks to grab a quick mouthful of your drink before starting up again.

To close are instrumentals of all tracks (except the piano version) to complete a cracking collection of nine tracks in total.

Bad Dads Club could have local radio stations together with Radio’s 1, 2, 4 and 6 sewn up with an appropriate version each. If it’s intentional then it’s a masterstroke and they could well have a big single on their hands.