An awesome lineup with three of the finest bands around at the moment, all of whom play out of their skin. Just when Lee Hammond thinks the impossible has happened Fucked Up blow the Cluny apart.

We’re down early for this evening’s show as it is nothing short of a veritable feast of great punk music. First up are Copenhagen’s finest exports Lower, on record these guys are brilliant. However, live they seemed to be somewhat lack lustre which truly was a shame, perhaps it just wasn’t their night but we’re left feeling somewhat cold by their short set.

Arriving fashionably late the utterly awesome Cerebral Ballzy take to the stage a little after nine, understandably these guys are on a high this evening with today being the release of their second album. Honor is in a particularly ruthless mood this evening as him and his band tear the roof off The Cluny, down at the front the bodies fly as Honor whips this packed crowd into frenzy. 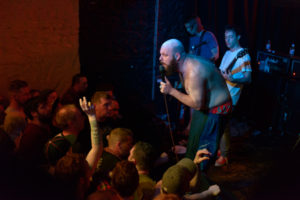 The set is heavily laden with tracks from the new LP Jaded and Faded, all of which are met with a rapturous appreciation. Those from their self titled debut such as On The Run are screamed back at them, as Honor offers up the mic to his adoring fans they yell their way through every word. There is no doubt in our minds though that every track from Jaded and Faded will receive such reactions in the not so distant future.

It feels like we’ve already had our moneys worth, but as the lights glow red upon the stage and the heavy sounds of the drums fills the venue. The crowd cheers as a much slimmer version of the infamous Pink Eye takes to the stage, the crowd beckon him closer as he begins his aural assault. As ever it is only moments before Pink Eye has escaped the confines of the stage and is terrorising the crowd and the bar staff alike.

Fucked Up are out on tour in support of new album Glass Boys, tonight has them playing tracks from across their back catalogue. With an obvious slant on the new record, Led By Hand is an awesome track that is an instant hit. However, Paper The House is something else with its chirpy guitar lines leading you into a false sense of security before the track explodes and Pink Eye takes over in his phenomenal fashion. 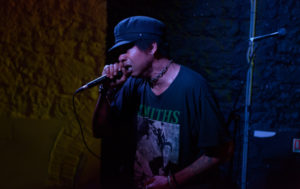 The band rip through the awesome Queen of Hearts Pink Eye following in the footsteps of Honor, having his loyal subjects for the evening sing half of the words as he offers out his mic. The bodies are flying from the first moment as the band break into David Comes To Life, so does the room as audience members stage dive and are held aloft by their brethren.

Pink Eye behaves in his usual fashion shunning the stage for plenty of crowd involvement, he truly is a man of his people and tonight’s crowd truly appreciate it. Baiting the Public is visceral and heavy, Pink Eye snarling in the faces of the pogoing audience below him, every word snarled with passion and angst. Yet during the short breaks of angst he divulges us with his love of local metal legends Venom.

This evening has truly taken our breath away, three unbelievably awesome bands all at very different stages of their careers. All coming together to create something truly amazing and just when we thought Cerebral Ballzy blew the roof off, Fucked Up stepped up and tore the whole house down. You can go and see hundreds of bands and so few will leave a lasting impression, when it comes to Fucked up though its always a different story, whether it be for good or bad reasons no one will ever forget when Fucked Up came back to Newcastle.