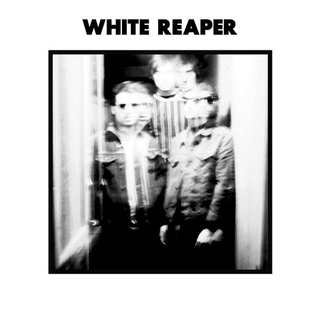 Yet another cracker of a release that was originally a Record Store Day-only album, this way-too-short debut from Louisiana’s White Reaper has touchstones that include 60’s garage, NYC punk, bubblegum pop and Shadow Morton-style girl group melodies. As the first clanging chords of Cool pierce the speakers, you know you’re in for something special. There’s a smidgeon of the JAMC amongst the barely-held-together ramshackle speed blur although the velocity of the song would suggest that these are no raw amateurs stumbling along. There’s a gorgeous little bit of guitar interplay mid song that actually recalls The Allman Brothers. That’s if the Allmans were glue sniffers instead of dope fiends.

White Reaper are Tony Esposito on guitars and vocals, with twin  brothers  Nick Wilkerson on drums, and Sam Wilkerson on bass, and as mentioned, are out of Louisville. There’s little of the typical Southern rock here (other than the aforementioned Allmans) although some of the smoke and lightning of the blues is woven through the tracks.

Funn continues the merry journey with some smart organ flourishes among the fuzzed-out bliss of the guitars. There’s a real melodic slant throughout this record that begs one to hit repeat. Repeatedly.

Conspirator (their first single, which brought them to the label’s attention) is an amphetamine buzzsaw of visceral, vicious energy. There’s hints of The Seeds psych throughout the album and this adds another level to the gleeful souped-up raw punk of the songs. The Ramones are an obvious influence and one can hear snippets of that classic surf/bubblegum sound that they patented so well. The production on the EP is perfect; slightly gnarly, slightly “off”, vocals sounding as if they’ve been recorded through a tiny transistor radio and drums that clatter as if about to collapse, giving a proper live feel to the songs.

All words by Joe Whyte, you can read more by Joe over at his Author Archive here.