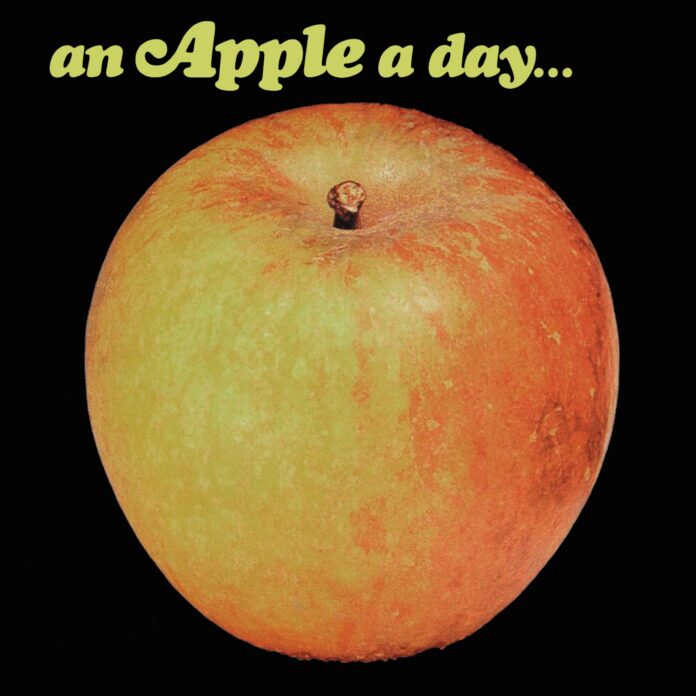 Apple – An Apple A Day 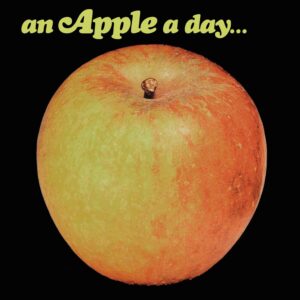 Reissue of the sole album by Cardiff based band Apple, a genuine psychedelic rarity that was originally released on Larry Page’s Page One label in 1969. In 2017 a mint copy of the original album went for £4000 on eBay and Apple have been termed the only UK psych act “still shrouded in mystery”…LTW’s Ian Canty looks at whether the rareness of the disc matches up to genuine quality…

Cardiff band Apple, who claimed the name just before the Beatles took it up for a range of activities (and long before Steve Jobs booted up a PC), are responsible for one of the rarest albums of the psychedelic era in An Apple A Day. Their story begins with popular beat combo Brother John And The Witnesses, who had their momentum stemmed when Andrew Fairweather-Low poached two band members for his new outfit Amen Corner. Guitarists Jeff Harrad and Rob Ingram were aware that things were changing quickly and opted to start afresh as Apple. Drummer Dave Brassington, ex-Vance & The Vanqueros and singer Dennis Regan were picked up from the lively Cardiff music scene and when the search for an appropriate bassist drew a blank, Harrad moved over from guitar. Keyboardist Charlie Barber from Newport completed Apple line up that set about proving their worth on the Welsh gig circuit.

Travelling down to London to cut a demo, Apple were lucky that the first person they presented it to loved it and offered to sign them up there and then. This was person was famed manager Larry Page, also the proprietor of Page One Records. After piloting the Kinks towards fame, his new charges The Troggs had launched the label with a strong run of hits. But by the time Apple appeared on the scene, the Andover garage marvels were in dispute with Page with their chart days mostly behind them. Apart from Plastic Penny’s Everything I Am, nothing on the Page One roster bar the Troggs had been a chart success. There’s a sense that the imprint was a little behind the times come 1968, still responding slowly to the psychedelic explosion of a year before in a half-hearted fashion.

However all seemed rosy for Apple and they released their first single Let’s Take A Trip Down The Rhine/Buffalo Billycan in the late autumn of 1968. The A side was a neat piece of flowing piano-led psych pop with stinging guitar and a de rigueur drug themed title. Despite some encouraging reviews, it didn’t sell in huge quantities. Nevertheless Page One had sufficient faith in the band to ask for an album and put forward Caleb Quaye for production duties. Preceding it was a second 7 inch Doctor Rock/The Otherside. Doctor Rock was simple and commercial enough to be even push towards bubblegum territory, a very catchy song about a Cardiff soul DJ embellished with another fine and freaky guitar break. It sounds great, but although the bubblegum sound was pretty hot at the time, the hoped for breakthrough to the charts never happened.

Even so Apple had enough material in the can for Page One to push on with the album’s release in early 1969. Larry Page, well-known as being a bit thrifty, had worked out a deal with the Apple And Pear (nothing to do with cockney rhyming slang) Development Board to fund the album. This meant that the record came with APO bumf and the sleeve was also styled to suit their purposes. The band and their music appeared secondary, something that seems to have been confirmed by misspellings and erroneous track listings on the original sleeve. Apple were unhappy with how the record sounded too, with demo tape recordings being used. After cutting one more demo for Page One (the lost track Love Me), they returned to Cardiff and split up as a result of internal fallouts, bad feeling and bitter disappointment.

Apple’s story is a sad and familiar one, a route that so many bright hopefuls trod over the years. But they definitely had something worth hearing. They may have been some distance behind the cutting edge as the end of the 1960s drew near, but that doesn’t matter much listening to them in 2020 as there are a fair amount of freakbeat/psych zingers included on An Apple A Day (even aside from the single tracks). Page One, despite their trouble with the label, was a good fit for Apple sound-wise. They tended towards the tougher end of the spectrum like labelmates the Troggs, which consequently gifted the band a certain durability through the years.

The album commences with re-recordings of Let’s Take A Trip Down The Rhine and Doctor Rock. They are followed by The Otherside, a moody post-psychedelic sketch with a lovely lifting feeling to it, something that contrasts nicely to the downbeat subject matter. Next the song Mr Jones struts along with Charlie Barber’s piano a good counterpoint to some finely judged percussion. They version the Yardbirds’ Psycho Daisies and the much covered blues songs Rock Me Baby and Sporting Life during the course of the LP. The latter two are very much the kind of swaggering r&b that padded out a fair few psychedelic platters, but I did like their gung-ho taken on Psycho Daisies much more.

The sleeve note expounds that they sound like Syd Barrett fronting the Kinks, which isn’t that far away from the truth. Maybe the Creation mixed with the Mike Stuart Span and a blissed-out Small Faces too, as there’s always a pleasing crunch below the pumping piano and feelgood harmonies, like on The Mayville Line with its silly Monty Python-style voices. You can sense the time the members spent on the Welsh live scene honing their chops, something that really proves its worth on the more whimsical items on An Apple A Day.

Though simplistic lyrically, Pretty Girl I Love You has a neat bassline and guitar that drives it onwards. Buffalo Billycan is another gem, light Syd-like psych mixed with cutting wah-wah guitar interjections that really soars and Photograph, which begins with a brass band sound and includes strings in an “everything but the kitchen sink” production, drifts along coolly. Final track Queen Of Hearts Blues again highlights a horn section and is a freewheeling beauty, bringing the LP itself to a very satisfying close.

This collection ends with the four original single cuts, which are pretty darn groovy too. Apple had some great tunes and ideas, which they backed up with well-developed musical muscle. It’s a shame they never got the chance to build on this album, but An Apple A Day still sounds mightily good, inventive and exciting musically. So perhaps that is some consolation to the surviving band members, that their fine efforts all those years ago are finally able to be appreciated.

If you’re looking for a top quality, rare 1960s psych album recorded by an unknown quantity, I imagine there’s a fair chance An Apple A Day may well scratch that itch for you. You also get a full band history from Jeff Harrad in the sleeve notes, the inside story from “horse’s mouth” really. This helps uncover the Apple mystery at last and rounds off a very well put together and listenable set. Hats off to Grapefruit and Apple, who by the evidence provided here deserved much better.