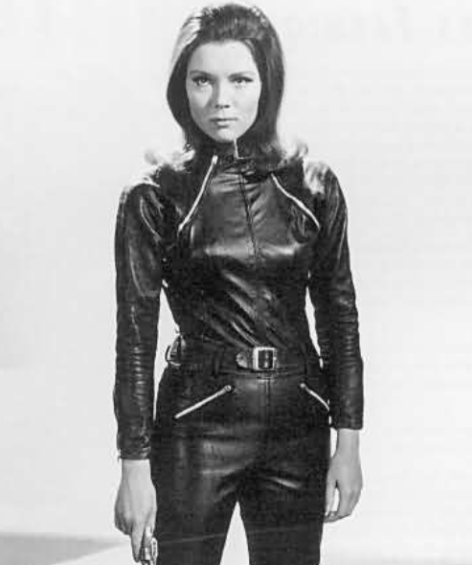 As Emma Peel, in that most British of TV series The Avengers, she was one of those freeze framed icons that seemed like they would be there for ever. In that series she was the empowered, emancipated, high kicking, smooth talking, slightly dangerous new woman – Siouxsie before Siouxsie and a female Jim Morrison before the Doors – she was a leather clad icon in a time of starch and frocks.

The sixties was encapsulated in that quirky oddball series. Emma Peel stood for M appeal or man appeal…There was the cordite whiff of sex but on her terms, that sassy, sharp, smart encapsulation of swinging London played out in the monochromatic sci fi of a James Bond for the future. A James Bond set in an imaginary world that was closer to reality than the empire preening of the films.

Like so much of that eternal decade she seemed frozen in time. A permanent reminder of a possibility and a cool and yet very British presence. She was an English catwoman from the suburbs leaping over hedges and rushing past the twitching curtains of middle England instead of the Gotham city of Bateman’s nemesis.

Of course she was on the side of the good and with Steed was representing the last vestige of empire. She was the high kicking, future is female, running alongside Steed’s impenetrable pinstripes and curt good manners. Emma Peel was breezing into the future. She was a modern pop culture icon from an architectural past and a time when things were turned on their heads.

Of course that was 50 years ago but Emma Peel still seems impossibly modern. She was the future of the past, the nostalgia for an age yet to come, a TV flicker of a different future, a futuristic cool…