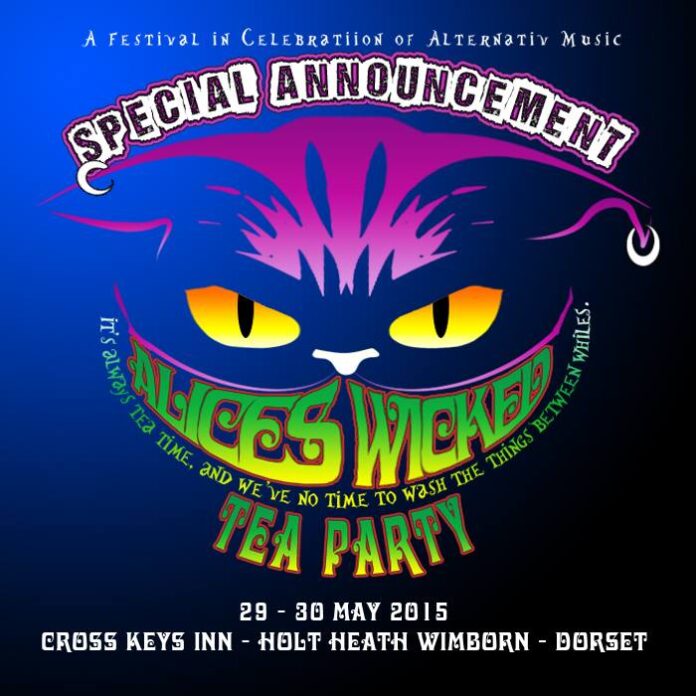 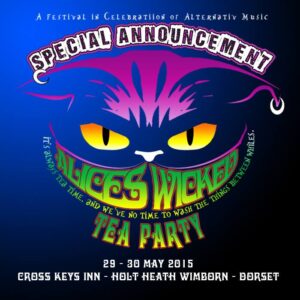 Down in deepest darkest Dorset something wicked is stirring – Alice’s Wicked Tea Party which gives music fans in Dorset the opportunity to come together to celebrate all things alternative. Limited to 500 tickets and set next to an award winning pub,  this Tea Party promises to be something special.

The last weekend in May sees the emergence of a brand new grassroots music festival. Alice’s Wicked Tea Party is dedicated to all things outside the mainstream of the bland and boring pop industry.

Curated by Wicked Spins Radio Alice’s Wicked Tea Party is unashamedly setting out to promote all things alternative. Those attending will be treated to two nights on a superb rural site, a top class line-up showcasing real music by real bands. If you are interested in genres, then punk/ goth/post punk /EBM /industrial /electronica /alt- rock /alt-metal /indie /garage/ psych and experimental artists all get a run out so as you can see there is something for everyone.

Well something for everyone except fans of One Direction or 5SOS perhaps!

I have been rather impressed  with the organisers of Alice’s Wicked Tea Party as they refused to be deterred when Dorset County Council refused to licence the event, especially as some of those involved run several festivals on the same site. It would seem that the council do not want to give a voice to anything outside of the mainstream. After much panic the festival has now moved from its original location near Lytchett Matravers to a new site next to the Cross Keys Inn at Holt Heath near Wimborne.

The site may be rural but it is very accessible being just 10-minutes outside Wimborne and 20 minutes form Poole or Bournemouth. What could be better than holding a music festival on the site of an award winning pub. As well as the pub, the bar and food outlets are very reasonably priced so just come along and chill out with a weekend of great music and a great range of beers and ciders.

Alice’s Wicked Tea Party is one of a growing band of under the radar grass roots festivals that are springing up around the country. As someone who attends dozens of them I can tell you that they are relaxed and friendly affairs. The beauty of these gigs is that once you attend a couple you very quickly get to know others who are attending. With tickets limited to 500 you will recognise people, you won’t have to queue for half a lifetime for the toilet and nowhere on the site is more than five minutes walk away.

This all combines to create a beautifully laid back vibe and as there are no backstage areas where artists lock themselves away you will be able to have a chat with your favourites and hopefully you can even buy them a beer.

In recent years we have all seen the stories about the big festivals that have gone to the wall because they aimed too big. You might not be familiar with all of the artists on show but trust me it doesn’t matter. You will hear lots of bands that you will love. The intimate atmosphere and friendliness of these events adds to the vibe and you are sure to have a fantastic time.

With three stages, two main stages that will run alternately to each other so that no two acts clash with the other and a third satellite stage that will host performances from the Alice in Wasteland Theatre group during the day and band performances from the evening. You can even stand at the bar and see both stages. With this set up there is no delay or waiting around whilst the stage is reset for the next band.

With all of this on offer and a ticket price of just £40 including camping (£50 on the gate) what is stopping you? I think this could just be one of the highlights of this year’s festival season. Buy your tickets now and help to make a success of a brand new and very exciting Grass Roots festival.

Tickets for Alice’s Wicked Tea Party are available online at wegottickets.com and from selected outlets listed below…

Children under 12 get in free.

Words by Alan Ewart. You can follow Alan on Twitter at @soundofmysummer. Read other articles by Alan here.