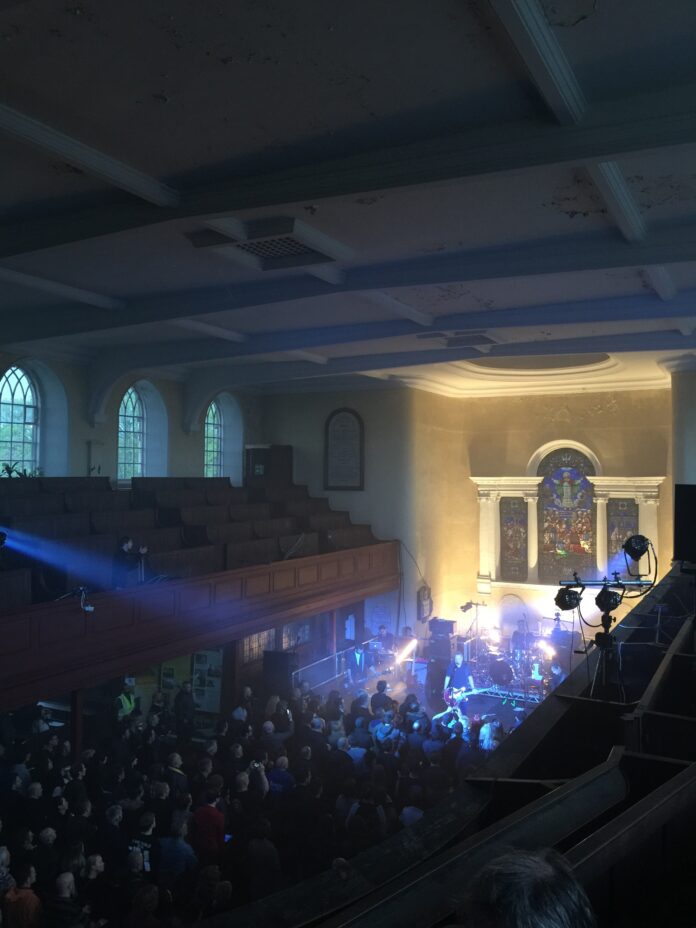 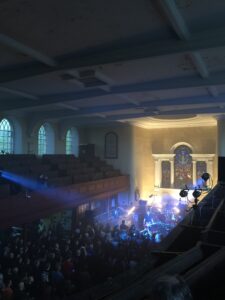 Christ Church in Macclesfield is a suitably red brick imposing looking gothic church set against the grey skies of late May northern England. Skies that threaten rain and thunder just like John Wesley preached from his 12 trips to the church just after it was built in the 18th century silk town.

Macclesfield has a curious history – a town of silk and not cotton that is coming to term with the 21st century as  one of those towns in Cheshire to the south of Manchester that is defying the mega city’s gradual take over of all surrounding places. It’s past clings onto to it for ever like a fine silk and it feels far from the making rock n roll crowd which makes it an unlikely location for one of the great lost voices, Ian Curtis, whose voice echoes down the generations and whose suicide 35 years ago to the day is being marked by one of his band mates in the church tonight. This gives the town one hell of cultural legacy – the home town to one of rock’s greatest poets – a romantic voice from the post punk wars whose words and voice affect millions more people today than they did at the time.

In a remarkable set his former band mate and lead bass guru, Peter Hook is playing through every single song in the Joy Division catalogue in a celebration and commemoration of his former band mate who creativity briefly flickered in the punk and post punk period. A period that put Manchester on the future music map and created  a legacy that no one has fully come to terms with yet and has expanded into a huge status that the band at the time didn’t have.

When Ian Curtis hung himself at his then home on nearby Barton Street Joy Division were a band on the cusp of a breakthrough, 35 years later they are a recognisable worldwide brand – you see that logo everywhere and Ian C has joined the pantheon of the greats and his gaunt face stares out from everywhere with his talent and that of the rest of his band recognised far away from the fierce underground status of the band at the time.

Now that the main players are beginning to leave the stage one by one it seems like one of them will be there forever.

Ian, Tony, Rob, Martin – all geniuses in their own ways have left the building but the indefatigable bass player Hooky remains steadfast on the stage in an astonishing three hour set where he is playing his way through the whole Joy Division catalogue to mark the 35th anniversary of Ian Curtis’s death.

With a catalogue and occasion like this it can be no normal night and emotions are seesawing all over the place in the beautiful old church hall. The power of Joy Division’s music is still affecting after all these years and one of the key constituents was Peter Hook’s bass. Even with those soaring high up the neck bass lines being played by his son tonight giving Hooky a chance to sing with full force  you are still captivated by their originality and melodic brilliance.

Hook may have spent decades downplaying his role in the band with that typical gruff northern bluffness but his bass lines are things of true beauty and were almost without precedent in rock at the time. Coming from period when the bass guitar was being pushed to the front of band’s sound- a legacy arguably started by JJ Burnel and then taken in all kinds of directions, Hook was the ultimate re-moulder of the bass guitar as the lead instrument. The simple yet complex nature of those lines plus the rest of the band’s brilliantly imaginative capturing of the atmosphere that hung around post punk UK and their singer’s stunningly sensitive and poetic lyrics was the key to the band’s eternal sound.

Joy Division were so perfect that it would seem almost impossible to revisit that holy catalogue and on paper this really should not work. Hooky is the only original member on stage tonight, with his aforementioned son and the rest of one of his later bands, Monaco making up the band, he deals the vocals with occasional help from Happy Mondays singer Rowetta and it sounds great. A perfect tribute to a set of songs that have grown in importance and power over the years with Joy Division becoming one of the staple rock classic bands- a million miles away from the cult heroes they were when Ian died.

It’s touching and powerful and the music’s raw power and incurable romantic dynamics are explored in a set that runs in a rough chronological order that makes you realise that there was not one duff moment or wasted note in the entire cannon. They really were one of those perfect bands and this masterful take on the catalogue is far away from nostalgia for an age yet to come but more like a celebration by one of its key architects.

The bass was the backbone to the Joy Division sound and all night you are transfixed by the way Hooky created this endless supply of bass lines running up and down the neck, with those delicious runs and unexpected twists and turns that gave the songs their poignant and yet powerful backbone that’d defined the band utterly.

They had a melancholy and beauty to them but also a tidal wave of power, there are rhythmic twists and searing runs and always a quicksilver melody that make Hook one of the great bass players. And the music was so diverse – Heart and Soul is as throbbing and ghostlike as ever, Decades drips that unique north western melancholy, Transmission is a pummelling and climatic riot, She’s Lost Control is as affecting and clipped as ever, Love Will tear Us Apart sounds like an avalanche of power but with the underlying lament about the fragile power of love still kept intact and defies a broken vocal mic to still sound resounding, Disorder builds with its own unique tension and all the band’s different periods are dealt with a crafted care.

The band is respectful of the songs innate brilliance and the unique ebbs and flows and when Rowetta comes on to sing Atmosphere and a clutch of the tracks her voice gives the music a fascinating twist with her powerful voice that evokes the guttural raw power of an early Sabbath Ozzy even are an emotional rock power – the same kind of emotional pain turned into the powerful yelp of a very British urban blues. Rowetta really adds something to the songs she sings and underlines their emotional power like true fan.

What should have been the weak link, Hooky’s voice, is another strength with his voice being more than adequate – the tenderness and sensitivity of Ian Curtis baritone is, of course, impossible to replicate but Hooky sings with a conviction and emotion of his own and the insight of someone who was in the TJ Davidson rehearsal rooms with Ian Curtis and watching and waiting for him to dip into his bag of lyrics and come up with another slice of lyrical genius to add to the latest band jam.

With all the proceeds from the event and recording to benefit Epilepsy Society and The Churches Conservation Trust this is a gig with a reason.This is no cabaret but a powerful and affecting tribute to one of the great bands. This is no smash and grab Joy Division oven glove take on the past back catalogue that will always define the future but a lovingly restored live rendition that has been given a  loving polish by one of its key players.

Joy Division’s legend can only grow and grow and with Hooky on what seems like a permanent world tour playing this mesmerising music you really have to go and see him and play before he to bales out from the stage and the final chapter on one rock’s most heartbreaking stories is completed.