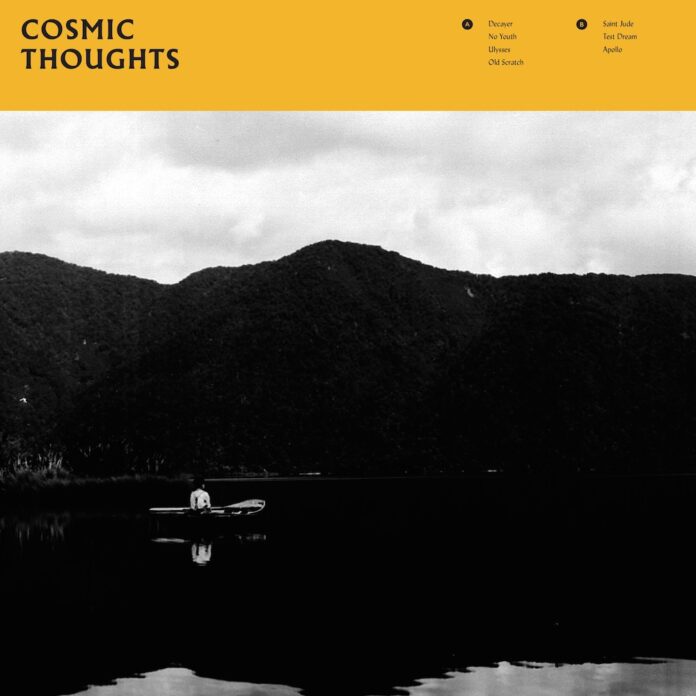 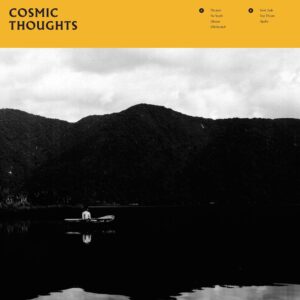 Louder Than War make a rare trip down to South East England and come back with a brilliant album by a band channelling, amongst other things, the sounds of one of our favourite North West England bands. Cosmic Thoughts are that band and we’re stoked to be able to share with you their debut album, one that proves that DIY releases can be as assured and confident as any major label offering.

“Another young pretender has arrived on the scene. From everything we’re hearing there’s potential in them. Potential in Them.”

Cosmic Thoughts have been together since 2010 and after four previous releases they’re now ready to launch their first album onto the world.

When first approached about streaming the album names such as Sonic Youth, Joy Division and Neu! were dropped, all of which, it turned out, with justification. As you can imagine, an album that has shades of all those bands is going to be quite varied and that’s the case here – but at the same time the album has a certain vibe running through it holding it together, a vibe that’s dark, moody and soaked in the atmosphere a Joy Division, say, but that also has the pounding drive of the best krautrock bands.

Cosmic Thoughts all come via the DIY punk and hardcore scene and feature former and current members of several such bands, namely November Coming Fire, Man Hands, Mass Lines and Kid Pang amongst others. But they’ve built on those foundations and have evidently been influenced quite heavily by post-punk bands of the late 70s to late 80s, ones both from the UK and US. Central to their ethos though has always remained a true belief in the power of DIY.

Over to the band say:

“All of this has been crafted by a small team of like-minded people that like us, hold punk and DIY values above any notions of using the genre as a vehicle for short-term personal success. The project has been self-funded, with all areas of the production and release handled by the band and the lovely people at Hot Salvation, DLPR and Cult Culture, to ensure the highest quality release for the best possible price without compromising any values whatsoever.”

Before anyone gets the wrong impression (i.e. that this album sounds dated) that’s definitely not the case. This is an album as current and vital as any contemporary release by any contemporary band. In fact they remind me of “band of the moment” Eagulls to a certain extent. You’ll remember we’ve been banging on about Eagulls for years and finally they seem to have broken into the big time – their current tour has seen them playing to sell out audiences (so much so that I couldn’t get into their Bristol show) across the country – and if the same happens for Cosmic Thoughts it’ll be entirely justified.

The press release has the following to say about the album:

After putting out the self-recorded ‘No Youth’ live demo last year, the natural progression was to form a complete set around the piece, and capture a full performance for general release. The seven pieces explore the main compositional and aesthetical contexts of that initial track to further extents – the driving, layered and dense post-punk of ‘Decayer,’ offset against the cold, aggressive post-hardcore of ‘Saint Jude’ anchor more abstract ideas on the brooding, hypnotic ‘Ulysses,’ and ‘Apollo’s’ contrasting, thumping art-pop. The beginnings of repeato-instrumental experimentation in ‘Test Dream’ and ‘Old Scratch’ also balance a record that takes strong inspiration from unlimited mid-to-late twentieth century pop music styles without trite “retromania” that has a such strong-hold on current pop genres, and pushes what the band deem simply as their take on ‘punk’ forward, ever forward.

Also laudable is a belief in trying to help vinyl production survive in this country. To that end designer Daniel Burrows has imagined the physical record and it’s been pressed on high quality 180g vinyl, with matt-reverse board printing for the incredible sleeve.

The record is coming out via many figures within UK DIY scene, people who share a certain ideology that the quality of content and the project comes above all things, regardless of trend, and people who think that punk can expand beyond its often limiting creative boarders but still retain all DIY integrity! These include long-time collaborator Ben Phillips at Lightship 95 Studio in London who caught the set live in October and Alan Douches who mastered it in New York by in January 2014. The project is being fully realized by new label Hot Salvation, co- run by Cosmic Thoughts’ own Mark Watts and George Clift with his partner Natalie Barker. And finally, joining them on this project is Chris Barling at Cult Culture and Meesh Wood at DLPR.

Details about pre-ordering the album as well as a list of upcoming gigs can be found below the stream:

Cosmic Thoughts have the following performances lined up:

More music by Cosmic Thoughts can be found at their Bandcamp: cosmicthoughts.bandcamp.com. They’re also on Facebook and Twitter as @cosmic_thoughts.