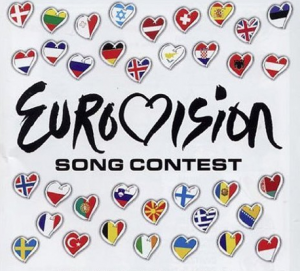 This year gets an added twist with the current geo political situation making Ukraine’s entry rather nervous-will that nation even exist when the boom bang a bang over Eurovision hauls its sweaty and silly carcass onto our screens and as for the fixed voting will them Easties all vote for each other when war is in the air? perhaps, despite the squeals of the Woganites, those damn East Euros all vote for each other because big haired, histrionic power ballads are the kind of thing they like- super amped up, heart pounding, folk ballads that strike a chord with their Slavic past sung by big chested women and big chested men is, like Eurovision, taken seriously by the fellow gonzoid TV audiences over there, whilst in the UK it’s all a camp joke, a popcorn munching experience in silliness and a graveyard of dreams for another young hopeful, another lamb to the slaughter- all abit like the world cup then where we fluctuate between slavering golden genration nationalism and terrified irony.

This years’ entry seems like a nice girl trapped singing another dreary power ballad but at least she is far away from that stupid band thats dressed as air cabin crew-perhaps the worst entry ever – who came last and started this whole bizarre notion that there was some kind of fix going on from the cultural conspiracy crew.

Every year we charge in with our British Empire chests puffed out high claiming we are a shoe in for victory and those dastardly foreigners were fixing it to stop us winning. ‘How come the land of the Beatles, Stones and endless great modern pop culture that our national radio ignores cannot win this piece of fluff!’ we shriek, as the latest entries prance about in the grand tradition of Bucks Fizz and slump to bottom of the points table whilst the Europeans look on puzzled as the ‘land of the Beatles etc’ send over the kind of gloop that the music business thinks is music whilst it wilfully ignored all the talent that pours out of the nation. Because that’s the true joy of the whole mad parade- we get a glimpse into the dead zone of the music business itlsef – the bow tied, caviare munching, friends of Charlie who back slag at award ceremonies who think that this is what music should sound like- “If you want a vision of the future, imagine a the boot of Simon Cowell stamping on a human face – forever.” as George Orwell once nearly said.

Why the hell they don’t send over a talented young band and give them a break, a weird break admittedly, is baffling. What is there to lose in bunging on a hardcore band or a really talented young singer or one of the endless great guitar bands or an electronic wizard chnaging music for ever- gimme a ring and I’ll send you a list of great young talent and who cares if they lose? at least they would have been good!

But would any of them dare do it now? Eurovision is the graveyard of dreams where we laugh and then stomp off in a huff because no-one takes our comedy entry seriously.