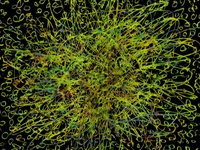 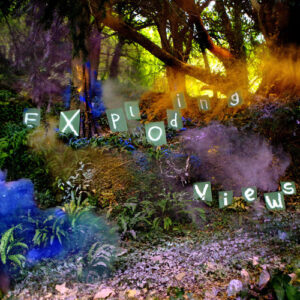 We all know Bristol is awesome right?

We all know how much good music has come from this fair city over the years.

It is a melting pot of cultures that cross-pollinate and influence until bursts of colour and sound explode forth from its creative community. Seemingly devoid of London’s elitist pocket scenes, Bristol’s heart and soul is its inclusiveness and individuality that nurtures talent passionate about its obsessions.

Sam Wisternoff, aka SJ Esau, has been developing his unique musical style on the Bristol music scene since the late 80s in which he was a barely adolescent MC and through some impressive releases via the Californian independent record label, Anticon. His debut, ‘Wrong Faced Cat Feed Collapse’ in 2007 and second album, ‘Small Vessel’ in 2008 have seen him flower into the ‘Indie Rock’ experimentalist we find before us today.

‘Exploding Views’ is the sound of an artist really hitting his stride. His former releases didn’t get great reviews in the press, but this is definitely about to change. There is a fiery energy to this release that is hard to ignore. Opening track, ‘Soul II Skull’ is a crackling firework, bristling with intent and combustible definition. As the chorus so rightly exclaims, “I couldn’t hold it back, it’s simple”. A rapid chemical change happens in your brain as you listen. Parameters are felled as the infective rhythm and melody burst like an overdone potato. The butter and cheese of his ingenious lyrics are slavered all over the album, and in ‘Stubborn Step’; his story telling is seasoned with a linguistic salt and pepper of staccato harmonies, that is quite a delicious meal.

‘Forceps’ is a memorable slice of start / stop, loud / quiet dynamics. A powerful and at times metal heavy tune that will have you grinning and pressing repeat on your iPod all the way to work. ‘Who Isn’t?’ and ‘Why Angry?’ poses a much mellower vibe altogether, heavy on the toms but so infinitely sing-able, your neighbours will be infuriated. ‘The Pull’ takes a left turn to ‘Triphop’ with guests, Doseone and Charlotte Nichols on vocals duties. The lush languid cello vibe tips a hat to past masters such as Tricky and Massive Attack. It’s a head bobber.

The experimental elements and sonic exploring freshen each track, so much so that it’s logical that ‘Make Space’ bubbles and blips to a truly pulse racing conclusion. ‘Perspective Parade’ has a clever cut-up vocal technique in which everyone from the vicar to a passing child gets to have a crack at the word play. “I can’t be held responsible for what I might have said twenty minutes ago at all, that was then, I am a different person now even though there’s a passing resemblance.” It’s fun and funny, shape shifting at every syllable until the musical relief releases you to ‘get down’ and dance around your room like a loon.

There is no doubt, this album will widen SJ Esau’s audience and hopefully put him on the map next to fellow Bristol independent artists such as Olo Worms and Oliver Wilde and the truly inspiring homegrown talent that makes the place special. Tracks like, ‘Remotely’ display a more sensitive songwriter, set apart from the overall quirky and frenetic nature that most of his songs possess, but especially, ‘What Is It Now?’ that sounds like the nervous breakdown of a children’s television presenter. Last tune, ‘No Journey’ is a bombastic noise creation, interspersed with some very trippy moments of deliverance. Playful to the end SJ Esau are here to entertain and amaze, and I am amazed. It is a triumph of the independent spirit that the city of Bristol produces so much of.

Sam’s website is here: sjesau.co.uk. Also make sure you check out his Soundcloud page and if you do the social media he can be found on Facebook and Twitter.