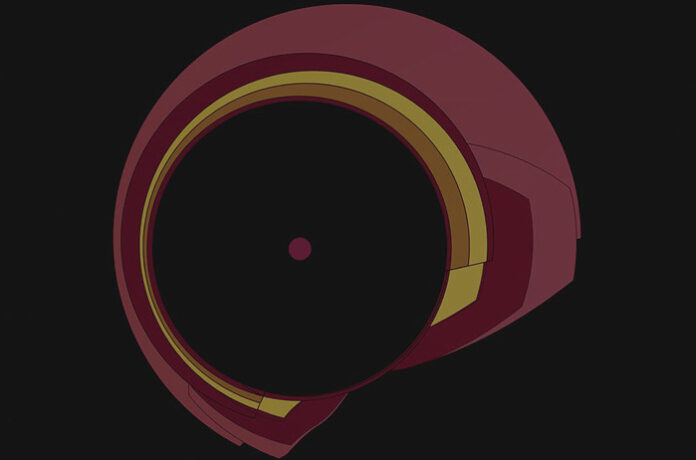 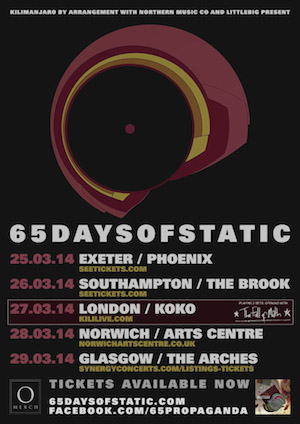 65daysofstatic perform The Fall Of Math

First up Nathan Fake brings an overwhelming noise that reaches all the lofty crevasses of the resplendent Koko. The brooding mass of sound seems to indicate that his support slot will be an intriguing, challenging one. This is, of course, what 65Kids have come to expect from the acts the instrumental band selects to support them around the country. I recall the last time I saw them in this magnificent venue they brought together the unlikely coupling of screamo-math-metal band Rolo Tomassi and the “Dench” cheese of rapper Lethal Bizzle.

Luckily, before bodies were crumbled by Fake’s wall of whale sounds, there emerged some skitty drums. They served as something to hold on to, a bit of hope. Then sub-bass-filled big beats kicked in. This powered around the cavernous venue as light ambient sounds acted as the lead part, over the top. The thunderously dark, deep bass and tambourine-like percussive sounds, which kept the time, characterized the rest of Fake’s set.

With Nathan twiddling knobs and looking down at his sample pads the audience lacked a focal point. As such there was not much reaction from the crowd and wishes were made for a big private dance space or disco maze. When they get round to making one…

Onto the main event. The reason why everyone is here; to witness the pioneering album that started 65daysofstatic’s endless life of touring a decade ago. This record paved the way for modern instrumental bands such as maybeshewill, And So I Watch You From Afar and sleepmakeswaves. Their influence can also be seen beyond the underground, instrumental, progressive rock bands as pop songs now exploit glitchy beats first heard on their debut The Fall Of Math.

The forewarning at the start of The Fall Of Math in Another Code Against The Gone bears close resemblance to that of the opener of new album Wild Light. It sets the scene for music that can paint a picture of a post-apocalypse landscape.

Joe Shrewsbury adds more jarring guitar into the live rendition of Install a Beak in the Heart That Clucks Time in Arabic that precedes Retreat Retreat and which has remained a triumphant feature on every set they have played over the past ten years. In stark contrast comes Default This, a track they have never before attempted to play because it is, in their own words, “fucking strange”. It is one of those tunes that can fascinate or beleaguer individuals and draws comparisons with Aphex Twin.

Respite from the forward-thinking rock comes in the form of the writ by candlelight number The Last Home Recording. Rob Jones restrains himself and mercifully plays as light as a sponge upon the kit for once. Like all the other tunes that get aired in order tonight it has stood the test of time, still sounding challenging and relevant.

The second set is constructed almost entirely of tracks from their new album Wild Light. They open it, as was the case with their previous Wild Light UK tour, with the double header of Heat Death Infinity Splitter and lead single Prisms. These songs demonstrate well how they have moved on and how, musically, they are currently somewhere between the combination of their last two outputs. The old-school 65, pioneering post-rock meets The Prodigy of 10’s We Were Exploding Anyway and the catchy motif meets ambient passageways from the 2011 Silent Running soundtrack.

A few things remain the same, aside from the awkward song titles. The most notable is how ahead of the game they still are and how this sounds like a rave from the future. I wonder if the world will have caught up with this one in ten years time. The opening duo alongside latest single Taipei all display the stop-start dynamics, and which dominate Wild Light, that can prove an obstacle for listeners to really get into the music. You cannot just keep nodding your head to a 4\4 beat! However the soundtrack-esque habit of repeating motifs, often on piano, manages to give you enough familiarity to hold you steady. This is never better illustrated than by the delicate piano in The Undertow, which also exposes Simon Wright’s expert ability on the bass, playing both firmly and delicately high up the fret board.

Never ones for straightforward song writing Unmake the Wild Light draws upon their soundtrack-making experience by projecting powerful dark and edgy feelings before dragging you down a windy burrow. “Ten more years” was the chant after one particularly confusing collision of a song, where movie-music and lofty neon rave fought for control of the wheel.

All words by Bruce Cousins whose Louder Than War author’s archive can be found here.