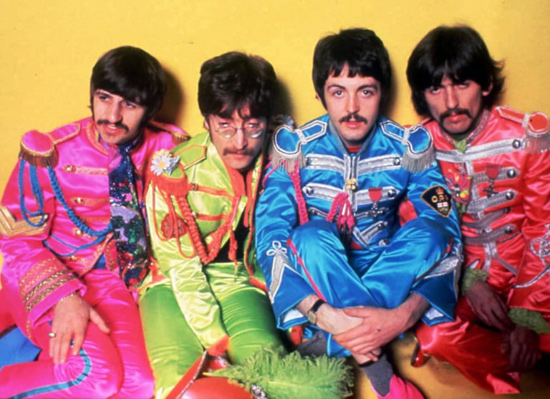 Love them or loathe them, one thing you cannot deny about the Fab Four is their influence on popular culture as we know it. It’s been almost sixty years since these four lads from Liverpool made their mark on an unsuspecting public; their exhilarating mix of harmonies, ballads, heavy duty rock ‘n’ roll riffage and out there musical experiments having reached out to generation upon generation of music lovers, and with their back catalogue having finally been introduced to Spotify and several other big streaming services it looks as though they are about to reach out to several more to come. Bearing this in mind, to give newcomers and sceptics more of an idea of the actual scale of their power (if such a thing is needed) I decided to set myself a task: scour the internet for as any interpretations of their work as it’s possible to find and whittle it down to a list of ten of the most enduring Beatles related covers. I say ‘Beatles Related’ as  I think it’s only fair to include covers of their various solo tracks too. It’s no exaggeration to point out that you could almost certainly litter the entire planet several times over with recordings of their work, so what may sound like a fairly simple, straightforward task in print is actually a bit of a bugger when actually tackled. Nonetheless after careful consideration and much umming and aahing I’m happy with my final selection, inevitable niggling omissions aside. And no, before you ask Leo Sayer’s ‘I Am The Walrus’ did NOT make the final cut. In no particular order…..

1. Nina Simone – My Sweet Lord/ Today Is A Killer

Taken from her 1973 album ‘Emergency Ward’, this 18 minute rendition of George’s first solo smash hit is a musical tour-de-force which doesn’t so much go up to 11 as blow up all the amps and tear down the entire PA system in the manner of Hurricane Katrina with PMT. Recorded at the Emergency Ward at Fort Dix before a group of black soldiers and interspersed with a reading of The Last Poets’ ‘Today Is A Killer’, this is a performance for which the term ‘epic’ was surely invented. Hearing the troops cries of ‘we want Nina’ before the start of the show is spine tingling enough; add to this the rich, bewitching tones of Ms Simone, the otherworldly gospel vocal backing and the fevered, apocalyptic thrust of the backing band, the whole thing is as close to the feeling of stepping into God’s living room a staunch atheist like myself is ever likely to get. George may have been a bit of a hippy, but without him this magnificent piece of musical mayhem would never have existed, surely enough to earn him a modicum of respect in your Beatles hating heart Mr Cynic? (Or ‘Mrs’ – Right On Ed).

The B-Side of ‘New Rose’, Britain’s first official punk rock single, this gleefully irreverent stomp through the title track of the 1965 Fabs film seems to sum up the essence of the punk movement in one. Under two minutes long, lo-fi as fuck yet with a raw vitality that smashes its way through the sound limitations with all the might of a Bull savagely goring a Matador, whilst also bringing to mind the proto punk psych workouts of sixties legends such as Love and 13th Floor Elevators, this is a perfect slice of gonzo punk-pop-pill popping abandon guaranteed to put a smile on the face of even the most po-faced of Beatles purists. Known to provoke strange, uncontrollable actions if listened to loudly on headphones in public places.

3. Ted Chippington – She Loves You

I first became aware of Ted Chippington through reading LTW boss John Robb’s book ‘Death To Trad Rock’, in which the author declared Mr Chippington his favourite comedian. Delivered in a flat West Midlands monotone to a Blackpool cabaret night musical backing, this peculiar piece of anti-comedy is very much in the ‘shouldn’t work but does’ school of thought. Despite heavy rotation by Steve Wright this 1986 single was not a big hit, narrowly missing the top 75, perhaps a touch too idiosyncratic for the general pop audience of the time. Like much of Ted’s comedy, you’re not quite sure exactly why it makes you laugh, there’s just something intrinsically hilarious about turning a euphoric pop anthem into a sardonically downbeat spoken word karaoke slow burner, with references to the mass unemployment of the time thrown in for good measure. Stewart Lee is also a fan.

4. William Shatner – Lucy In The Sky With Diamonds

Another spoken word piece, although this time it’s not clear if there’s a joke involved. Sounding hilariously (almost painfully) earnest, this gloriously over the top piece of theatrical psychedelia, taken from Shatner’s debut album The Transformed Man, is a strangely compulsive slice of musical dementia. Universally panned and derided by critics, Trekkies and music fans in general at the time of release, this 1968 recording has received a little more respect in more recent times thanks in part to the patronage of Ben Folds. The highlight is surely this surreal tribute to the Fabs, kind of like King Lear meets the Merry Pranksters only even more deranged, Shatner’s alarmingly dramatic delivery coming across as both hilarious and horrifying! Certainly miles better than Sir Ronald McDwight’s bestselling version.

The highlight of Paul’s debut solo album ‘McCartney’ gets the Faces treatment in this stunning remake which takes on a life of its own. This live performance just oozes class and seventies retro cool; Rod (the coolest frontman on the planet for a brief period in the early 70s) looking immaculate in his white suit and expertly permed hair, rasping out the words in those inimitable croaky soul boy tones, amply complemented by the powerhouse rhythm section of Ronnie Lane and Kenney Jones as well as the haunting organ sound of the late Ian ‘Mac’ McLagan. The solo horrors of ‘Sailing’, ‘Hot Legs’ and ‘Do Ya Think I’m Sexy’ weren’t far around the corner sadly, how something this utterly perfect could go so utterly tits up is a mystery on a par with the whereabouts of Lord Lucan, but right here, right now Rod Stewart seemed unstoppable in his quest for the holy grail of white soul. Phenomenal.