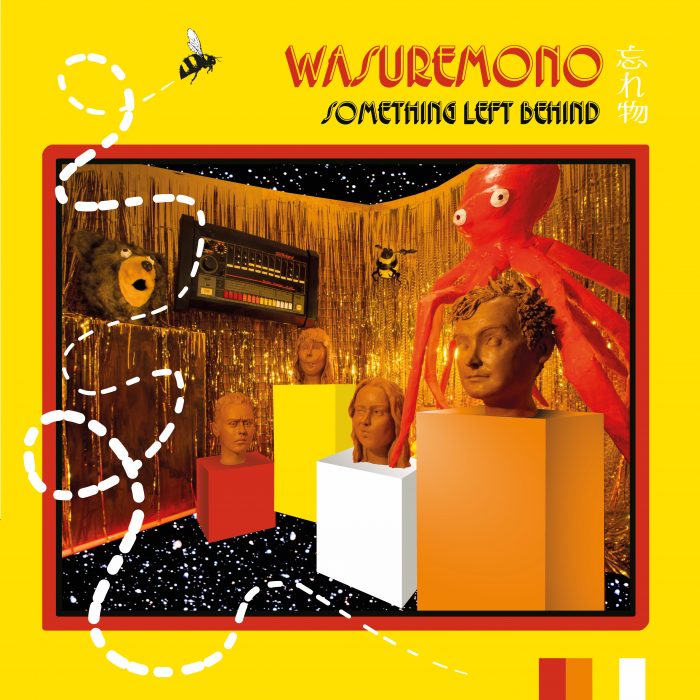 However you’ve reacted to Wasuremono in their short existence so far (and it had better have been favourably, matey) they’ve outwardly felt like Will Southward’s band. Listen to 2016’s head-above-the parapet, Lamacq-enlivening EP, Kaboom, especially the 6Music-backed singles, Cuddling and Alligator, and you’re hearing his falsetto, layered over the motoric low groove of his tuned-down guitar. Add in the DIY sound engineering (Will), production (Will) and painstaking mixing (guess who…) You get the picture.

Yet the collective talent and the collective effort has, of course, always been there. Cuddling would not be as cosmic and soaring as it is without the starship synthesiser enterprises of Madelaine Ryan. Will’s drop-D guitar lines wouldn’t goose your grey matter in such a titillating fashion if they weren’t also rubbing up to Phoebe Phillips’ bass notes. She is the band’s graphic design maestro, the wizard of sleeves. All of this is underpinned by the dynamic, metronomic, charismatic Isaac Phillips on the drums.

Not only is Something Left Behind Wasuremono’s first full-length release, but it is also palpably a ‘whole-band’ record. Everyone is up there in the arrangement and the mix, but synths definitely rule the (sound)waves on this occasion, putting Madelaine at the helm of the starship, perhaps recasting Will in the role of Spock. Opener, Checking Out, has a moody Ultravox-style intro, a slow march, followed by a majestic keyboard flourish. England’s Slave has a lighter feel, with a tinge of Saint Etienne and Dreadzone.

Devotees of vinyl, they have arranged the album meticulously to suit a Side A/Side B schedule. Track 5/Side A closer, Holy Now, is dystopian and cinematic. With its deep drumbeat and sense of foreboding, you could play the film Apocalypto over the top of it without any need for editing. Side B starts with the stand-out track, Cold Tadpole, full of the artful abstraction of early Vampire Weekend. Put this on at the next wedding reception you go to and everyone, from your two-year-old cousin to crusty old Uncle Knobhead will be up to dance to it. Rest In Peace signs the album off with an indie-disco Love Cats-style stomp for similar purposes of joyous flailing.

The first single from the album, For All The Bears, is probably the closest to their previous sound, with the addition of manic strings and a video featuring the fifth band member, Will’s dog Olive. For Years plays with compelling rhythms, Isaac on drums seeming like some percussive octopus. Boogeyman, rather than enabling them to unleash their inner Boney M, feels otherworldly, like a Bowie/Eno collaboration. There’s a Brian Cox documentary out there somewhere that’s missing this song.

The self-referential album title (the closest translation of their Japanese name) has to be some form of double-bluff. You’ve got more chance of accidentally walking out of the house bollock-naked than forgetting about Wasuremono.

Watch the video for For All The Bears here:

You can find Wasuremono on t’Internet here. They are also on Facebook, Twitter and Instagram. You can hear more from them on SoundCloud and Bandcamp. They’ll be playing the album at Rough Trade, Bristol on March 31st.