Home Music Reviews Album Reviews Various Artists: How Is The Air Up There? – Album Review 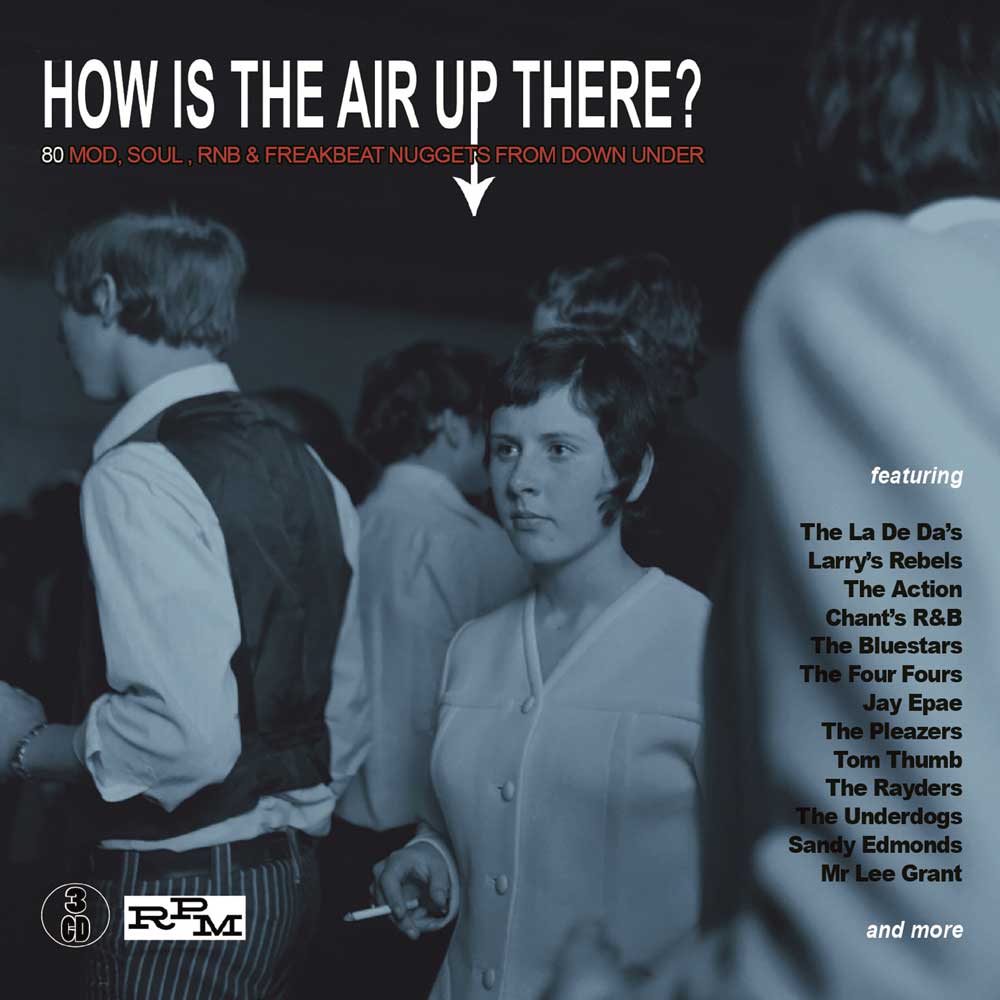 How Is The Air Up There?

Subtitled “80 Mod, Soul and Freakbeat Nuggets From Down Under” with this boxset New Zealand’s contribution to 1960s music is recognised and local heroes Chants R&B, Larry’s Rebels and Ray Columbus And The Invaders all feature……Ian Canty travels through time and space beyond the Southern Cross……

New Zealand, as the sleeve-notes to How Is The Air Up There? succinctly notes, is the furthest country away from the UK, but also the country most like the UK. So as the explosion of youthful vigour took off in Blighty during the 60s, it was natural that NZ would want to follow suit. There was still an influx of migrants from Britain (and indeed other countries, as we will see) arriving there on a regular basis and among their number would be teenagers who had witnessed some of the pivotal events first hand and would be eager to set something of a similar nature going in their newly adopted home. It would not be a standing start however, as some of the settled population had already heard reports of the Beatles, the Stones etc and adjusted their efforts to take account of the swift changes at work in Pop Music at the time.

Being at the other end of the world from “where the action is”, it took some time for fashions and trends to percolate their way through. New Zealand has a different climate as well, so any new “Mod” clothing wouldn’t exactly be appropriate to the weather. So it could be that the NZ scene lagged as much as a year behind the trendsetters in London. Ultimately it didn’t really matter that much at all – as How Is The Air….. shows, the kids there just got on with having a whale of a time and in the course cooked up some of the best music of the era.

Much like their near neighbour Australia, New Zealand youth tended towards hard end of the spectrum with their versions of the styles being pioneered elsewhere. They also mostly looked towards the States for inspiration. Judging by the contributions here, they were particularly adept at Garage Punk. This form, along with the fellow retrospectively named style of British Freakbeat, acts as the basis for most of the efforts on disc one here.

The three discs that make up How Is The Air… are broadly split in Garage/Freakbeat on disc one, moving more towards Pretty Things’ R&B type Rave Ups on disc 2 and finishing with hardcore Soul and Pop on the final platter. Some bands crop up more than once, as back then you didn’t necessarily have “Garage Punk bands” per se, they generally turned their hands to more than one style to keep the teenagers at the dances and shows happy.

For instance The La De Das (by some distance my favourite band name of the moment) feature on all three and they acquit themselves marvellously in each style. Their title track that leads us into this compilation, is a Stones/Garage grinder with driving Farfisa and a load of snotty attitude and Don’t Stand In My Way is in the same style, complete with a killer organ break. On Top Of The World mines a more R&B mode, with a neat version of the Small Faces “Whatcha Gonna Do About It” emphasising their Mod appeal. This is further enhanced by their Soul-flecked beauty Jump Back on disc three. They could do it all!

Having established the swellness of the La De Das, all I can suggest here is that you buckle yourself in and hang onto your hats, as there is a metric tonne of good stuff on these three discs to get through. On the first CD Larry’s Rebels cover the Creation’s Painter Man and if is doesn’t quite have Eddie Phillips’ bow-bending mayhem, they make up for it with heads-down Garage Punk power. Their I Feel Good, after a “C’mon Everybody”-style start, crosses Punk and Pop in an original and fresh manner. The Rayders come up with the perfect Mod mash-up with A Working Man, which marries Who high harmonies and musical frills to a more Soulful Small Faces vocal style. Christchurch’s own Chants R&B raise hell with their riotous cover of John Mayall’s I’m Your Witch Doctor and Tom Thumb (a group not a solo artiste) score with group original I Need You, a bass-heavy sound clashing with wonky organ riffs and near-hysterical singing in a winning way.

Former Cavern regular and ex-pat Sandy Edmonds brings a feminine touch to her fine Come And See Me and she is backed on this by the Pleazers who also provide their own Punky Hurtin’ All Over and tough R&B on Is It Over Baby?. Get Out Of My Life, Woman, by the Roadrunners has a “Taxman” rhythmic attack with some great fuzz, quite why HMV failed to sign them on receiving this recording I cannot say. Sadly, though Phillips were interested, the band had decided to split after the HMV setback.

Onto disc 2 we move onto slightly more towards R&B/Blues/Mod-based styles, but it in truth is only a marginal adjustment and the thrills keep on coming. The Selected Few cover the Pretty Things Get The Picture and do it justice, with the Roadrunners’ powerful version of the Pretties last hit (penned by Ray Davies) A House In The Country being good too. The Identity are a bit of a mystery band with no info in the sleeve-notes (further searching on-line revealed the sum total of bugger all) but their unreleased Just Out Of Reach is full-on 60s Punk and pleasing with it. The Bluestars had already released a single for Decca in Please Be A Little Kind, but the record company passed on their contribution here Don’t Want To Be Lonely Anymore. That is another head-scratcher as it is ace, with some slight surf influence on the wild and wiggy guitar line.

Ex-frontman of the Convicts Judge Wayne brings in a little Soul on his raucous Little Miss Rhythm and Blues and after shocking NZ society with his wild stage show, promptly returned to his Australian homeland. The Munsters’ Theme is invoked on Terry Dean And The Nitebeats’ Bus Ride and Woman by the Principals is a superior piece of Bluesy Pop. Larry’s Rebels are back with Beat-toned marvel She’s Mine and the Action (nothing to do with the UK band of the same name) show that Folk Punk was alive and well in 60s NZ with the moody Day By Day.

Now on the final platter we find the acts here working with a much more Soul influenced palette – there are many examples featured that could have easily made a big splash on the Northern Soul scene. Also there is a great deal of Pop appeal on show too. For instance All Night Worker by seven-piece Soul band the Newsounds (headed up by Dagenham’s own Ray Woolf) and Peter Nelson And The Castaways’ A Little Lovin’ Somethin’ are both infectiously danceable. The Action from disc 2 return and Somethin’ Fresh by them is indeed that, Pop with a nice side serving of Fuzz and the Soundrells belie that ultra-Punk name with a sweet and mellow chorus on the catchy I’m In Love With A Stranger.

Neighbour, Neighbour by Chants R&B follows their usual hard rocking approach, but manages to squeeze in one of our few sightings of Psych on this box as well. Gene Pierson’s (real name Giancarlo Salvestrin, a native of Casvaso Del Tomba) has a great Soul voice and uses it to good effect on both Love Love Love and the brilliant You Got Me. Similarly Bogdan Kowinowski from Poland became Mr Lee Grant on his entry into the music world down under and adds a serious groove to his two tracks Love and particularly As Long As I Have You. The Pleazers do a version of Security which prefigures the Saints take ten years later and the fuzz-laden but slower dance-craze beat of The Creep by Jay Epae brings How Is The Air Up There? to an end and what a trip it was.

I’m not going to mince words – this is pretty much excellence from beginning to end. I’ve probably been a real sight (Dad) dancing around my kitchen listening to this, but you can’t keep still with such winning rhythms and hooks. A great box set and conclusive proof that while New Zealand might be a small country, it bowed down to no-one when it came to producing enjoyable, original and irresistible sounds in the 60s. They might have been behind the cutting edge, but in terms of putting things into practice, the music here proves that in the 60s NZ was as good as anybody.