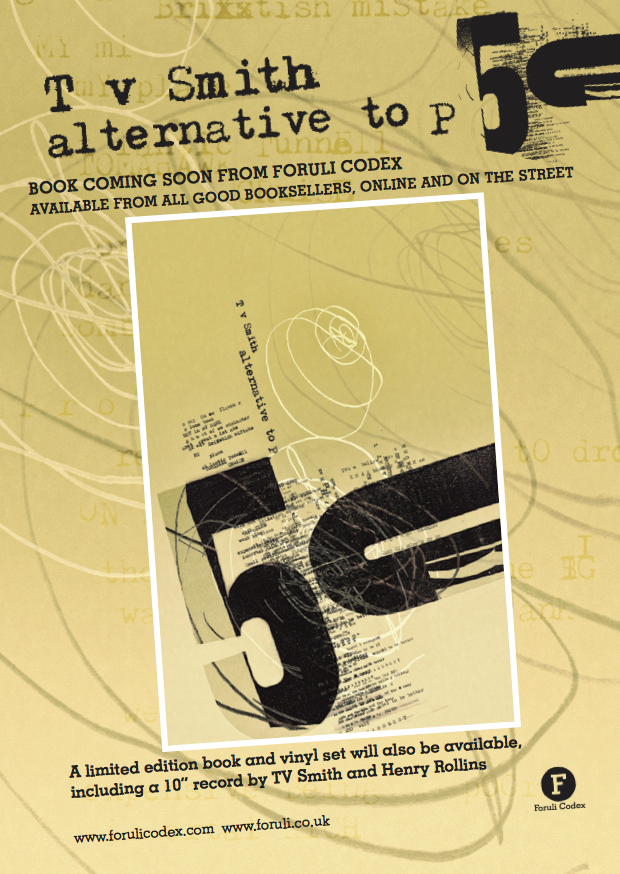 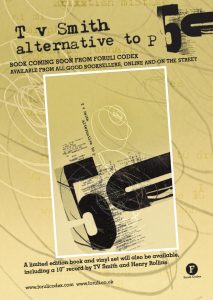 Rock and Roll has seen it’s share of frustrated poets adapt their craft to song lyrics and achieve recognition. From Jim Morrison through a gamut of New York “new wavers” such as Patti Smith, Richard Hell et al to UK artists such as Wilko Johnson and the cream of punk rock lyricists, TV Smith.

As TV said in a 1980’s interview, “If just for me I’d still write poetry and sort of wallow around self indulgently and not care less whether anyone else liked it, but it’s a very important dual standard that you write your things and try to relate it to what everyone else is going to think of it”.
Even Tim’s early work with The Adverts was several cuts above the majority of the Glam inspired terrace chants put out by many punk bands. Although he obviously believed (and still does) in the ideals of punk, he also understood it’s limitations which very few did at the time. As well as challenging the establishment, he was also challenging the other challengers.

Anyone who has followed his career will know that he has continued (and improved on) these high standards to the present day.
So in the year of punk’s 40th anniversary what does TV Smith do? Does he put out a lyric book, tart it up with a few picture, hand written sheets etc. etc. and charge up to 350 quid for it? Oh no! Always seditious, he presents 50 of his songs as a poetry book for about a tenner!
Now there’s been a long debate as to whether “pop” lyrics can actually cut it as poetry. The poetic cognoscenti maintain that song gives music an equal power with the words and that once you’ve heard the lyrics with it, you can’t get rid of it.

This has even been enforced by song writers themselves. “Wordsmith” Ian Dury denied that his own lyrics were poetry. Wilko Johnson (who threatened to kill himself if he wasn’t a famous poet by 25 but thankfully got his Telecaster from under the bed, formed Dr Feelgood and went on to write some of the best Rock’n’Roll songs this side of Chuck Berry) has dismissed his lyrics as “doggerel”.

So what do you get for your money?You get a beautifully designed (by Andy Vella – who’s done a lot of stuff for The Cure) pocket book of 50 of TV’s best (his choice) songs.
What do I love about this book? There’s a great foreword by Henry Rollins. Every song is presented in a different font/type-face to draw the eye to the lyrics themselves. THE LYRICS THEMSELVES.

But you ask, does it do the business as a “poetry” book? I’ll admit that reading it, I’m tempted every now and then to “sing-a-longa TV” but as TV himself says “Released from the chains of verse-chorus-bridge the words run free across the page, unexpected nuance and meaning exposed, shouting loud and proud their new purpose – no longer are we song, now we are poetry” and guess what, he’s damn right!!

All words by Alan Grundy, find his Louder Than War reviews here.