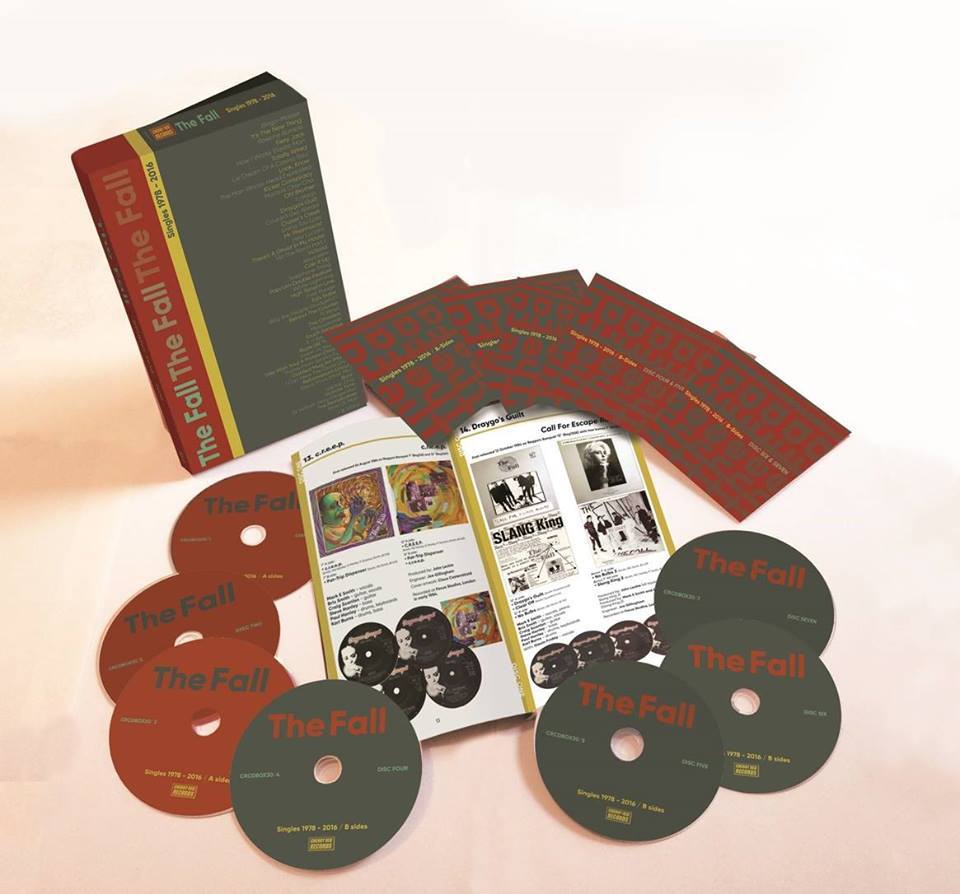 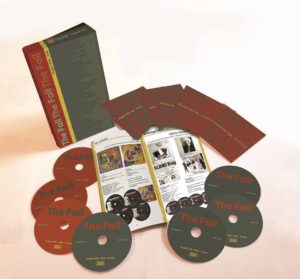 Other bands come and go.  The Fall are always there.  They always have been.

A new Cherry Red Records release documents their existence to date by collecting together every single and B-side they’ve released so far. It weighs in at seven CDs and 116 tracks. That’s 38 years’ worth of singles with contributions from God knows how many band members. There’s also a slimmed down, three CD version featuring just the 51 A-sides.

There have been plenty of Fall retrospectives before, of course.  The Complete Peel Sessions 1978 – 2004 is as close as these have ever come to being essential, with 50,000 Fall Fans Can’t Be Wrong, a 2004 ‘best of’ compilation chosen by music journalist Daryl Easlea also well-received by fans. Most of the rest are pointless cash-ins focusing on brief periods in the band’s discography. The Fall Box Set – 1976-2007 was the last attempt at a comprehensive representation of the band. Designed as a companion piece to Peel Sessions, it’s a good summary, but it’s ten years old and as a subjective collection it’s bound to exclude tracks that some people would deem essential. That’s one of the reasons The Singles 1978-2016 works – it’s dispassionate. Nobody’s saying these are the best Fall tracks.  They’re just the singles.  And The Fall have always released strong singles. As a way of representing The Fall’s output, it’s highly successful.

There is one flaw inherent in this way of showcasing their output. It means that classic tracks from classic albums are going to be excluded. Consequently, there’s nothing here from Live at the Witch Trials, nothing from Hex Enduction Hour, or Perverted by Language or Grotesque. But really, that’s nit-picking, because when you’re dealing with a discography as extensive as this, you have to draw the line somewhere. Besides, fans will have their favourite albums already, while newcomers can use this collection to decide where to start delving deeper.

It starts with the jaunty punk ballad, Bingo-Master and its B-sides, Psycho Mafia and Repetition, recorded in 1977 but not released until 1978 on Step Forward Records, swiftly followed by It’s The New Thing single. 1979 saw the release of The Fall’s first two albums, and between them, Rowche Rumble, the dizzying, claustrophobic commentary on the hypocrisy of the pharmaceutical industry.

Having established a prodigious work rate in the ‘70s, the band maintained it into the next decade and the ‘80s saw them really starting to make their mark. After the brilliant Fiery Jack came four classic singles on Rough Trade – How I Wrote ‘Elastic Man’, Totally Wired, The Man Whose Head Expanded and Kicker Conspiracy (“Remember, you are abroad! Remember, the police are rough!”). In amongst these was a final Step Forward 7 inch, Look, Know, with its remarkable B-side, the unsettling ode to an amateur radio enthusiast, I’m Into C.B. (“My family’s a weird lot, My stepsister’s got a horrible growth”).

Aside from two releases with Kamera – Lie Dream Of A Casino Soul and Marquis Cha-Cha – The Fall spent the rest of the ‘80s with Beggars Banquet, during which time they gave us the likes of C.R.E.E.P., Couldn’t Get Ahead, Cruiser’s Creek and the enduring Mr Pharmacist. The pick of the B-sides from this period are baggy pop of Tuff Life Booogie (from the back of Victoria) and the experimental and atmospheric Haf Found Bormann (from the There’s A Ghost In My House 7 inch).

The Fall continued to evolve throughout the ‘90s, with electronica becoming more prevalent in their sound. The rate at which they released singles dropped slightly from the previous decade but the quality remained incredibly high. In fact, listening to their singles output chronologically, for the first time, it’s noticeable just how reliable the band has been on that front. Through innumerable different line-ups, through the many changes in style and through the alteration of Mark E’s delivery – the crisp punk poetry of the late-seventies and early-eighties; the authoritative drawl of the late-eighties and nineties; the wizened growl of his more recent work – the songs are consistently great.

To illustrate this point, their ‘90s output includes Free Range (“This is the spring without end, This is the summer of malcontent, This is the winter of your mind”) – backed with Everything Hurtz –  Touch Sensitive, The Chiselers and the beautiful Masquerade. There’s also the memorable collaboration with house duo Coldcut, Telephone Thing. They ended the decade in style with a raucous cover of the Tommy Blake rockabilly classic F-‘Oldin’ Money, which comes across as a middle-aged, northern English Summertime Blues for the turn of the century – “Well, I went to the social just to get a little pension, I was sorely in distress, I was needing some attention”.

The Fall’s first single of the new millennium came in August 2001.  Rude (All The Time) is a rarity for the band; an acoustic track.  It’s B-Side I Wake Up In The City, was louder, way more fun and more indicative of their output since then. Theme From Sparta FC and I Can Hear The Grass Grow veered closer to conventional rock than they ever had before, while Bury!, Reformation and Slippy Floor are also noisy but more challenging and better for it. There’s plenty of variety in The Fall’s latter output though; from the EDM ballad Susan vs Youth Club (“Susan had an accident, Reverted back to age sixteen”), and the weird, world-weary folk of Distilled Mug Art, through the magnificent, techno-punk/woodwind Christmas carol (We Wish You) A Protein Christmas, to the precision noise of their most recent single Wise Ol’ Man, they’re as unpredictable as always.

In the sleeve notes for 50,000 Fall Fans…, Daryl Easlea used a quote from Mark E Smith: “If there’s one thing I can’t stomach, it’s all that retrospective shite. That’s something that I have never been into and never will. It represents a trainspotter mentality, little men collecting things. I don’t like that at all.” Hmm! If Easlea felt that comment was worth acknowledging for his ‘best of’ collection it’s probably even more apt for The Singles 1978-2016; this being a complete set that’ll fill in blanks for a lot of ‘little men’, or just another Fall release they’ll feel compelled to own.

Maybe that’s why Smith has remained so prolific for so long? If, for him, the past is the past and it’s done with and doesn’t need to be revisited, then perhaps they why he’s compelled to constantly create something new? Always moving forward, never looking back.  It’s certain that he’s never rested on his laurels. And this constant supply of new material – fluctuating in style and delivery, but always maintaining a high standard and always worth listening to – is part of what makes them unique and what keeps us interested. Other bands have come and gone. The Fall have had consistent cult appeal for 40 years, and counting.

Nick writes about indie, grunge, hip hop, punk, funk, psychedelia in various places including Sabotage Times, 50thirdand3rd.com and his own blog noisecrumbs.com. You can and should follow him on Twitter @NoiseCrumbs.