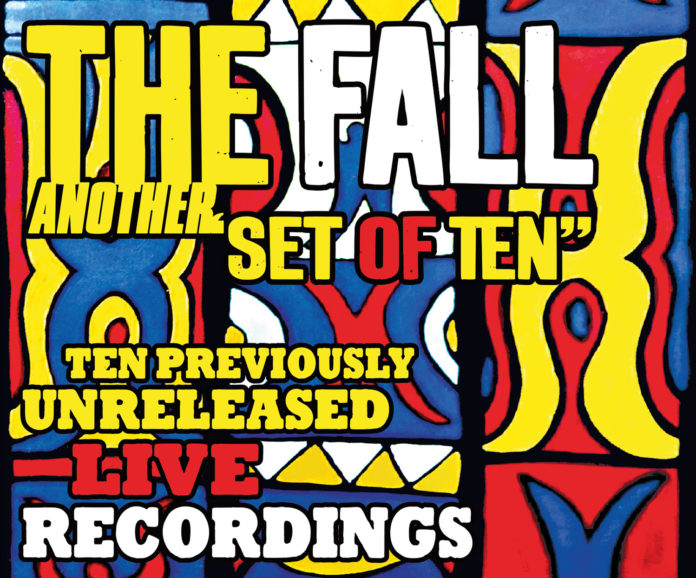 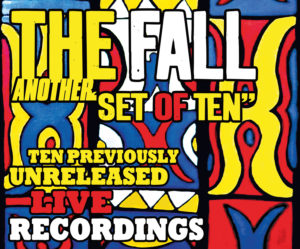 Another Set Of Ten.

The Fall have been reviewed that many times it’s hard to write about them but I’ll give it a go! Everything has been said and every fucker has documented their every move. 31 studio albums, 48 live albums, 48 compilation albums and 5 part studio part live albums. Take note Def Robot. You’ve got your work cut out. Up until the great marmite man died we were all waiting for his next move. New Facts Emerge was just pure brilliance yet again, fractured but full of genius. Probably the best line up since the Martin Bramah days, or the classic Hanley brothers and Brix era.

The packaging is great, each CD daubed with bizarre artwork and a nice certificate numbered to make it a lovely collectors item for dedicated Fall fans.

This box set documents the leap from 1984 to the captivating, sometimes shit gigs that captured the essence of the works of an amazing pissed up brain. It would be impossible to review every CD as an entity so I’ll run through each one with a few words.

Picture this. The Fall – November 2011 at Manchester Royal Exchange. I’ve seen them a lot but this was one of their best gigs for me. Tight as fuck even when Mark was fucking about with the equipment throughout, a trademark Smith trait. I’d have twatted the bastard yet the band remained calm and let him get on with his drunken nonsense and it was sound as fuck. Trainspotting fact: Craig Gill (RIP) from Inspiral Carpets poured a pint over his head when he appeared on Top Of The Pops.

Live At ICC Hannover 1984 is probably the worst one of this bunch and that’s why I can’t give a 5 bomb score as the sound quality isn’t that clever. Yet the crowd are loving it, especially with moments like Kicker Conspiracy, Marks yelping and (I imagine) scowling and prowling the stage. C.R.E.E.P sounds excellent under the murk of early eighties mixing desks and you can hear the band shining through the sound engineers swamped efforts.

Live At Tramps New York is bizarrely marked as being in 1984. Was this the plan to fuck up Fall trainspotters? I mean, check the tracks, Free Range, Lost In Music, Glam Racket. Unless they had a time machine. This is definitely 1994 or shoot me. A cracking set which gets the New York crowd in an exciting frenzy.

Warp forwards two years to 1996 at a packed out venue (well it sounds like it) and you can hear a few fuck offs going around as you’d expect from a boisterous Motherwell crowd. Lots of quality on here including The Mixer, Cheetham Hill, The Chiselers and a great outro of Big New Prinz. Prime live Fall.

The Edinburgh Liquid Room gig from 2001 sounds really intimate. Kicking off with a brilliant take on Touch Sensitive, a shitting kicking I Am Damo Suzuki is sublime. And Therein is in proper Smith form. F – ‘oldin’ Money is excellent yet the boo boys are out for Dr Buck’s letter, a few fuck offs here and there, to which they respond to a brutal Ibis Afro Man. One to remember.

For some reason the box set skips eight years to 2009 at Moho Manchester which suggests what? You tell me. There’s some classics on here; Cowboy George, Hot Cake, the wonderful Bury and a great bit where Blue Moon is aired to a mixture of boos and applause. Well it is Manchester divided for fucks sake and every knows Mark was a big Blue. A great set ending with live favourite White Lightning and Reformation.

Another jump to 2011 at Newcastle Riverside. Now this is where it gets interesting. The last box set was rumoured to list songs that weren’t actually aired. I find this out when Latch Key Kid turns out to be a version of Bury. The sound quality on this CD has a lot to be desired yet it’s still a class live Fall set. Nate Will Not Return is great as is Psykick Dancehall and Laptop Dog.

A stand out set comes from the Brudenel Social Club in Leeds 2012. Mark is on top form, going through an excellent Irish, Hot Cake and Gray. Cowboy George is aired “George, I hate your fucking guts” spilling out to the audience and it just gets better. There’s a party going on in here. Cosmos 7 is ace, the audience sing along to Container Driver and Blindness sound insane, Mark growling like fuck to that famous bassline. Amazing. A set closer of Theme From Sparta Fc is pure Fall shownmanship.

It dips again with bonus CD Live @ Pavilion Bar Cork. The band are tight as fuck yet Mark’s vocals are muffled throughout. Highlight of this is when he sounds like Chewbacca at the start of Taking Off. A comedy moment. Plenty of mad barking and howling and a mad version of Nate to boot!

The stakes are up at the Soy Festival in Nantes. A quality set from the band. Hot Cake and Strychnine sound top as fuck. They air Sir William Wray with Mark spouting his deh deh deh with total madness. Bury sounds immense and Blindness is just pure classic Fall. A smash one two of pure punk with What About Us and Over! Over! is fuckin ace!

We then head back over The Channel to The Button Factory Dublin. A headfucker of Hungry Freaks, the glam rock of Kinder Of Spine, an ace No Respects, the bonkers Hittite Man, a brilliant Happy Song with Elena taking on lead vocals so Mark can probably top up on the booze. The backbone of Greenway, Barbato and Melling showing The Fall had a strong setup up until the demise of Smith. Encore Over The Hill just fucks up the baying audience. Smith on form again.

It all ends strong with a great set at Cathedral Quarter Arts Festival in Belfast. Jesus. The set list is so strong, the sound is probably the best out of all of this collection. Strychnine, Hot Cake, Bury, Theme From Sparta FC, Weather Report, Mr Pharmacist, Blindness and The obligatory White Lightning. The Fall at their 3rd peak if that means anything?

A nice collection of live sets that should keep you occupied for a while during lockdown. There’s a lot of shit to get through, don’t get me wrong, yet anyone who’s seen The Fall will be reminded of how good they actually were when they weren’t having a bad day. It makes me laugh when you can hear him fucking with the sound and going fucking mental on Blindness. A flawed genius who is missed by many.