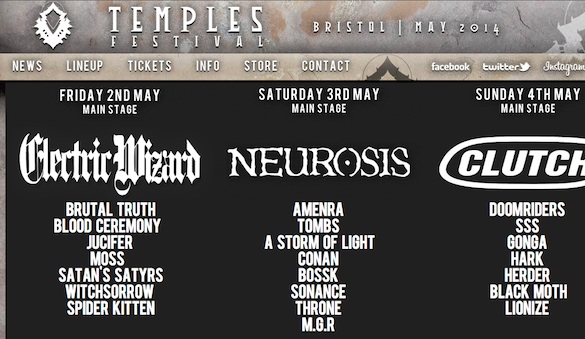 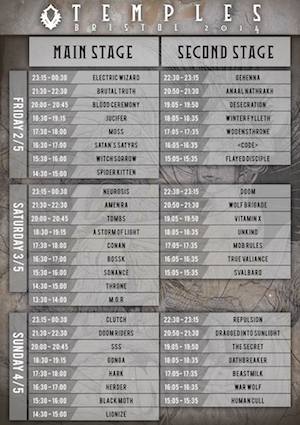 Day Three. The final stretch. The sun’s still shining and there are many more bands to see, lots of whom I’ve been wanting to see for a long time. So lets get on with it eh?

So, day three. Annoyingly I woke aching all over. And a tad shell-shocked. So apologies to Lionize, Black Moth and Human Cull all of whose sets I missed. I’m especially sad I missed Human Cull – was a time when I’d see them playing Bristol regularly, but it’s been a while and at least one excellent album (Stillborn Nation) since I last saw them. Do yourselves a favour though, if you dig the mighty grind and crust sounds of bands like Napalm Death, Doom, Fear of God, Discharge & Terrorizer get hold of that album. You won’t be disappointed. Oh, and Leeds band Black Moth put out a cracking album, The Killing Jar, last year. One for fans of heavy riffs, dark noise and “to die for” hooks. (Damn, as if this review aint long enough at over 5000 words already I’m now talking about bands I didn’t see!)

So let’s change that…

War Wolf. Do I need to say more? You know we like War Wolf here at Louder Than War. As per usual they brought their healthy mix of politics and really fucking heavy riffs to the show. “We’ve got another fucking conservative government – how the fuck did that happen?” And BOOM! straight into some incredible brawny music. “And this one’s about another of society’s problems – families” came next, a statement that was greeted with a cry of “Fuck families!” from the audience, one which, for my money, won the “heckle of the festival” award. A set to punch floors too, War Wolf, as usual, delivered. In spades. Explore this band’s back catalogue or consider yourselves to have missed out.

We rattle on with Herder. Another band from the Netherlands, Herder proudly describe their sound as “fucked up stoner doom sludge”. Proudly, we found out at Temples, accurately. They’ve been on tour recently with Doomriders and Beastmilk, also on today’s bill, and a mighty fine tour that must’ve been. Another band whose music could soundtrack Armageddon, Herder’s sharply contrasting tempos and abrasive whole made for a serious wake up call. Not that any of us had been sleeping but, y’know, Sunday afternoon and all that. No one would have blamed us if we’d been finding this sort of bludgeoning by music a bit boring by now, but in actuality, nuffink doing – another credit to the programming for keeping things mixed up as well as they had done. 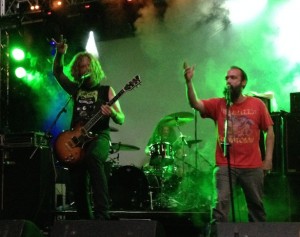 Next band I caught were Welsh progressive-power-sludge trio HARK, back on the main stage. Not the only band of the day to get us thinking of Black Sabbath, HARK fuse the best elements of metal and punk, a fusion which results in the production of a mighty riff machine, one with enough originality to be fun. Perhaps the fact that I’m describing HARK as “fun” tells you more you need to know about this weekend than anything. As fans of the band’ll know, HARK recently dropped a brilliant album, Crystalline. The closing track of Crystalline, ‘Clear Light of…’, featured none other than Neil Fallon, him from tonight’s headliners, Clutch, on vocals. So when they announced that they were going to be joined by a surprise guest for their last track we knew what to expect. Queue a stampede of photographers back to the pit (OK, two of them … plus that guy with the iPhone who make me wish I had the brass to make use of the photo pass I’d been given and to head in their with my smart phone.) As expected, Fallon brought a solid rock edge to proceedings, closing HARK’s set in style.

At which point my phone rings and I went off to have a beer with someone I’d been trying to hook up with all weekend. Andy by so doing I missed Oathbreaker, one of the bands I’d been most looking forward to all weekend. There’s not much comes ahead of me going to watch Oathbreaker, but this did. So lets refer to twitter to get an idea of how good their set was: 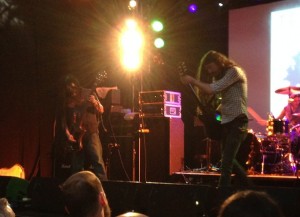 Returning I catch the tail end of Bristol’s Gonga who, as ever, totally nail it. They also nailed “hair of the weekend”. One of the few instrumental bands playing the festival this weekend (former vocalist Joe Volk having left the band) they were tearing along like a huge great lumbering beast when I caught up with them, well into their stride, playing some of the fiercest riffery we saw all weekend – and in a weekend chock full of fierce riffery that’s really saying something. The shuddering bass is especially impressive, and the whole a tangle of heaviness. Having also seen their full set live earlier this year I know they aren’t averse to bringing more subdued stuff to the stage too and I’m sure the start of their set will have included some of that. 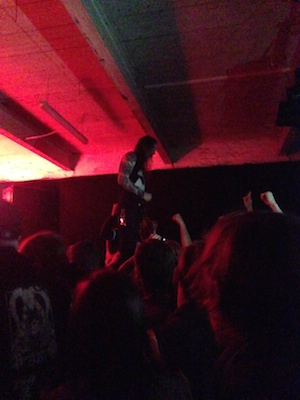 The smoke machine was working overtime on the second stage now, and a thick fog was engulfing our next band, The Secret (see photo right), who were playing their skins off to a huge, expectant and very excited audience. Their brand of hardcore meets black metal was properly chilling and had it been taken out of context of this whole weekend I imagine I’d have been knocked sideways by them. As it was they just became another band added to my very long “must research these guys back catalogue” list. What they treated us the audience too was none other than all out cacophonous assault, barbaric in its intensity and full of bile, vim, guts and blazing fury. The singer crossed the Rubicon (ie photo pit) at one point (one of the very few to do so) and stood on top of the crash barrier with many pairs of hands holding his ankles making sure he was steady, with the bouncers looking on with anger in their eyes. Set over, it was time to quickly catch our collective breaths again before the next band! Or, in my case, a quick cycle to the nearest cash point so I could acquire more merch. (On getting back I immediately found out they were doing cash back at the bar. Gahh!)

Gutted that I missed the start of SSS’s set I made the most of the last 15 minutes of their set, one which was accompanied by the only, proper, full on, fuelled by testosterone, stage one mosh pit of the weekend. SSS brought two things not so much in evidence over the weekend – hardcore influenced thrash and humour! What I saw of them was brilliant – definitely music to mosh to AND have fun to, their sound was defiantly short, sharp and shocking. Possibly the fastest band of the weekend too. A new album by these guys soon would be a good thing. Naturally they finished the weekend by urging us to go see fellow Liverpudlians Dragged Into Sunlight. Which was one hell of a good call, but also, as I was already on my way there, applauding as I walked, an unnecessary one too. 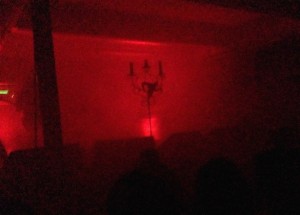 Prior to the start of the festival Dragged Into Sunlight (see photo right – I promise you they’re in there somewhere) were officially top of my “Sundays must see bands” and were in my top 5 festival wide “bands I must see” list. I’ve had so many people tell me to go and check them out live that I was totally anticipating an anticlimax. So not the case. Absolutely shrouded in dry ice, so much so that we barely got a glimpse of them throughout their whole set (except when their strobe was at its most uncomfortable and the fog at its least obscuring.) DIS are extreme. Extreme black metal. The band’s sound has been described as ‘a blistering void of total negativity’, which comes about as close to describing them as one can get, but essentially attempting to do so is a futile exercise. But I guess I ought to try. Erupting out of an unrelenting blackness, if Dragged into Sunlight’s thunderous, roaring storm doesn’t have your heart in mouth and doesn’t send you a bit back inside yourself there’s something a bit weird about you. It’s boiling, visceral intensity is only matched by the lightning bright strobes which joined in the action soon after their set started. Guttural vocals came out of the swirling mist of dry ice, cutting through the room like the hot knife through butter they talk about. It’s paralysing, all you can do is stand, watching, wondering why you can taste your stomach in your mouth. They’ve pushed the boundaries of what extreme metal is and have done it with aplomb. They finish and you suddenly realise that, fuck, you’re not alone in the world after all. Nothing can follow Dragged Into Sunlight. You can’t go back and watch more music after this band. So i went outside for a bit before, pretty much forlornly, returning to the fray, more out of a sense of duty than anything.

Eventually I thought I’d recovered enough and went back to the main stage for the tail end of Doom Riders. They’re not Dragged Into Sunlight though so I didn’t last long. @Miles_Volta on twitter liked them though: “#doomriders were fucking exceptional at #templesfestival” I sat out Repulsion too. So did everyone else it seemed as there was nothing on twitter Sorry guys. Then I went and worried my way up front for Clutch who start with the words “let’s have a rock ’n’ roll party”. My heart sank. I stayed for the whole of one song. Everyone deserves at least two songs. The second one started. The last thing I wanted to end the festival with was a rock ’n’ roll party I’m afraid so I fought my way out just as a bit of a mosh pit was starting. Picking up some Dragged Into Sunlight merch on the way out I told the guy on the desk “the world seems a bit lame after DIS”. That totally included Clutch I’m afraid. I’m far too deep into blackened thoughts for a rock ’n’ roll party. I went home. But thousands stayed and I’m sure they all had a blast. They certainly were doing when I left and I’m sure, as Peel used to say, not being able to get into Clutch represented a fault in my listening not their playing!

Band of the day? Dragged Into Sunlight.

But we’re not going to end on a negative note are we? Course not – massive props to Francis Mace and his fellow organisers for putting on what was an incredible and near as dammit flawless festival run on a potentially game changing blueprint for what festivals can be. We’re told 2015 is going to be even better. We can’t wait. Oh, and a word of advice – if you’re going to want to come in 2015 you had seriously better book tickets early. Because plain and simple – word of mouth’s going to sell that bugger out pretty damn quick.