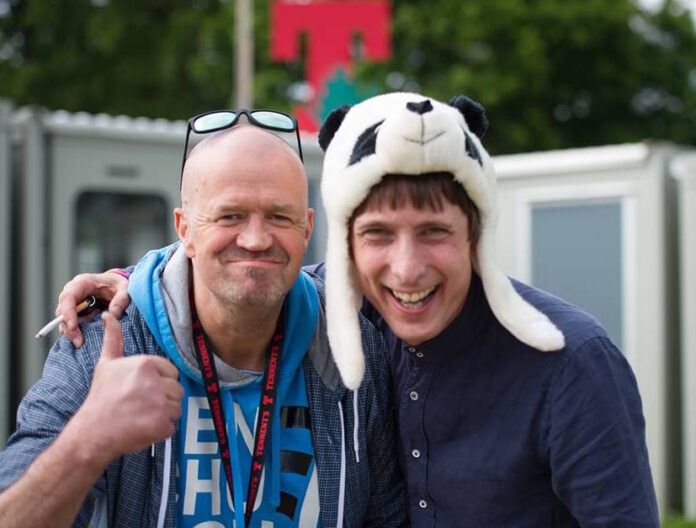 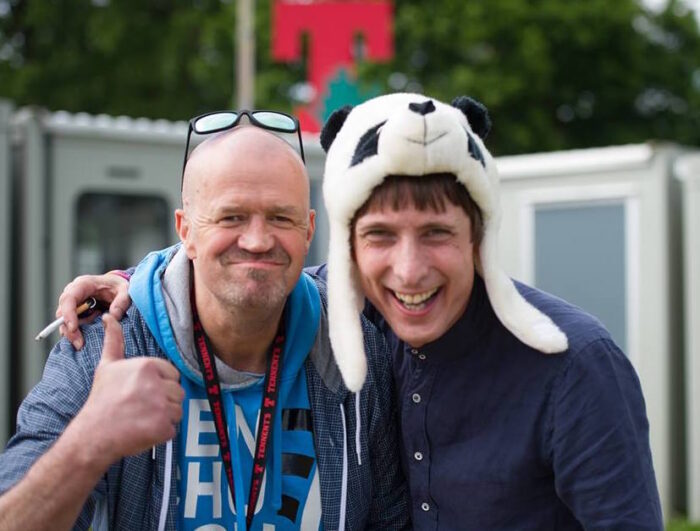 Harry Mulligan caught up with Scottish acoustic and blues artist Gerry Cinnamon while at T in the Park recently.

Gerry Cinnamon is a man with a Plan who has the uncanny ability to rouse his Grassroots Scottish fan base to frenzied proportions. I went to see him support John Powers from Cast at Cabaret Voltaire in Edinburgh recently, cozying up besides some bit of ‘hows yer father’ for what was thought was going to be a relatively quiet night listening to John’s folky stuff about the Sea and Mariners and that. Well, when Gerry came on and this erstwhile author had lost his bunnet in the first in the first five minutes, one rapidly thought: ‘For fecks sake, and moved ones wallet from back to my front pocket, tightened ones belt a notch in the squeeze, and tossed ones mineral water and blackcurrant back like Lee Marvin in Paint your Wagon!

Similarly, at this year’s T in The Park he hit the T Break stage in the mid-afternoon to an enormously loud, robust and vociferous crowd chanting his name. Buckling under the weight of such heady adulation and love, and like a visionary in ecstasy he dropped spontaneously to his knees and gestured his lack of worth to the present throng. As my wee maw used to say: ‘You’re never as powerful as when you’re on your knees.

An encounter was had for the first time in the Media Village, armed with the knowledge that we are from the same tribe, and this is what was said:

Gerry Cinnamon: I’m no’ bad my man, absolutely buzzing after that gig! I’m starting to come down to be honest, it was absolute mayhem.

HM: It was a pretty packed tent, how was it for you?

GC: You never want to have too high expectations, but when I went out, there was this Gerry Cinnamon chant for about twenty minutes. That was before I came on and stuff. I was absolutely buzzing. From start to finish, the place was absolutely Rocking! I was crying at the end and everything.

HM: So a good hometown support from Glasgow?

GC: Aye, from all over. A lot of people just came in because of the online thing. Absolute mayhem, but I loved it, best gig I have ever played, by far! It was carnage.

HM: We caught you a couple of weeks ago with John Powers, what’s happening for you at the moment?

HM: Where are you going to do the tracking?

GC: I’m going to do it myself, build a wee studio, DIY all the way!

GC: More carnage! I’m scared to be honest, I don’t know how far it can go! I’m not interested in… a lot of people want to take it to: ‘If I get to this point!’ If we play bigger places, great…!’ I always think that’s a by product of playing good gigs. If people dig the album and I play good gigs, 110%, I think people will respond to that and the by product will be success, but I don’t even care. One gig at a time, smash it every time, see what happens. Try and survive it ha ha!

HM: Any inclination to put a rhythm section behind yourself, or a band?

GC: No! I’ve got the loop pedal! I make enough noise as it is! It means I’ve only got to worry about one idiot in the band. I mean, I’d love a lead guitarist and that, but I don’t know if the could handle me.

HM: Is there anything else you want to put out there?

GC: The album is out in October if you want to get involved get involved. If you want to come to any of the gigs, come to the gigs. i give it my all, a bit of honest music, my passion. Aye, I just want make a bit of noise and show upcoming artists what I can do. I don’t want to get too romantic about it, but the music industry is on a kind of precipice. I think everybody has been waiting too long for the next big thing. You had like Punk in the late seventies and the New Romantics, then in the Nineties you had Britpop, and in the Noughties, 2000’s the Digital Age, whatever, we’re kind of in a crisis about where we’re going to go with music. There’s not a lot of money in the music industry anymore and everybody is waiting on like Alan McGee to throw money at people, and its just not happening. Or they’re waiting on somebody else to do the work, when they should be doing it themselves. Its the old paradigm, remember when people used to go on about the Label’s and stuff, and how they control stuff, but now there’s no money, you have to do it yourself. Instead of moaning about it, do it yourself, build your own Bonfire. Rather than rely on someone else. The power is in their hands. I think we’re at a turning point where its either going to implode or something is going to rise from the ashes. People should just be honest instead of trying to market themselves constantly. Its a load of nonsense, and its become a little classist as well, with sort of rich bands and no one really has a voice from the Working Classes. It doesn’t really work, nobody is really being honest. That’s what I’m trying to do is just be as honest as I can, say what I think and don’t really care whether I get anywhere with it. It’s not a lack of ambition, a lack of concern, or what the Industry think because its all nonsense anyway. Its that honesty, and people have responded to it, that’s why I think I’ve had the success that I’ve had. I’m saying how I feel, I’m saying what I think and trying not to be a Dick about it.

HM: So how much do you alchemize your experiences from the streets of Glasgow into your music?

GC: Its not a contrived thing, I don’t think I try to do it in that way. I always think I try to be honest. I used to be in a band, and we used to be on the Circuit, and I got totally disillusioned. The kind of Serial nepotism that’s involved and the way it works and the Pay-To-Play Circuit. I just wasn’t interested and I made a decision to do it myself, record my own music online, selling out Venues myself. I sold out Tut’s three times, and that’s not even with a record out. the thing kind of exploded and now its all happening. I don’t know man, its not a contrived thing, and people respond to that. I’m trying to do what I’d want in an Artist. It’s all subjective, and that’s what everyone wants is for someone to go: ‘It’s all Bullshit!’ Know what I mean? Enjoy yourself, be honest about things, right from the heart, write from the heart! Do what you do. I wouldn’t be in the position I’m in without the fans, buying my music, its about them. It’s a pressure, but I’m just riding it man. I’ve got a lot of people Hopes and Dreams, a weight behind me. I’ve got nobody, in the Industry that is. I’m kind of doing it from Grassroots and hopefully that carries on.

HM: So where’s it going?

GC: I dont want to be too romantic about it like I said. The music industry is on its arse. Everybody is kind of waiting on the likes of Alan McGee and stuff. Alan is kind of in a position where everybody is kind of looking … I mean look Avicci are headlining! There’s no big bands coming through and everyone backstage is moaning about Avicci headlining here at T in The Park. Biffy were kind of one of the last Rock bands and Kings of Leon are doing adverts and stuff now. What else are you going to do? Until the people who actually care about music take control. People think because you’ve got this weird paradigm with no money and stuff, and its a different position Alan is in, Alan McGee wher he sort of become a victim of his own success. He’s now part of that Aristocracy – not the aristocracy, but he’s become part of the thing that he fought against with the Punk ethic. He’s doing more than any of them, he actually gives a Shit. We’re in this cultural paradigm where everything is changing, or not even changing but staying the same, waiting for the Next Big Thing rather than doing it themselves. I think something has to hapen, something has to give, to implode for it to start again. If anybody is listening to this, upcoming artists, its upto you, because nobody else is going to change it. So do it yourself, build your own Bonfire, do your own thing. Ha ha ha ha …

HM: Gerry, thanks very much for talking to LTW, and all the Best for the rest of 2015!