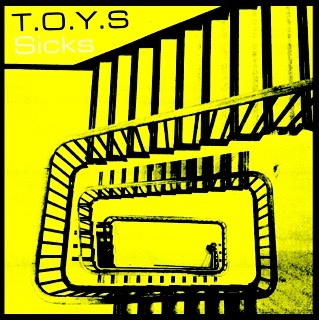 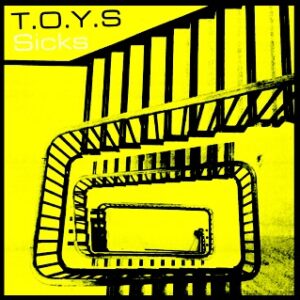 There is, appropriately, something very playful about T.O.Y.S. Remember when you’d mix and match Action Men, Lego bricks and water pistols with bits of Buckaroo or Mousetrap to create an imaginary playscape even more fun than the sum of its parts? That seems to be the spirit in which this Leeds/London trio approached the seven days they spent recording SICKS, their first full length album. The toys in this case are Adam Miller’s bass, Eddy Lines’s drum kit and, perhaps most essentially, the keyboards that David Kitchen gives a damn good workout when he’s not busy delivering the vocals. And sometimes when he is, come to that.

Adam and Eddy provide a rock-solid back line that’s as raw yet reliable as anything in Joy Division‘s less-heralded pre-Hannett phase. Over and around this, David rolls out a feast of colourful keys that slalom between the 60s garage Farfisa sound beloved of everyone from the Mysterians to the Inspirals, and cleaner, more elegant splashes of synth that nudge T.O.Y.S. closer to the realm of a DIY New Order.

Opener Liquorice perfectly straddles this divide between the bright’n’breezy and the snotty’n’sleazy. Lyrically and musically it’s an irresistible invitation to get together and enjoy some chewy black confectionery – or possibly something stronger, who knows? The relentless party vibe makes it one of the album’s indie-disco anthems in waiting, so don’t be surprised to hear it next time you’re out on the floor. Assuming you’re in a half-decent club of course.

T.O.Y.S. follow up that impressive opening volley with another standout track, Wall. This one is defined by a taut, metronomic backbeat of the kind famously pioneered by the great Klaus Dinger, washed with a stately synth progression that soars forever upwards. It’s a powerful piece and the introspective lyrics tumble out in a post-punk monotone that perfectly complements the brooding, Hooky-with-a-fuzzbox growl of Miller’s bass.

Lead single G-A-C is up next. Lord knows I’m no expert, but I seem to remember that G, A and C are all chords on a guitar, so maybe that’s where they got the title. It’s a punchy, energetic number with swirling garage keys and a great rattling drum sound. More cap-doffing to Miller, too, who puts in some impressive fretboard mileage.

We need to talk about track four, Soul Remains. Three-quarters of this is a truly brilliant song. It has dark, striking lyrics that unflinchingly recount a horribly violent, but all too familiar-sounding, incident and the very real physical traumas that ensue. It has a stirring, militaristic rumble of a drum track that calls to mind the much-loved Road to Nowhere. It also, however, in sections including the intro, features an impossibly irritating warble on the synth. At first I thought my batteries were running low, until I remembered iPods don’t work like that. And I’m aware that the appeal of the vintage keyboard sound is largely down to that clever oscillating speaker contraption. But this one sounds like it’s oscillated off its fucking hinges. The closest comparison I can think of is those queasy ‘who put the finger on the tape?’ bits of Loveless, although happily for Odd Box Records, this little indiscretion should prove to be several hundred thousand pounds less expensive than that. Seriously though, don’t let me put you off what is otherwise a cracking song, and a centre point of the album.

Funnily enough, the next track is actually called Centre Point. It’s something of a funky excursion that puts the rhythm section front and centre, before dancing itself into exhaustion and wisely deciding to take a seat for the following, more sedate The Sound Of – a mid-paced affair with an affecting, heartbroken vocal, that’s really rather lovely. It has got a bit more of that mad warble in the keyboard part though. Maybe it’s just me. Is it just me? I’m not going to let it spoil things anyway. Oh, and there’s a phone ringing at the end, which I always like. I’m convinced there’s a phone ringing at the end of Public Image too, although that probably is just me.

On the home straight now with the upbeat Lucid and its skittling drums, gloriously speaker-ripping bass and whirligig keys. Wrapping things up is Desire. This has all the substance and stamina of a classic album-closer. It’s another break-up/fall-out song, but this time the boot is very much on Kitchen’s foot and he’s not afraid to use it. ‘Looks like I won’t be your friend for life,’ he sneers, as Eddy wallops seven shades out of his kit and the keyboards describe a paradoxically sunny, Blondie-style refrain.

A hugely enjoyable album, then, that playfully flings some top pop material into an altogether grubbier, fuzzier garage context to see what happens. Fun and games all round, as it turns out, although the record will ultimately live or die based upon your tolerance for old-fashioned, organic keyboard sounds produced very much by humans. Me? I love ’em. Just as long as the warble’s kept in check.

Words by Glenn Airey. You can find more of Glenn’s writing for LTW here or follow him on Twitter @GlennAirey.