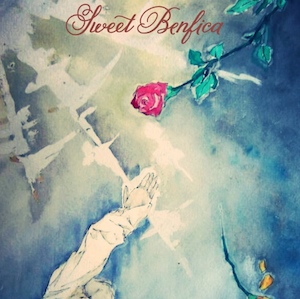 I had the most perfectly compelling introductory paragraph to this review, which I recited to a very attentive dog in my living room.  Then I went in search of my drink and when I returned, I had completely lost the thought and the dog had not been taking notes.

Then I listened to Earthquake Lights one more time.

Sweet Benfica, it seems, have been on a roll.  Within the last year they have released a single, an EP (click here to read an earlier review on LTW), and now an album.  Currently in the works is a 7-inch vinyl single via Oddbox Records.  Stefan and Calum James have been busy in their shed in Neath.  Actually, Stefan James has been writing music and playing in bands for 10-years, but it wasn’t until he partnered with his younger brother that things started to get a little…mental.  Earthquake Lights, and the rest of the Sweet Benfica catalogue show this progression quite nicely.

Earthquake Lights is the first full-length album from the brothers James, and it delightfully combines the alt-folk and garage punk elements hinted at in their previous releases.  This album also demonstrates a clear step forward in terms of their writing, composition, and recording.  The lyrics are absurdly funny, sentimental, and dead on serious.  This is classic garage punk, with two musicians writing about personal experiences (shaving, childhood memories, girls, horror movies, endless missed opportunities) and thrashing it out together.  This is music from real life- and the delivery is both heartfelt and authentic.

You cannot buy authentic.  I don’t care how much money you have.

From the opener, The Girl Makes Me Go Wild, the album careens from full-thrash headbangers, like the title track- Earthquake Lights, to dreamy and gauzy acoustic songs grafted with lo-fi electronica, like 100 Degrees and White Rarebit.  Stefan mashes pedals and tries to keep up with Calum’s restrained, but quite fast, beats on the quicker numbers, which is half the fun.  You see the wheels start to come off the cart, but you know they’re agile enough to pull it together. While the album has a very “live” sound, especially on the uptempo songs, the quieter moments of Earthquake Lights use well thought-out layers of sound, noise, feedback, and keyboards.  It is in the songs, like Cave Drawings, Weird Beard (see below), and White Rarebit where we see real development in Sweet Benfica’s compositions and engineering.  The songs were written for live performance as a two-piece, but have been augmented for the recorded album, and in a way that makes each of the 12 songs sparkle.

There are dark themes and very bright themes that track with each song on Earthquake Lights.  One of the best parts of the album is that you don’t know exactly where you’ll land when the song starts, but you quickly sort it out.  VHS is a very clever and nostalgic song about childhood memories excavated in a box of 1980s slasher movies tapes.  There is also a half-funny/half-creepy/mostly wonderful song about children and vampires (Villains).  Add a couple of scorching tunes (Back This Way and Earthquake Lights) and you have a diverse sonic portfolio from two very creative writers and performers.  Earthquake Lights will be a great summer album- it works in both the daylight and the dark.

The influences behind Sweet Benfica’s music are some times easy to identify, but other times less so easy to discern, because their sound is so varied.  My ear hears fragments  of the Ramones, Killing Joke, 1960s garage rock, the Velvet Underground, Bob Dylan, and early Wire.  That’s quite a combination!  You sort of have to hear it to believe it.  HORROR is a great example and one of my favorites from the album.

Lyrically the album is varied, rich, clever, and somber.  Songs of domestic life (Paper Thrones), are skilfully woven between headbangers like Back This Way, in which Calum literally stomps the shit out of his kit.  Songs about being pressured to change (Weird Beard) bounce off the slam-dance-jam of HORROR.

But the closer, White Rarebit, is one of the standouts of Earthquake Lights.  The album starts with the bang of The Girl Makes Me Wild, a song about youthful recklessness and wild abandon, and ends in the deep, dark, solitary night.  Stefan James plucks a simple, very traditional sounding tune on an acoustic guitar, reminiscing about dancing even later into the night in the darkness of a nightclub.  The chorus shifts from “we won’t come back, just for the hell of it,” to “we’ll go all night, just for the hell of it.” And while you are drawn into the mystery of the shifting lyrics, he slowly builds a sonic wall of backwards guitar, noise, and ambient drone sounds.  He’s wearing his Lou Reed sunglasses and both the lyrics and the music build in intensity so gracefully that you don’t notice it until the album has ended.  The album doesn’t really end, it sort of quietly unhinges.

Stefan and Calum James do it on their own, the songs on Earthquake Lights are their own stories, and they’re definitely NOT full-kit wankers.  All of their material is self-recorded in a shed and the sound is distinctly lo-fi.  But how Earthquake Lights was made, and how the recording sounds, seem completely irrelevant to the final product, a collection of innovative and quite listenable musical arrangements with lyrics drawn from their collective imagined pasts.  At the end of Weird Beard you can hear one of Stefan’s children in the background while Stefan is singing.  That’s one of the little things that makes Earthquake Lights a great album.  The sound would have been easy enough to edit out, or to re-record the track, but the squeaky kid was left in because it worked both sonically and thematically.  Beautifully raw.

Feedback, a stack of guitars, a voice, and a walloping drum kit are probably humming in a shed in Neath right about now.  These folks are just getting warmed up.

Over the summer Sweet Benfica will be playing a number of local shows close to home, but you can catch them in a rare appearance at The Shacklewell Arms (London) on June 28 and at the Rhonnda Rocks Festival (Wales) in early August.

You can learn more about Sweet Benfica, steam, and purchase Earthquake Lights here…and definitely follow them on Twitter