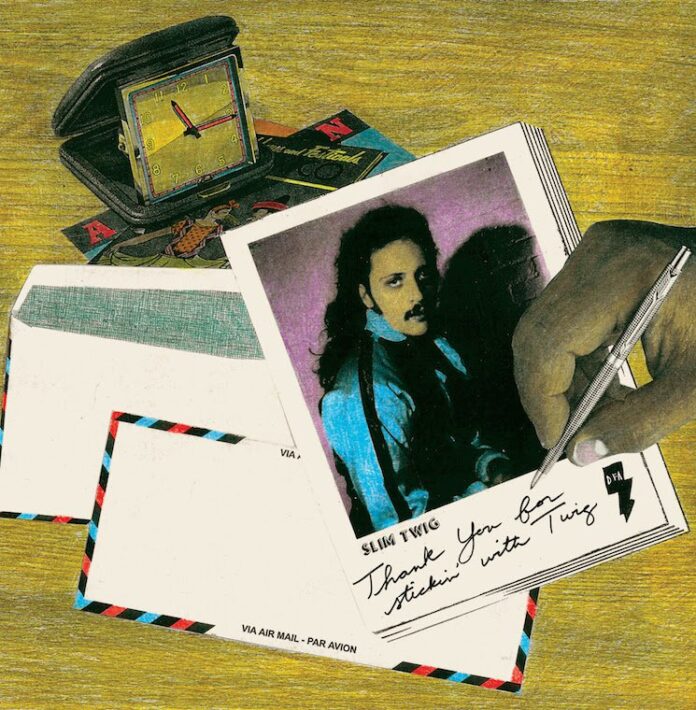 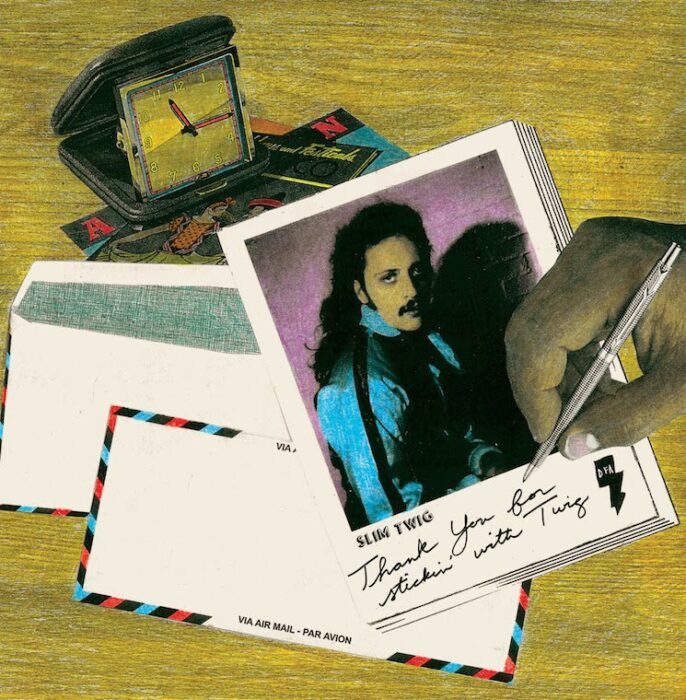 Slim Twig: Thank You For Stickin’ With Twig (DFA)

Back in the day when people still bought CDs, there would come a time when you would stumble across an album with a funky cover: its artist, unknown and elusive; its music, a mystery. You would take a gamble and buy the record. Once home, the feeling of reserved excitement would soon be replaced by confounding disappointment. “I did not expect the record to sound like that!” you would mutter unto yourself before mentally shelving the new purchase in the ‘too weird to hear’ pile. But before you know it, some indescribable force draws you back to the record again and again. Slowly, this album becomes a regular feature in your car stereo. The artwork, she gets smudged with sticky fingers. You go see the artist live and think about buying a t-shirt. Soon enough you find yourself wondering what it was that you found so objectionable about this music in the first place. I’ve discovered many of my favourite artists this way, I’m sure you have too.

Digital culture doesn’t easily allow for such an intimate relationship with music. The purchase of a physical artefact commits you to that object, whereas a download is invisible, even if it has a price tag attached. Needless to say, not many people hover too long over an album these days. The music of Slim Twig (aka Max Turnbull) is a symptom of its time. The aptly titled, Thank You for Sticking With Twig, is the young Canadian’s second album for DFA. It is overwrought with referential stabs in the dark: Queen’s Baroque tendencies; Sparks’s erratic meanderings; Zappa’s madness and Bowie’s coked-up snarl. My girlfriend calls this phenomenon Foxygen Syndrome, while journalist Simon Reynolds refers to it as hyper-stasis. A notable sickness indeed.

Slippin’ Slidin’ makes its intentions clear from the off. It’s a synth-stomping carouse begging to be synced up with some shots of a silver car sliding and slipping about in a salt desert somewhere. Textiles on Mainstreet is a smoke and mirrors reimagining of a Beatles song that somehow never made it to their repertoire. Fog of Sex (N.S.I.S) is slurry and suggestive of a good time, while Red Roll Red Roll (Song for Steubenville) is a haunting, cinematic ode to victims of sexual assault.

The record is also interspersed with little injections of bitesize sonic psychoses that aim to bridge longer tracks together. Many of Twig’s synth parts on these tracks recall Wendy Carlos‘s work on the Clockwork Orange Soundtrack, which served as thematic extensions of the protagonist’s psychological conditioning. Supporting vocals are provided by Meghan Remy, of U.S. Girls fame, and crop up throughout the album. Twig’s own modulated vocals are an attempt to “re-contextualize an era of ambition in produced rock music” and to destabilise the cliche.

It is undeniable that we are all still very much in love with the object. A recent study published by Ofcom stated that 34% of adults check their smartphone within the first five minutes of waking up. Yet it is not the content that we’re in love with, it’s the container. The music of Slim Twig, as erratic and flamboyant as it may at first appear, is a clear antithesis to this problematic love. Thank You for Sticking With Twig is a difficult album to like at first, because its hyperactivity doesn’t easily let the mind settle on something stable, but familiarity comes with time and is soon superseded by a loyal affection for the music. Slim Twig may or may not be a subversive agent, but his latest record is certainly worth spending some money on and playing repeatedly on your turntable until your needle can take no more.

Thank You for Sticking With Twig is out now, and you can get it here. You can also find Slim Twig on his Facebook and Twitter.

All words by Ilia Rogatchevski. More writing by Ilia can be found at his author’s archive.