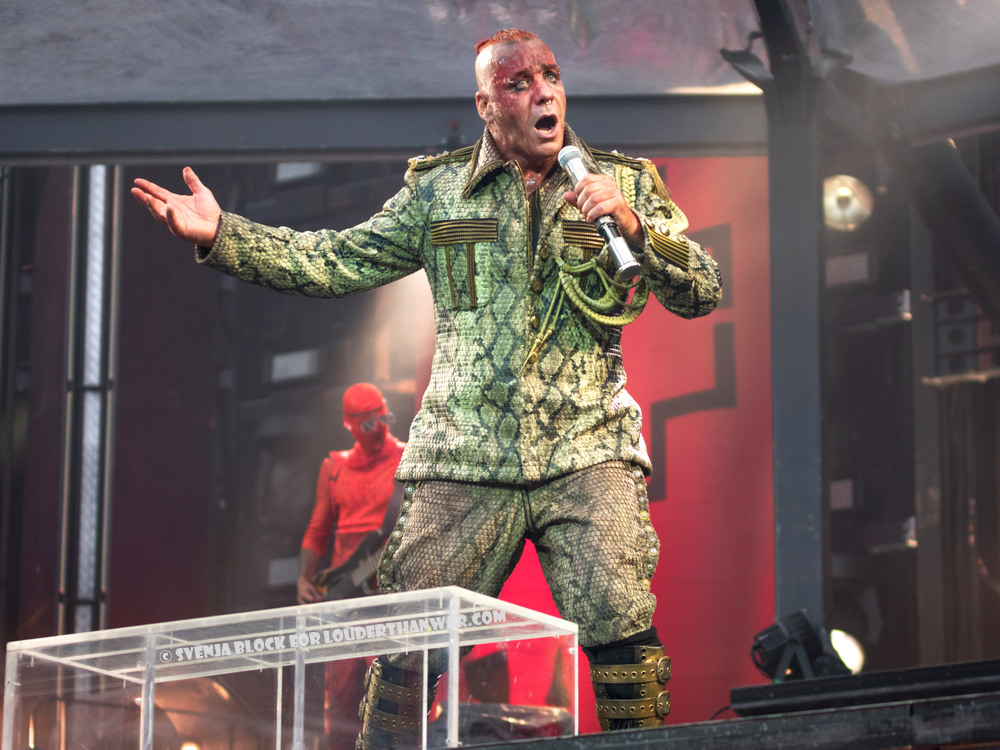 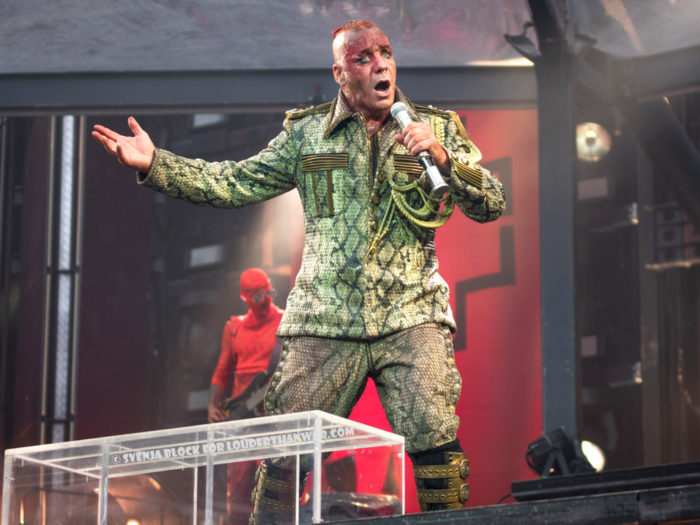 Rammstein didn’t perform a gig. They created an experience. And each offering from their 21-song set featured the type of pyrotechnics and fanfare that other stadium entities reserve for a special grand finale. Louder Than War’s Andy Duke and Louder Than War photographer Svenja Block made a pilgrimage to Milton Keynes to take in the noise. And the flames.

I will start at the end. An audience the size of Rutland’s population makes their way out of the venue. With their ears ringing and eyes recovering from the sudden and regular bursts of light and fire, most are nervously contemplating last train times from Milton Keynes. In tandem with the exodus, credits from the performance scroll across the large screen above the stage. Yes, credits. Non-standard but entirely fitting for a performance of this magnitude. After all, this gig ranks as one of the most memorable live spectacles I’ve had the pleasure of witnessing. And a lot of talented people helped to realise Rammstein’s vision. 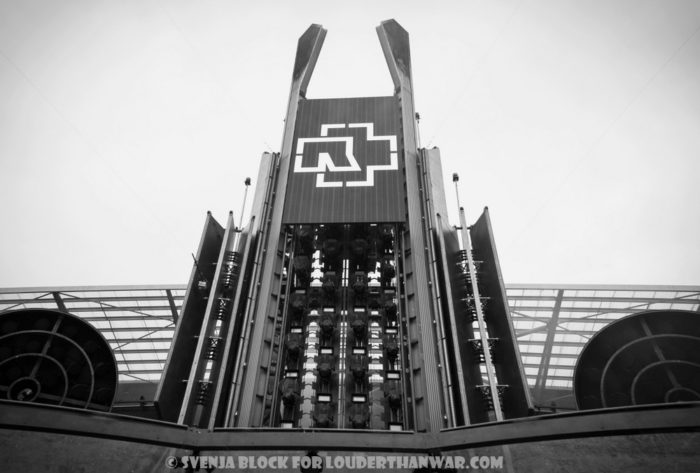 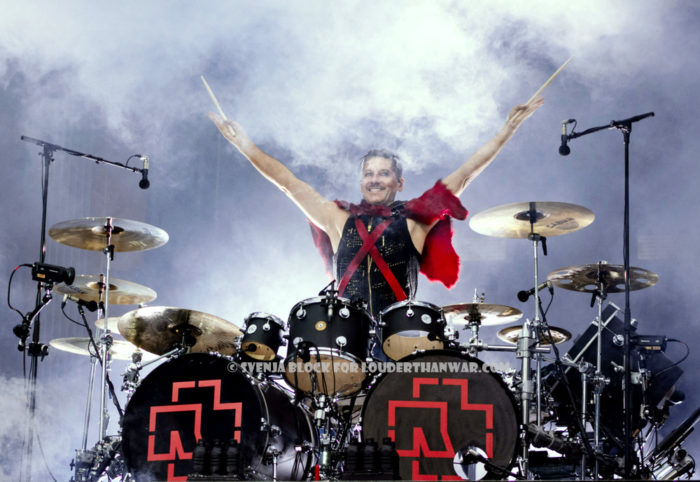 The painstaking attention to detail employed by the band and their crew achieves the impossible – an immersive live experience at a stadium. While it’s commonplace to have two separate PA rigs to cover both the front and back of the venue, Rammstein go a step further and use the rear of house rig as separate platforms to duplicate and enhance their onstage pyrotechnics. This enables folk at the very back of Milton Keynes Stadium to feel the heat from the flames as intensely as the crowd by the front of the stage do. My use of the word ‘feel’ should not be taken lightly. When flame blasts are incorporated to punctuate the arrangements onstage, I’m reminded of the sensation of opening an oven door mid-roast. It is that hot. In addition to this, I have never experienced such a dynamic and full sound at an outdoor venue. It’s one thing to hear a band perform, it’s another to feel it and be able to detect the subtleties of snare hits and the many effects employed by the two guitarists. Lastly, there’s the stage itself. Rather than being a foundation on which to perform, the entire installation is a crucial part of the festivities. From resembling a bunker under siege, with plumes of smoke seeping from every surface, or creating mood shifts with ever-changing lighting themes – Rammstein provides a feast for the eyes and ears for the duration. 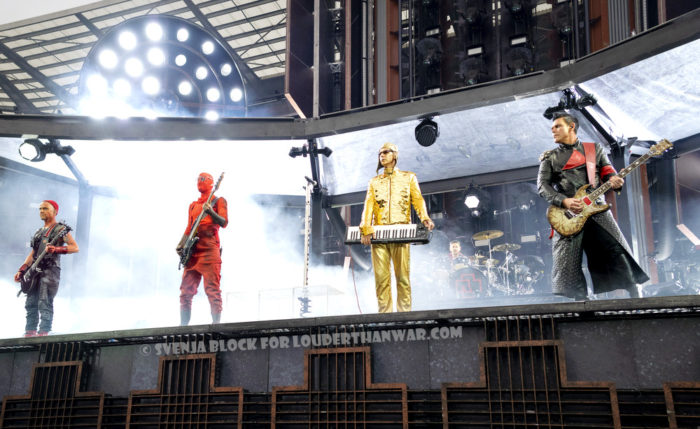 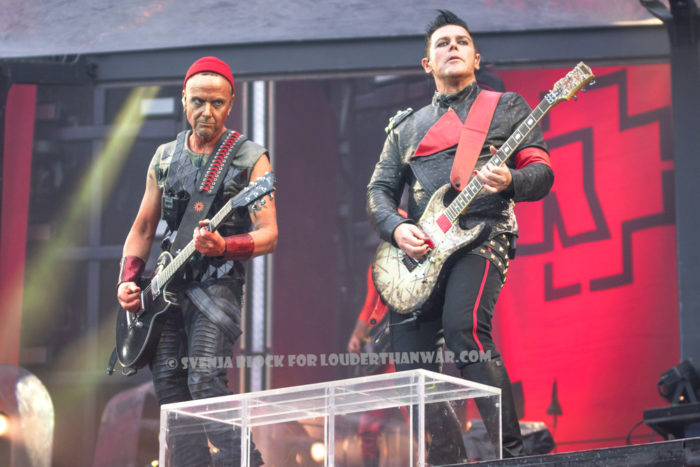 “I can’t speak German but I love singing along”, shouts a fan to her mate behind me just after the band dazzles the capacity audience with their epic opener Was Ich Liebe. This overheard comment reveals a very unique element in Rammstein’s appeal. As we Brits are notoriously resistant to venture away from our mother tongue in our musical tastes, non-English tracks tend to be one-off novelties in the lighter end of the genre spectrum. J’Taime or Joe Le Taxi are merely two examples and share a Franco allure that doesn’t exist in Rammstein’s canon. And, let’s face it, Heirate Mich isn’t going to win over the masses in the way La Bamba has in the English-speaking world. That said, it speaks volumes that Rammstein’s sole UK date this year sold out as speedily as it did. Moreover, it’s a tribute to a German band who have succeeded in winning over fans on their own terms. Ultimately, the band’s music is bigger than the language they use and the success of this evening is living proof. 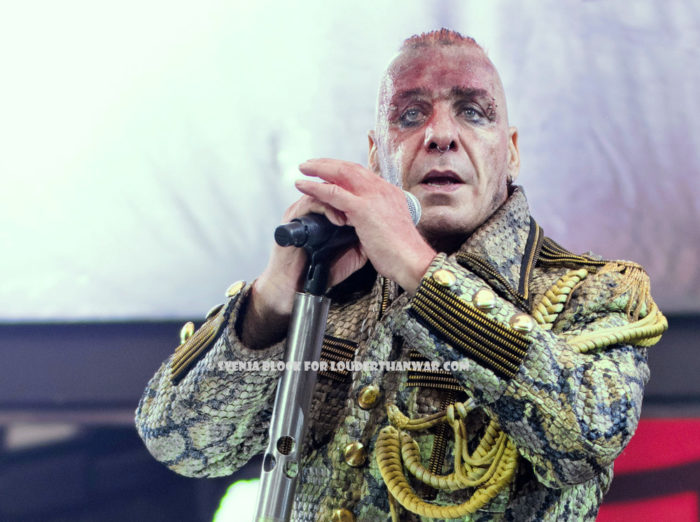 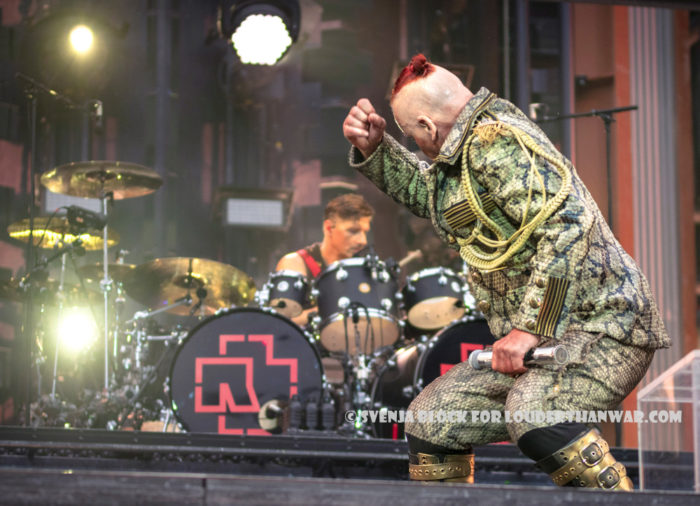 In Till Lindemann, the sextet possess a uniquely charismatic frontman who captivates via refreshingly larger-than-life drama. In this capacity, he shares more with the world of opera than a stadium contemporary in the rock arena like Bono Vox or Mick Jagger. This sensibility and aesthetic had a knock-on effect within the staging of the band’s performance. Pathos and darkness are revealed in many different guises. From a pram the size of a van being set alight during Puppe (resulting in a rain of ash being catapulted from different parts of the venue) to satirising and putting Teutonic nationalism beneath the microscope on Deutschland – the imagery is as dramatic as it is effective. In the case of the latter song, the setting of the venue and the size of the crowd provides a powerful conduit in referencing the rallies of a very different Germany from yesteryear. A counterbalance to the intensity is the thread of humour and lightness. Keyboardist Christian “Flake” Lorenz, for instance, spends most of the gig on a treadmill with directions and speeds altering at great intervals. He also takes a very physical comedic turn as a potential victim of the band’s figurehead during Mein Teil. During this ditty, the band’s figurehead dons a large chef’s hat after forcing Lorenz into an enormous cauldron. With a flame thrower at the ready, Lindemann blasts dark amber flares at the keyboardist who only narrowly saves himself from turning to dinner via well-timed ducking. This provides a unique slapstick element to the proceedings that’s extremely endearing. And it makes one all too easily forget the amount of planning and rehearsal that must have gone into getting the timing right for such an impressive spectacle. 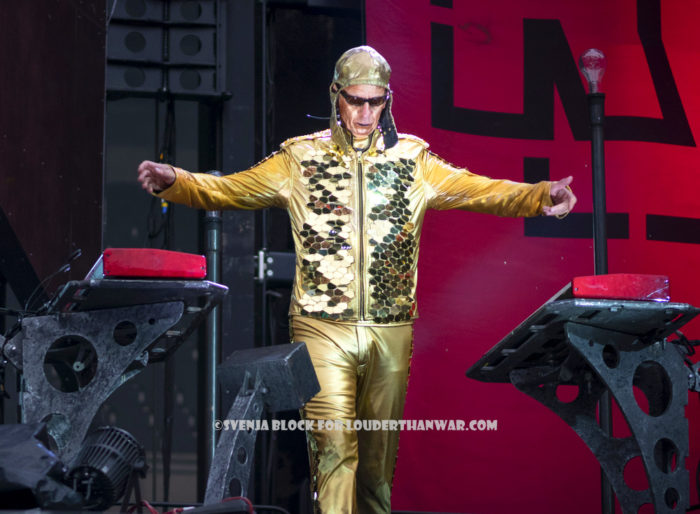 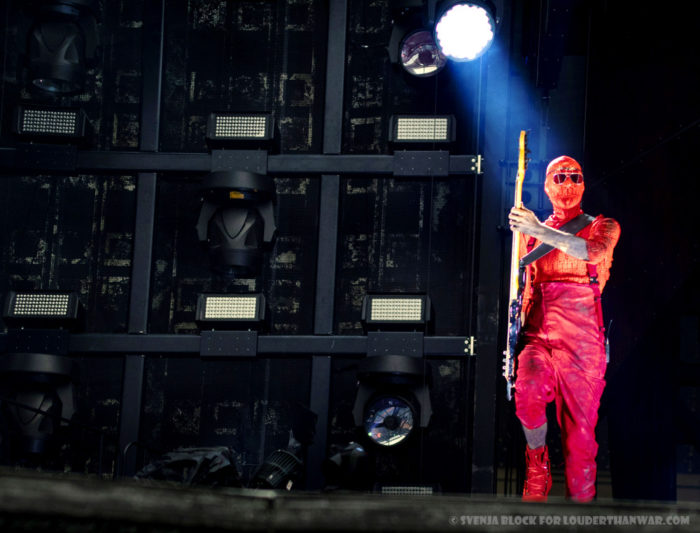 With such a big sound to recreate live, the quality and tightness of the band deserves an honourable mention. The dual guitars of Kruspe and Landers run the gamut from fast and heavily saturated to ethereal and clean with effortless precision. In perfect sync, the rhythm section of Schneider and Riedel powerfully co-pilots a foundation that straddles industrial, metal and dance elements with the former’s drums never letting up. Riedel, who never ceases to play for the good of the song, also reveals tasteful chops during the bass arpeggio intro of the aforementioned Heirate Mich.

Towards the end of the set, the band position themselves at Stage B. Located at the far end of the venue, Rammstein manages to quite literally take their show to every corner of the stadium. After performing the sublime Engel with special guest Duo Jatekok, the group make their way to the main stage in a very unique manner. Three rubber boats take Captain Lindemann and his crew back ‘home’ via the surprisingly un-treacherous sea of fans. There’s so much that could go wrong with such an arrangement. And, needless to say, the insurance ramifications must be immense for this part of the show. But the exercise goes more smoothly than any Dover to Calais ferry journey this reviewer has been on. Regardless of the risks, once they’re safely back on ‘dry land’, the band commemorate their arrival with an emotive version of Ausländer. 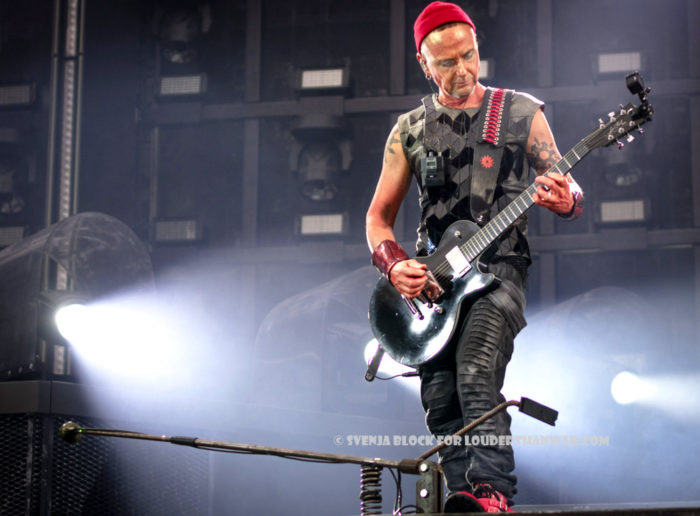 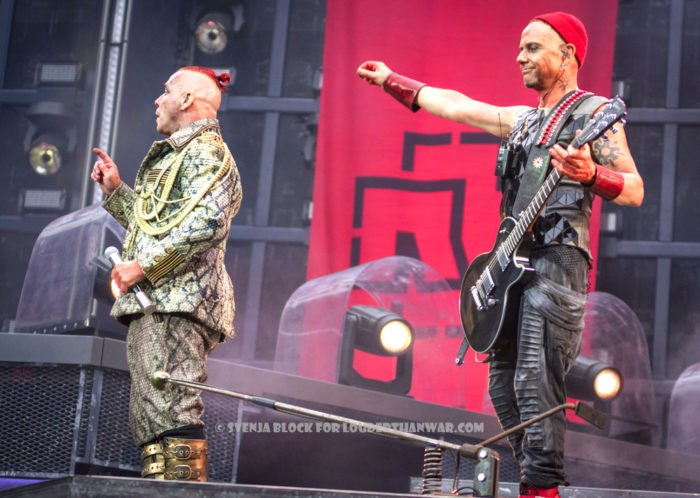 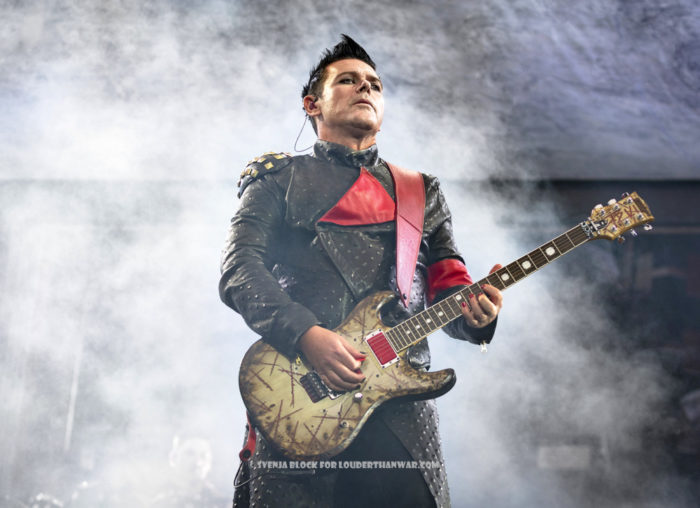 As the band wind up the final song of their encore, Ich Will, Lindemann addresses the audience for the first time directly. “You’re an absolutely amazing, fantastic audience. Thanks so much”. While I applaud his politeness, thanks are not needed. The audience was indeed fantastic and that’s because they were mirroring the magic displayed onstage.

“I need to get to Milton Keynes in a hurry” isn’t something I thought I would ever say. Let alone think. But when you add Rammstein into the equation, one’s hardwired beliefs get skewed all too easily. The same can be said of my aversion to stadium gigs. I’ve been to many of them. But, invariably, I leave these mass gatherings with a mantra of ‘never again’ echoing in my thoughts. There are so many inherent compromises to shows of this stature that the cons tend to outweigh the pros by a huge margin. Unless Rammstein are involved that is. 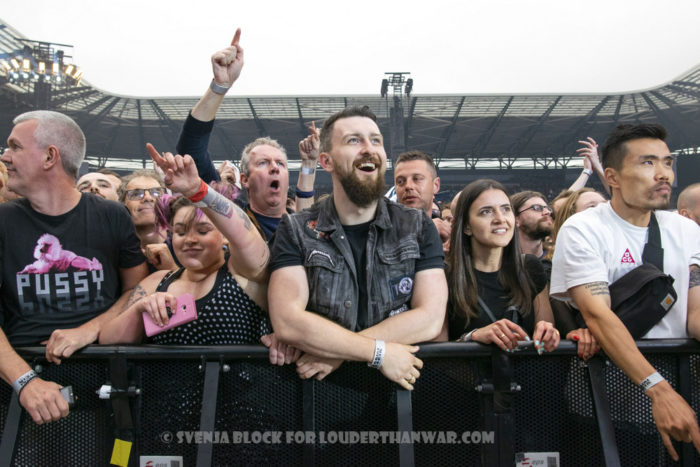 Please note: All Rammstein photographs are subject to a photo release form. Use of these images in any form is illegal. For more info please contact Svenja Block at blocksvenja@yahoo.com.