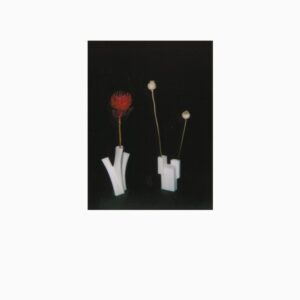 Félicia Atkinson: The Flower And The Vessel

Ambient music. The soundtrack to dinner parties. Cocktail music for cocks. Background and throwaway. Easy to create. All this nonsense are comments I have been on the receiving end of when discussing the genre. People who believe the world of ambient is summed up by paid-for Spotify playlists and Misery of Sound compilations. There are also musicians out there who believe they can create an “ambient” track with some quiet tones and weeping synths. Every one of those who believe these things obviously never fully explored the genre. Play these people Coil’s Time Machines and they will run screaming from its dense drone majesty. Play them The Flower And The Vessel and they will confuse themselves trying to work out where this music fits with their ill informed preconceived ideas for this is an album that slashes at the genre, pouring intelligence and atmospherics into an eleven track work that is unsettling as it is beautiful.

Félicia Atkinson is a master of this style of artistic expression as anyone who has listened to her work before will attest but with The Flower And The Vessel she not only surpasses her previous works but has created one of the most defining albums of the genre. This is a narrative driven piece that is conceptual in design pulling together the power of silence with the stark head spin of spoken word poetry best defined by the albums most unsettling moment You Have To Have Eyes.

Even when a piece is wordless like on the gorgeous Moderato Cantabile, Atkinson is telling a vivid story. The track travels through various movements slowly building into a climax that sounds like it features the sound of bleating animals. It is at this moment where your mind draws a connection between what we are hearing now and the work of Swans which is not something you would expect from an album sod as ambient.

Surrealistic poetry is cut through The Flower And The Vessel with tracks like Shirley to Shirley (all AI inflected tones) and Joan all adding to the cut-up feel of the album. Inspired by  “women who wonder, dream, and create vacant spaces in their art,” Atkinson shows us the power in femininity and of allowing space within composition.

Closing the album we have the behemoth Des Pierres which is an 18+ minutes long masterful display in how to take a listener from point A to point B with subtlety, exquisite use of spacial dynamics and of the utilisation of tones created by a variety of instruments including the human voice. Des Pierres is a collaboration between Atkinson and Sunn O))) Stephen O’Malley and it plays like a celebration of the art of collaboration with the piece feeling like the ultimate blend of two artists vision working as one unifying force.

The Flower And The Vessel is an album that requires your commitment and for you to create the correct atmosphere to fully understand its beauty. It travels well on headphones but when you take the time to allow yourself the space and stillness to listen to it you will be rewarded even more handsomely.The ultimate dreamscape collage, The Flower and The Vessel is the sound of an artist telling the most beguiling of stories which when listened to leaves you in a better place than when you started.