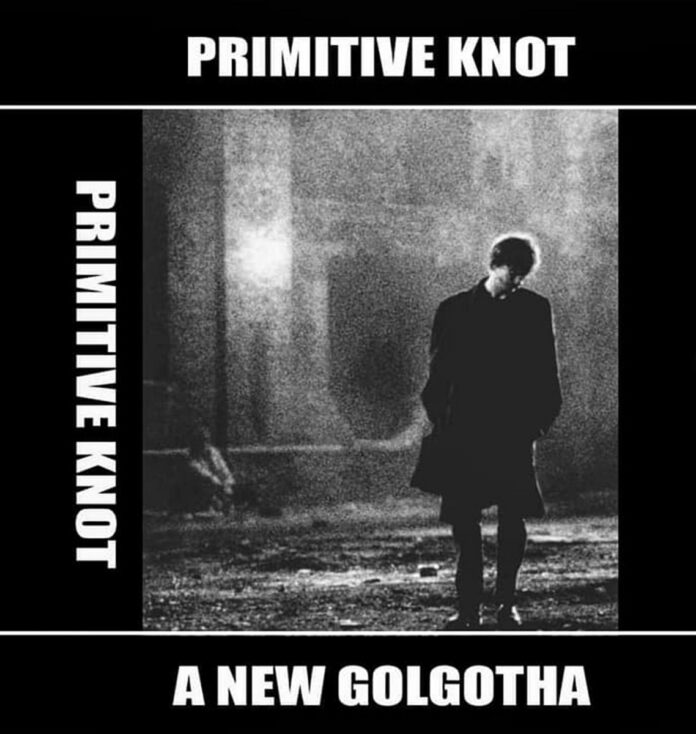 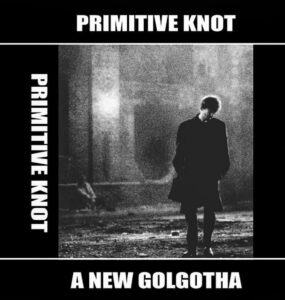 Primitive Knot returns with A New Golgotha, a fresh slab of industrial metal and quite possibly the heaviest sound in all of Manchester. Andy Brown shares his thoughts for Louder Than War.

The riffs on the latest Primitive Knot album are as heavy and unforgiving as I’ve come to expect yet, as always, there are layers to explore. From philosophy and Doctor Who to Motorhead and Sigourney Weaver; Jim Knot has always used distinctive imagery and iconography. Using cultural references to help contextualise the barrage of industrial noise thundering through the speakers. The image on the cover of the latest album is of David Thewlis in Mike Leigh’s brutal and deeply unsettling film, Naked. Released in 1993; the film is a bleak portrait of misogyny, crumbling mental health, dysfunctional relationships and existential dread. If the end of the world really is nigh and the game, as it were, really is up then we’re going to need some music. It’s into this harsh reality that A New Golgotha is born.

A one-man project, the ever-elusive Jim Knot has somehow managed to maintain an almost inhuman level of intensity over increasingly frequent releases. A New Golgotha stands as the third full-length Primitive Knot album released this year, fourth if you include the satisfyingly eclectic covers album, Triumph Of Deaf. All of this and I haven’t even mentioned the Star Of Asteroth debut cassette and a split album with Secondstroke. I can only imagine that Knot must compose riffs in his sleep, otherwise, I just don’t know how he finds the time. However he does it, I’m extremely glad he does. There are few artists that I’ve discovered in the last few years that are capable of creating music as heavy, absorbing and uncompromising as Jim ‘bring me my guitar’ Knot.

Make no mistake, A New Golgotha is a take no prisoners kind of album. Heads will most certainly roll. We’re a mere 40 odd seconds in before Knot demands that someone bring him his, “chariot of skulls”. The fierce title track opens the album with a snarling, industrial-metal riff. In the brief time between Primitive Knot albums, I almost forgot what heavy should (and could) sound like. The title track is a blistering and immensely satisfying slab of unfiltered heaviness. I honestly can’t think of another artist that’s nailing this kind of sound so consistently. Burn It All Down just about sums up the feeling you get from blasting the album through a pair of headphones. Pure sonic Armageddon!

Béatrice Dalle employ’s a typically ferocious metal riff and dark atmospherics as Knot intones, “beauty is a tyrant/ beauty is salvation…beauty is our only hope”. Against a backdrop of brutalist architecture, relentless rain and dread (some just call it Manchester), Knot finds some kind of salvation within this rather brutal ode to the iconic French actress. As usual, Knot pushes his sound firmly and defiantly into the red. The relentless Limited finds our guide swathed in a thick wall-of-sound and “adrift in anomie”. For the inexperienced, anomie is described as a social condition where someone exists outside social or ethical expectations. The album is populated by drifters, deserters and social outcasts. Oh, and plenty of riffs too.

Those looking for an easy exit won’t find it with the bludgeoning, Ziggurats Of Despair. “Suffering cleanses you” sings Knot as the heavens crumble around our ears, “preparing you for a new gravity”. Skull Life starts off sounding like the Melvins before descending into increasingly twisted noise. “Destroy your body/ skull life” instructs Knot like a young Michael Gira, “erase your mind”. An album of extremes, A New Golgotha doesn’t pull its punches. The explosive Freedom Is A Prison finds Knot floating in the endless void of space with only his trusty guitar for company. Riffs designed to rip through the thin fabric of reality and send you hurtling into blissful oblivion. If that sounds like your cup of tea then you really need to check this album out.

After battling with concepts of beauty and morality, Primitive Knot tackles time itself with sci-fi riff-fest, Time Crusher. Time, we are reliably informed, will squeeze the life from you. It might all sound a tad grim yet A New Golgotha feels like an album determined to shake you into action. Oblivion may very well be snapping at our heels, so maybe it’s time to get something done. This Is A Party takes the Beastie Boys ethos (Fight for your right to paaaarty!) and turns it into a cool, ZZ Top-via-doom metal party starter. It’s a hell of a way to close the album. A New Golgotha uses the usual Primitive Knot recipe to great effect: take a shed load of riffs, a dash of philosophy and bake until doomsday. The end of the world has never sounded so good!

Subscribe to his Bandcamp page HERE to receive all new releases.