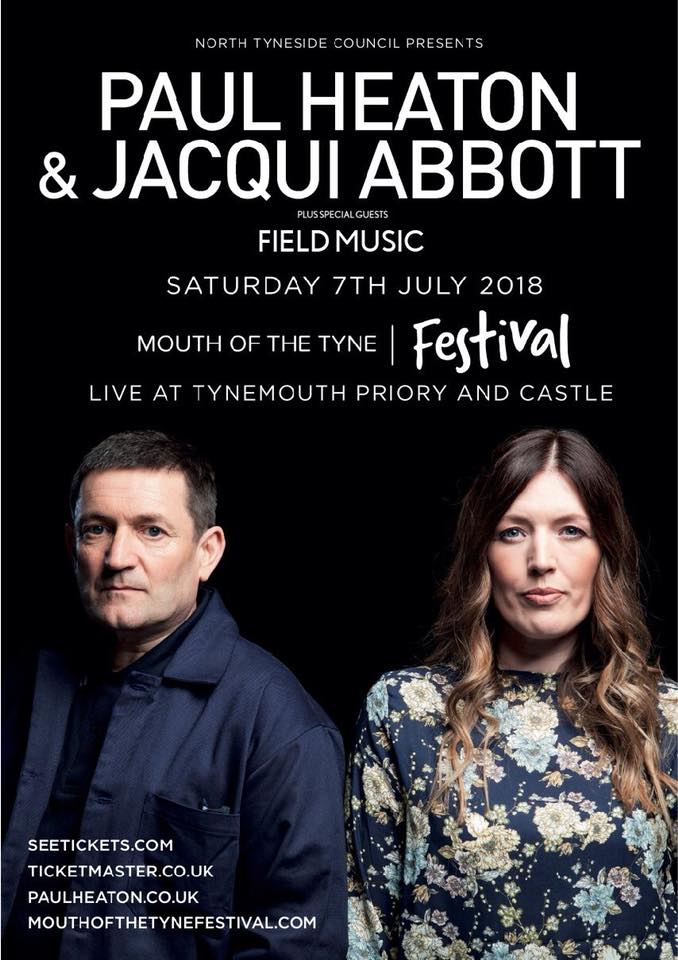 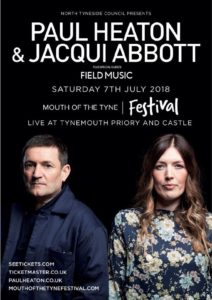 In the most wonderful of settings, Paul Heaton & Jacqui Abbott thrill a packed crowd with a nostalgia filled set that is equally packed with new classics.

One of the highlights of this years Mouth Of The Tyne festival is a sold out show from former Beautiful South members Paul Heaton & Jacqui Abbott. The pair released their third album Crooked Calypso last year, garnering much acclaim. Tonight opening the show though are Sunderland band Field Music who have also released another exceptional album to equal acclaim.

The Brewis brothers and their band are in fine form tonight as they open up with a plethora of hits including Count It Up, House Is Not A Home and The Noisy Days Are Over. All of which are well received by this boisterous and upbeat crowd, it’s understandable though as the chants of “Football’s Coming Home” are intermittent throughout the evening. Field Music feed off this and it creates a great atmosphere, their off kilter pop music perfectly complementing this scorching day.

With the crowd well and truly warmed up, Paul & Jacqui take to the stage to a rapturous reception as they open with I Don’t See Them. The aforementioned football chants are never far away throughout their set, with Heaton also complaining of a sore throat from shouting at the TV earlier in the day. The pair are quick to delve into their back catalogue with a plethora of hits from days gone by. Both The Housemartins and The Beautiful South are amply represented in this career spanning set.

Whilst there is a lot of sadness that exudes from their lyrics there is something wonderfully uplifting about this set, One Last Love Song and Rotterdam (Or Anywhere) are early highlights as the pair continue to delight this packed crowd. The passion and heartfelt nature of I’ll Sail This Ship Alone takes their set to the next level as the words can be heard being sung for miles around.

In spite of Heaton referring to a number of members of the crowd as organised picnic wankers, whilst some may agree with such a statement it was almost impossible to find someone who wasn’t singing along to every word. Old Red Eye’s Is Back still possesses a huge intensity and affection, these old tracks barely seem to have aged and in many cases still feel as relevant as ever.

The latter part of their set is awash with ecstatic hits, Perfect 10, Good As Gold (Stupid As Mud) and Song For Whoever following in quick succession as their main set comes to a triumphant close. Followed by a double encore, the duo close out on Caravan Of Love, rounding off this mammoth set in perfect style. From a nostalgia point of view it’s a wonderful walk down memory lane, but equally their new material fits perfectly alongside it. DIY, I Gotta Praise and new song Seven Inch Singles all receive the same reception as their older material.

As the confetti cannons go off and the huge balloons fill this idyllic setting you really cannot ask for more, the perfect weather, an exceptional line up all making for an amazing day out!