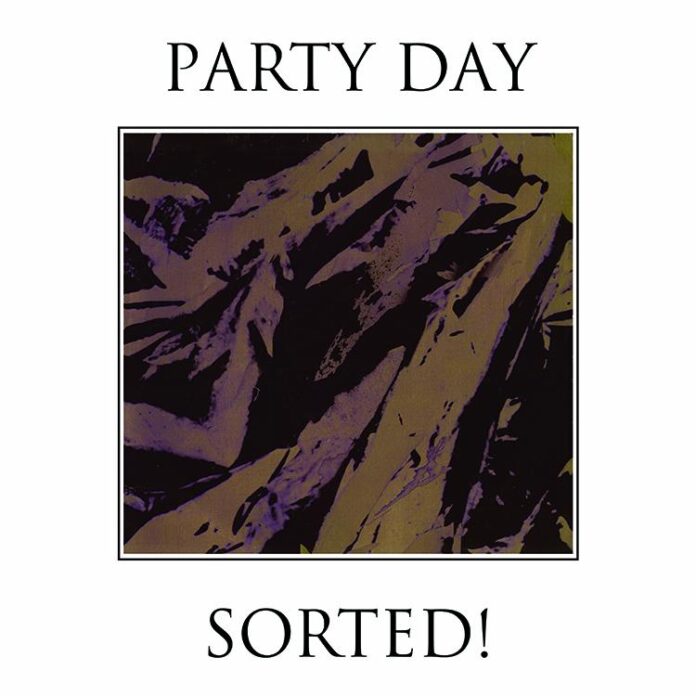 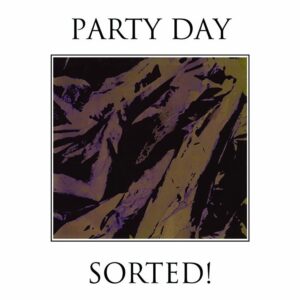 A compilation bringing together everything released by Barnsley post punk outfit Party Day, including their albums Glasshouse and Simplicity, plus single sides and unreleased material. Ian Canty gets the party started…

Party Day formed in Barnsley in 1981, with drummer and band mainstay Mick Baker being joined by Carl and Greg Firth on bass and guitar/vocals respectively, plus Martin Steele also playing guitar and singing. They took the darker side of post punk as a starting point i.e. The Cure, The Banshees, Joy Division and perhaps a touch of Killing Joke’s intensity too. From this they quickly developed their own identity, while never entirely deserting the early gothic sound that was just rising to prominence.

By the time of their first release, the Row The Boat Ashore single in 1983, they had slimmed down to a three piece with the exit of Greg Firth. This 45 was issued on the band’s own Party Day imprint and became something of a “Peel show favourite”. It was also well-received in the UK music press and the next year furnished us with follow up 7 inch Spider. Soon Party Day were a quartet once more with the addition of Dean Peckett on vox and guitar. An EP and album, both titled Glasshouse, followed in 1985, with the extended play being released by Rouska Records. A while later Martin Steele was the latest Party Day casualty, being replaced by Paul Nash. A second LP Simplicity came out in 1986, but by then Carl Firth had opted to leave and though Shaun Crowcroft took his place, no further recordings emerged and the band split for good in 1988.

What we have here is the complete Party Day vinyl output, plus some unreleased tracks. There is a very informative booklet included with period photos and reviews of the band, which only really lacks a full history and a breakdown with recording dates for the tracks to make it definitive. All things considered, it’s a very nicely presented set. On listening, the fiery undertow that the rhythm section imbue their music with put me in mind of what a goth Ruts might sound like, which was a good first impression to make. There are occasions early on when The Cure influence threatens to overshadow the whole thing, but the firm musical base helps keep things moving along with a certain freshness.

The first CD starts with the first three tunes from the Glasshouse album. Each helps to give one a fair grasp of Party Day’s modus operandi. Rabbit Pie begins with strong bass and drums which are joined by fuzzy swathes of guitar to deliver a convincingly atmospheric and quite bracing effect. Fading in comes Firehorse, emphasising the “lead bass” method which marked their work, and then the more corrosive Carousel rumbles with spiky menace. The Party Day song itself verges on standard goth rock, but some lithe drum work gives it zip and the distant sounding backing vocals are actually very effective.

An early version of Glasshouse comes from 1982. This tune would be recut for the Rouska EP three years later and this appears on disc two here. In this form it comes over as charming psych pop, very agreeable indeed and the synth moves of Opium Gathering are pretty neat as well. First single Row The Boat Ashore retains a real sense of adventure and mystery. It is no wonder that the music press lapped up this lively and inventive sound at a time when people were crying out for something new. Spider, the next single, starts off strange and fizzes with energy and its hypnotic flipside, Flies, has soaring main voice and muttering backing vocals kicking it along. This first disc ends with what many consider Party Day’s classic Atoms. An instantly gripping and relentless rhythm is quickly established for synth keys to glide over the top elegantly, while rushes of guitar noise and dramatic voice gives the air of something truly invigorating.

Disc two seems to mainly concern itself with the band’s later material, including the Glasshouse EP and the Simplicity album, with the ebullient groove of Bites And Stabs compilation number Borderline getting things underway. Then comes the Glasshouse EP in its entirety, with the pure pop appeal of the title track, a slightly garage-tinged strut entitled My Heroine, Let Us Shines’ flowing and exciting brio and the anthemic Smile all impressing. This record definitely marked the start of a more accessible turn in the direction of Party Day, but they managed to do so without really compromising their original values.

The latter part of this disc is more or less thrown over to the tracks that made up the Simplicity LP from 1986. Showing a decent amount of development from their roots, here Party Day score immediately with crisp sounding opener Sovereign, It’s simply a driving tune with a hook that is well accomplished (if a little reminiscent in patches of early U2). There’s plenty more of that ilk to enjoy too, with the lighter approach paying off on both She May Be Blind and Stay My The Heart, the latter of which to my ears shares something with New Order’s first few records.

Later on the album The Other Side oozes good-time pop/rock appeal and sounds a little like a more rock & roll Psychedelic Furs. The thick rhythm of style of Career is almost r&b at its heart, but this has the positive side in furnishing the tune with a bouncy brio. The slowly thudding melancholia of the epic Glorious Days is a real ace in the pack here, one of this set’s real highlights.

Though there is the occasional ponderous moment on this album when things do drag a little and the band’s enviable energy seems to fail, Simplicity still makes for a pleasing and attractive listen in 2021. That it proved to be the final vinyl foray for Party Day means there is inevitably an air of unfulfilled promise hanging over it, but by my reckoning this LP is a pretty satisfying collection and represented a good way for them to go out on with their dignity fully intact. This set is curtailed by the chugging Surge which, complete with cheesy sax, does seem to be aimed squarely at the charts. It’s not one of their best, but I suppose does give the listener a fair notion idea of where Party Day were heading if they made it to the late 1980s.

Back in the 1980s Party Day got a lot of positive press, but for some reason their self-released records didn’t make a dent on the independent charts. The band’s line up changes probably didn’t help and these things combined so they subsequently didn’t make a great deal of headway. Which was a shame, because on the proof present on Sorted! they had plenty to offer, being a band that managed to pull a few neat wrinkles out of goth and post punk with imagination, energy and an endearing enthusiasm. An eye-opener if you thought they were another run of the mill bunch of gloom and doom merchants, Sorted! has enough good melodies, tough musicianship and exciting performances to pull Party Day a good distance away from the goth also-rans.