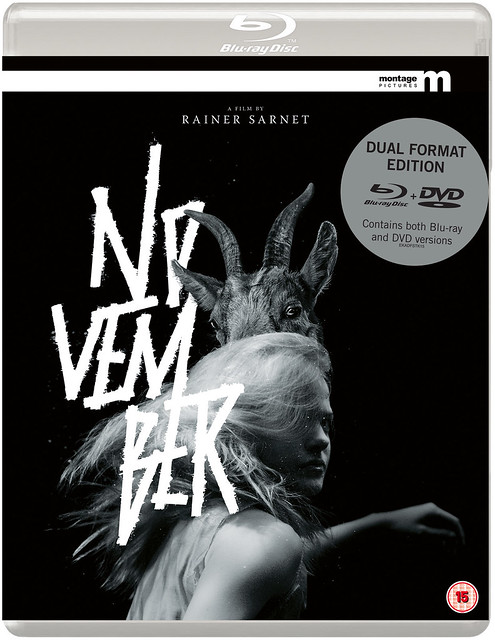 Jamie Havlin assesses one of the most inventive and fantastical dramas of recent international cinema.

November opens with striking bleached out images of nature: trees, ice, and a thirsty wolf. This is a barren and northerly landscape and, as we shall quickly discover, it is also home to some very strange creatures.

A bizarre contraption that looks as if it has been mostly made from farmyard scrap, makes its way to a barn. At its centre is a cattle skull and it has three appendages that act as limbs. On each is a long and sharp blade. It breaks down the barn door and manages to chain up a cow. It then drags the cow out and flies into the sky, those three appendages now acting as helicopter blades, the poor beast hanging on from a chain and clearly not enjoying the ride. 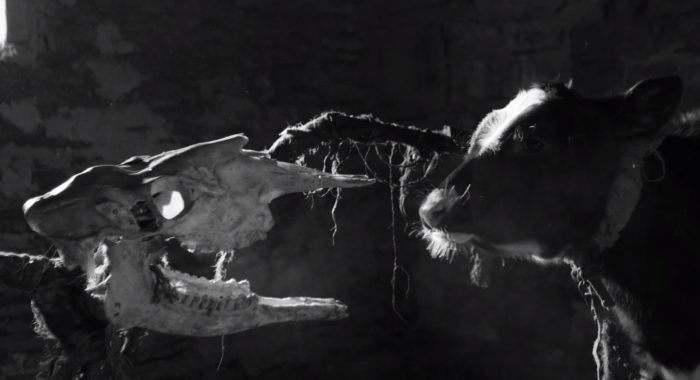 This is arguably the weirdest opening to any film that I have ever seen and there’s plenty more peculiarities to come from director Rainer Sarnet. Soon, another creature made from scrap squirts a black mucousy liquid at an old man, and demands work.

These mechanical creatures are known as kratts, and I initially guessed they must be a figment of the imagination of Andrus Kivirähk, adapted from his novel Rehepapp ehk November. After a little research, though, I learned they were commonplace in Estonian folklore.

Kratts can come in a variety of shapes and sizes. Once constructed, they are magically animated into life by the Devil with the aid of three little drops of human blood. In exchange for this supernaturally created servant, the soul of its owner will belong to the Devil once they die.

November contains many vignettes involving a wide cast of characters, but at its heart lies the story of Liina (Rea Lest) and Hans (Jörgen Liik), two of the younger members of the community (few films incidentally feature such a range of weatherbeaten faces). She is desperate to marry him, but the path of true love doesn’t run smoothly for Liina. Or for Hans, for that matter. 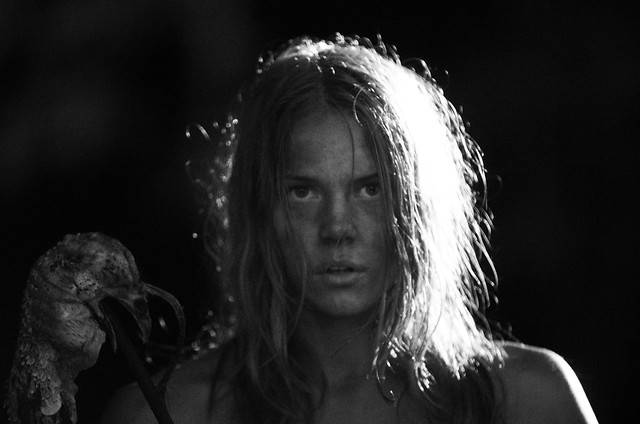 She has been betrothed to a grotesque old farmer after her father made a deal with him during a drunken visit to the local bar. Not only that, but Hans immediately falls for a visting German baroness (Jette Loona Hermanis), who stays with her father in a large, albeit rundown mansion nearby.

Hans is far below the Baroness in terms of society’s class divisions. She is aristocratic. He is from an impoverished village, where many have to survive on a diet of tree bark and bats.

November is beyond batshit crazy. Midway between Valerie and Her Week of Wonders and an animation by Czech surrealist Jan Švankmajer; there’s love spells, a day of the dead, human sized chickens, werewolves, sleepwalking, a talking pig and plague – although this isn’t that great a problem if you put your pants over your head: ‘The plague will think we have two arses and won’t dare to touch us.’ Well, according to one of the leaders of the community anyway.

In Rolling Stone, Peter Travis proclaimed November ‘a new midnight-movie classic.’ It was selected as Estonia’s entry for the 90th Academy Awards Best Foreign Language Film category although it failed to be short-listed for the big prize.

Director of Photography Mart Taniel did though win a number of major awards for his superb cinematography. His inventive infrared photography certainly deserved the accolades that it received at both Tribeca and the American Society for Cinematographers Spotlight Awards.

There’s a great score too by Polish musician Michal Jacaszek, which oozes dread at times and reminded me of Jóhann Jóhannsson’s work on Mandy – another truly bizarre slice of cinema.

Extras on November include the trailer and a collector’s booklet featuring a new essay by film critic and writer Alexandra Heller-Nicholas.

For more on the film: https://eurekavideo.co.uk/movie/november/