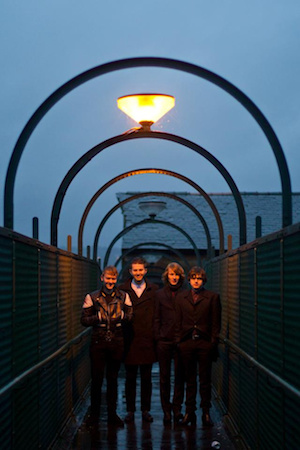 Burnley’s most terrifying band, The Strange, are back; bigger, badder and nastier than ever…Louder Than War’s Sean Diamond takes a listen.

Fearsome four piece The Strange are back to play havoc with your eardrums and haunt your dreams in their own, inimitable Hellbound fashion. As anyone who has given their 2012 album ‘Sleep’ a spin will tell you, these guys don’t muck around when it comes to delivering bloodcurdling mission statements plucked from the belly, bowels and bumhole of Beelzebub himself, no siree. These two new tracks mark a progression in The Strange’s sound; beefed up, turned up to 11 and ready to brawl. Get those gloves on, this one could turn messy…

Round One: Opener ‘Witchcraft’ merges a Zeppelin/Sabbath 70s riff with a doomy, sludgy desert rock/psych backbone, creating a sonic harbinger of considerable power and strength. Spaced out vocals, strung out bass, drums so punishing you can practically taste the sticks….. and all in just under two minutes. Impressed? I baked my hat and ate it for supper (no, really). Next round please….

Round Two: Even more distressing. ‘Penny Black’ ups the ante even more (sickos), a truly devilish concoction of sounds, smells and sights straight from one of Nick Oliveri’s worst nightmares. Murky vocals about something starting again and someone who will ‘never age’ (I think), set to a drug-fuelled jam between ‘Locust Abortion Technician’ era Butthole Surfers and ‘Second Coming’ era Stone Roses, complete with a mind buggeringly heavy riff beamed straight from the land of Mordor. All in just under three minutes. Impressed? I rewrote ‘Nausea’ and declared Sartre a fraud. True story….

If these two tracks are anything to go by the next album should come stamped with some kind of official government health warning, for fear it may fall into the hands of the vulnerable or unsuspecting. Download this release by all means but remember kids, whatever you do DON’T, I repeat DON’T try this at home. You never know what you might conjure up…

You can catch The Strange live at The Mad Ferret, Preston on Saturday (1st March). Enter at your own risk.

Purchase the new single from The Strange at their Bandcamp. The Strange can also be found on Facebook and Soundcloud.