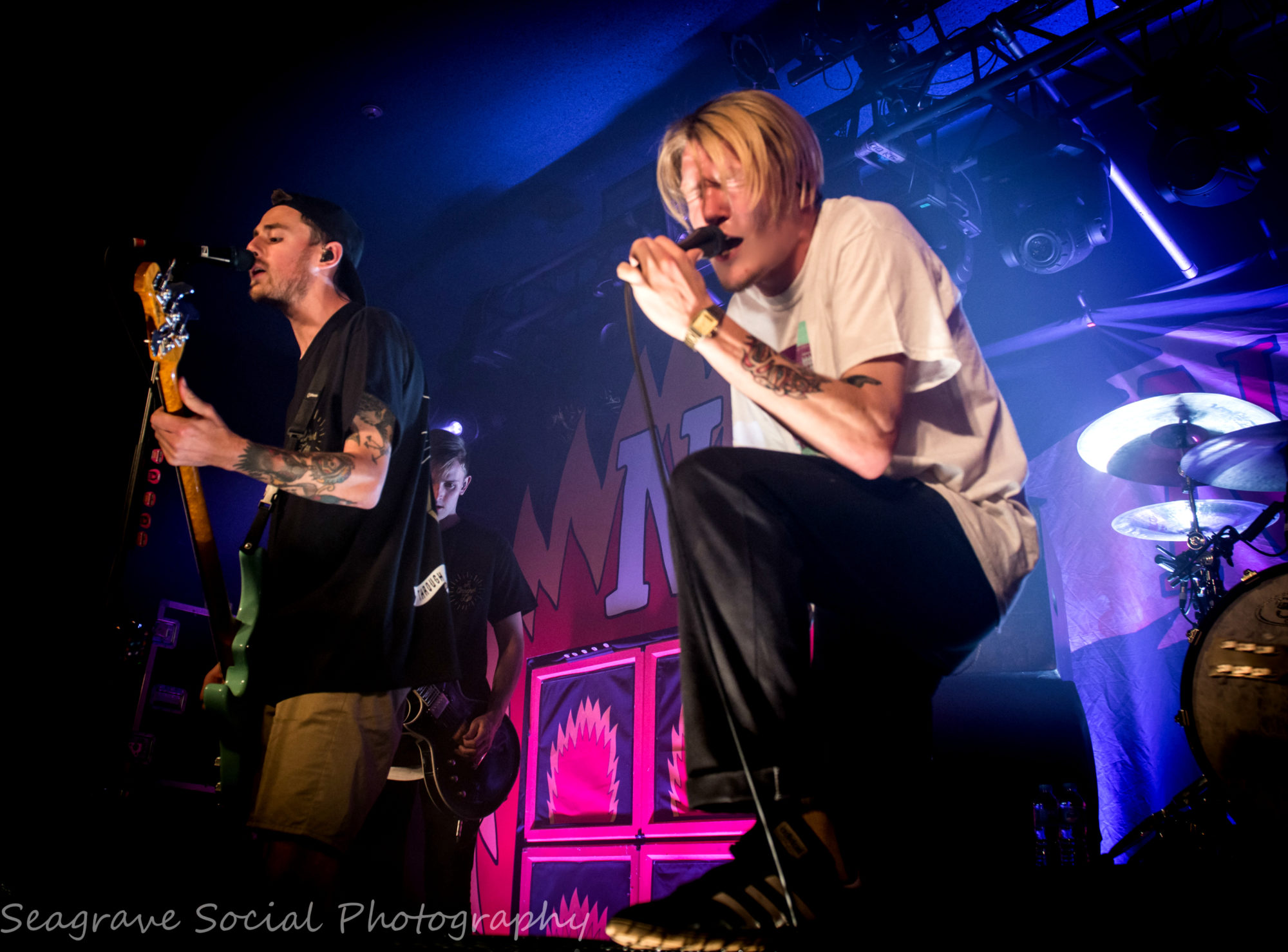 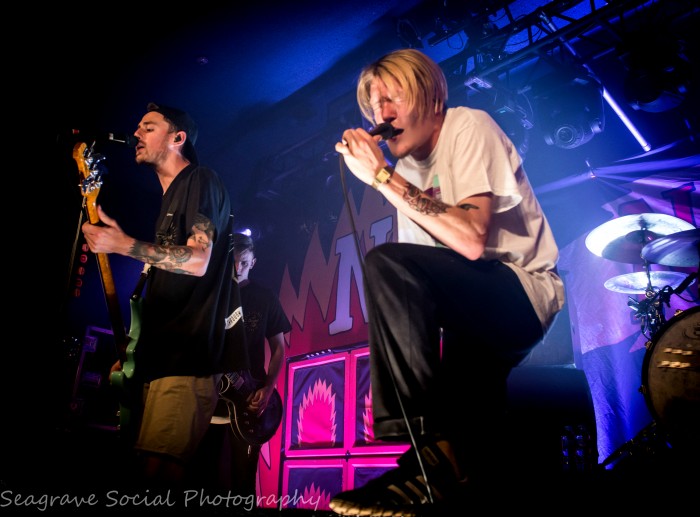 Liverpool’s WSTR might be kicking things off tonight which they do in about 10 seconds flat, almost clearing the bar area and sending the venue into a mini frenzy. Fair Weather seems to get momentum at peak levels instantly, the SKRWD EP track having found its way on too many a playlist in the past 7 months, it’s loud, it’s fast and so damn catchy it is impossible not to sing-along too.

Sammy Clifford aka Swifty has no problem charming the 1000 strong audience to crouch down mid-way through a bombastic cover of Limp Bizkit’s Break Stuff as the guitars and drums quieten. Once the music drops back in the crowd like a mass of releasing coils bounces in unison into the air. A surprise cameo from Neck Deep’s Ben Barlow on Graveyard Shift, another SKRWD track, adds an unexpected bonus to an as expected short set which, despite its brevity delivers big on fun, inclusion and likable melodies.

Creeper walk on stage almost one by one taking up their positions on drums, guitars, bass and keyboard; singer Will Gould arriving last as they built up the feeling of anticipation to a final thunderous round of applause as the machine gun rhythm of VCR fills the air. From Puccini to punk Creeper pack in an ingenious wealth of riches into perfectly executed individual mini operas full of emotion, drama and spectacle. The delivery is undiluted gratification from start to finish being intensely deep while being extremely warm-hearted in the same instance. 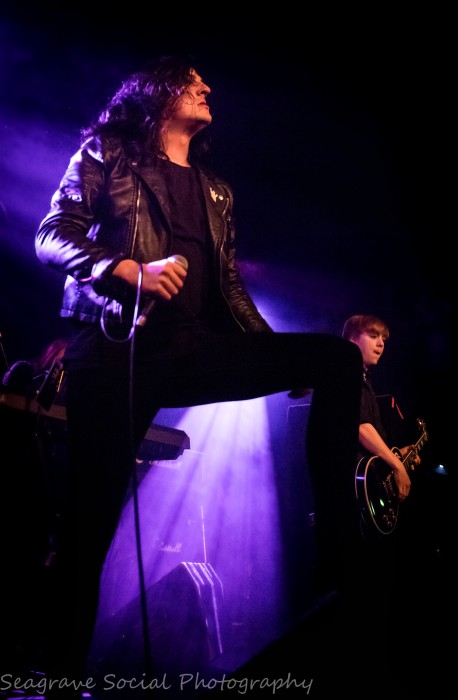 Black Mass follows its theatrical thundering bass marches and thuds around a powerful and ingenuously captivating chorus to Gould’s breathy bridge Darling I see you with those open sleeping eyes. In the night time under moonlight, under sweeping starless skies, So can I come over? But the eye of the storm passes and like dropping tornado’s guitarists Ian Miles and Oliver Burdett, drummer Dan Bratton and bassist Sean Scott whip up a frenzied conclusion that is definitely matched by the audience.
Leeds is spoiled by full and near complete set from Creeper and they use this to maximum effect guiding and interacting with the audience at times to amplify the performance. The local crowd doing what they do in a quiet moment in venues from Skipton to Scarborough and everywhere in-between, above and below within the county “YORK-SHIRE YORK-SHIRE YORK-SHIRE” throws the band momentarily as they mishear the local sound of patriotism.

The multi-layered poetic landscapes of Misery has a building and fading melody that marries dreamily with the lyrics awash with emotional wretchedness, delivered raw and Bukowski-esque. The flavour of which is revisited in Lie Awake a track unexpectedly anthemic for a song about obsessive love, however, this is what makes Creeper so brilliant their paradoxes; Allergic is another example. So damn joyous yet is (personal interpretation) about a lover that is so toxic they are literally making you sick. They tribute Henley’s Ghost to a recently lost friend: its slow waltz tempo and long, broad notes lend themselves to the feeling of swaying and misplaced time. The lyrics are as they are sung; intense; it is a song full of emotion that is clearly special to the band and is another, if another was required, demonstration of the bands far-reaching proficiency.

Creeper could if they were inclined score a Broadway show, soundtrack a movie or headline a festival, they have the creative capacity to convey poignancy, melancholy and heartache as well as determination, exhilaration and elation in a way that is so captivating that what you get remains unreservedly insufficient. Encore – to infinity and beyond (yes I went there).

Giving credit where credit is most defiantly due Neck Depp certainly deliver one hell of an energetic performance starting by exploding on to the stage in a mass of lights and smoke with Citizen’s of Earth the start of which is definable just about over the screams. The crowd surfers are rolling frontwards at breakneck speed the security without pause assisting another back to their feet over and over and over again. Without pausing Deep Neck power forward into Loosing Teeth, from their debut Wishful Thinking, it’s stylised vocal changes are less refined live and it gives it more depth and freshness. The thunderous turmoil’s that is Gold Steps, Crushing Grief and Over and Over race by as guitarists Matt West, Sam Bowden and bassist Fil Thorpe-Evans jump about on flame adorned speaker stacks as Ben Barlow races from one side of the stage to the other.

Serpents and Kali Ma allows Barlow to show his melodic vocal abilities which he does with real conviction. The three bands on this run have been touring together for some time and have noticeably forged solid friendships; members of both WSTR and Creeper have cameo-ed during the Neck Deeps sets this tour. Tonight Creeper keyboardist Hannah Greenwood duets on A Part of Me her charming vocal adds a striking contrast to the brash style which Barlow uses.

For drama’s sake the band briefly leaves the stage to rapturous applause Barlow initially returning solo for a three song encore. The pace has slowed, but the grittiness remains in part as Barlow delivers an acoustic Head to the Ground, followed by a wistfully melodic December which has moments of both tenderness and bitterness. Finishing the night as it started Can’t Kick up the Roots is an apologetically simple yet undoubtedly effective crowd sing-a-long that delivers everything it needs to bring this high energy night to an end.

Neck Deep‘s sophomore album Life’s Not Out To Get You (Hopeless Records) is out now and available on CD, LP and DL from the usual retailers.