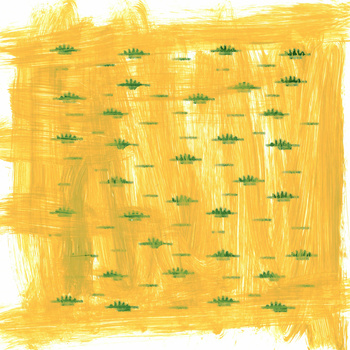 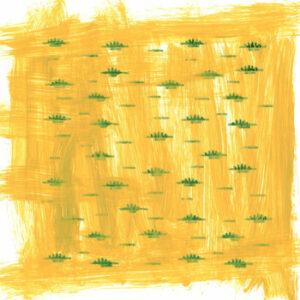 Nat Lyon’s previous releases have doggedly challenged the listener with an uncompromising agenda that throws regular spanners into the works, just to keep us on our toes. As someone perversely drawn to so-called difficult music, I’ve never had a problem with that. He’s invented his own genres of ‘pastoral punk’ and ‘experimental trash’ to nicely hoodwink the listener and which allow him to do whatever he wants. five-meter intervals ( I nearly asked about the lower case but resisted the temptation) sees him slowly emerging from the low, rural mist that enveloped his previous records and walking towards the light of an imagined reality with dogs, charts and attitude in tow.

This curve-ball of an album comprises eleven subtly linked vignettes that are surprisingly accessible in tonal influences ranging from Postcard Records pop to Cleveland post-punk to what you can only imagine Messrs Bowie, Visconti and Eno left on the cutting room floor after making Low.

Lyon’s entirely self-assembled album sees him, ironically, take a back seat. Rooted as always in the Connecticut environment, his trademark reed of a voice is often scaled back in favour of instrumentals and the spoken word, occasionally in someone else’s voice. Songs depart before they fully arrive, cleverly leaving a recurring hook that clings well after the end. As ever, Lyon’s trick is to make this stuff sound improvised when I suspect it’s been deeply thought out and very carefully assembled.

The fevered imagination at work here is often just accompanied by a casual drum beat and echoing guitars (‘we will never be’). As atmospherics go, it leaves the listener to paint their own canvass. ‘We will never be as young as we are tonight’ is a sample from the Take Off Your Sunglasses radio show and artfully circulates so that the throwaway line begins to resonate like a subliminal code, not a million miles away from Boards Of Canada’s oblique but powerful technique of enveloping a polemic inside a bubble of semi-danceable pop.

‘Steinberg harshes Cage’ “is an imagined encounter in which Steinberg does a painting on Cage’s score for 4.33”. It’s possible that The New Yorker illustrator met the avant garde composer but highly unlikely that any conversation between them took place against a backdrop of Pere Ubu guitars, another oblique influence which I spot on the psycho acoustics of ‘recurring theme’ (the guitar-like loop from Ubu’s ‘Heaven’ is omnipresent). For anyone familiar with Lyon’s work, these songs are revelations as they offer a cadence and a structure largely absent from his previous work.

Lyon is keen to stress that the many characters who populate his songs are fictional and I’m sure they are. But these are object lessons in soul-bearing, with everyday sounds of passing cars and barking dogs only adding to the feeling that we’re intruding (with the owner’s consent) in a very authentic slice of his own entirely non-fictional existence. Like for many of us, the gap between reality and imagination is virtually non-existent.

On some tracks (‘tazzer’) he sounds positively energised, if only in taking out his frustration at people who dare to live” in a temporary autonomous zone” with headphones on.

’82 or 84’ echoes a John Carpenter score with dramatic piano stabs and ominous horns against a run of indecipherable German spoken words.

Despite this seemingly scatter-gun approach, it’s to Lyon’s credit that the album hangs together as effectively as it does. Even in its harsher moments there’s a unifying sense of bucolic calm. Despite the stubborn idiosyncrasies, he’s beginning to compromise and let the myriad influences rise unfiltered to the surface. ‘arrival’ has the same treading water sense as Art Decade, the solitary heartbeat drum bringing to mind a decaying Berlin rather than the pre-dawn New England pastures from which Lyon draws his daily influence. ‘#daytripping’ might be a love song, it’s certainly a nostalgic, dreamy meditation on what he can see around him –

And here’s the thing. There’s more major chords, fewer tantrums and on album closer, ‘song 11’, an unrestrained joy at finding a riff and being unafraid at letting it soar. The track builds to as wide-screen as he gets and then sensing his own nervousness at sharing too much of a good thing, it ends.

Despite the authentic DIY ethic and eccentricity, Nat Lyon is a shrewd artist. He positions himself in gaps that invite more questions than answers. five-meter intervals (again, no idea what it means) manages to sound angular and taut on one listen and then pregnant with meaning and gratitude the next. That’s quite a skill. 11 songs, 28 minutes with depth and nuance at every turn.

I sense there’s a lot more to come.

Find Nat Lyon on Twitter. Check out his other project The Landseers.