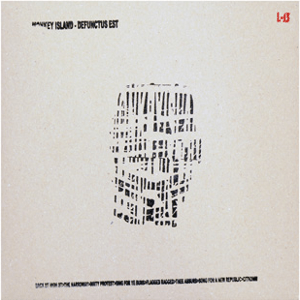 ‘Defunctus Est/Baby Don’t Blues’ 10” EP, limited edition release comes, in the tradition of vinyl, with all the pleasures of anticipation. From cover design, hand printed by Pete Bennett at L13 Gallery, to the ritual of placing the record on the deck, the build up intensifies expectation of the sound textures, straight rhythms and vocals – projected with the authenticity of a live performance. (In homage to the digital age there is a download code)

The recording is a creative affirmation taking us to ‘œthe terrain Monkey Island have been inhabiting’ since their definitive ‘Luxe et Redux’ 2010 release. Pete Bennett (vocals, guitar), Andrew Speakman (bass, vocals) and Sam St Ledger (drums, vocals), deliver sounds that bleed into one another with stressed, urban, displaced wordplay and broken down imagery of 21st century grime. The fractured, spiked recordings are true to the band’s art, garage, punk roots; laced with shots of rock and metal, cut through to the quick with sharp irony and a move into a sometimes melodic territory. The 8 snapshots of the world we inhabit are delivered with uncompromising, intense, steeped language and driving rhythms of the political, societal and personal. Monkey Island’s tangible embrace of textured sound and enigmatic imagery-laden verse is rhythmic, punctured and punctuated.

‘Back St High Street’ creates the vision of an urban, culture clash, consumerist nightmare. ‘Narroway’, with a literal sense of constraint, vibrates dark humour in the lyrics “I’m the water board champion of Guantanamo Bay’, and is followed by the surly ‘Dirty Protest’: “this is all yours you can take it back”. With harp instrumental and tongue in cheek anthemic rallying and a synthed hint of the subliminal, comes the balladeering ‘Flagged Ragged’. Guitar and bass underpinned with percussive echoes on’ Thee Absurd’ project every cliched, coined phrase and like the blacksmith at his anvil, fashion a new entity. Two instrumental tracks blaze affirmative sound with uninterrupted drive.’ Song for a New Republic’ has the melodic bass underpinning riffs of intent and a wry military step to close. ‘Sing for Ye Buns’ is an Iron Giant march across the urban landscape. Drawing to a close with the fractured Citkom, Defunctus Est is ‘the fine art of noise’.

From the head-on, intense, embracing energy of Monkey Island flip the vinyl for the The Dublo’s three track ‘œrevisionist’ bass, guitar and harp, twighlight mood. A debut release and a taste of the band’s recent creations. Potent tones on ‘One Way’ emerge from a grainy backdrop of fused, cross-over ‘œgarage blues’ with grounding percussion from Renato Pimenta, and echoing, outpost road-trip harp from Craig Shaw (Excellos). On the gentler, regret tinged ‘œBaby Don’t Blues’, ‘œfrisson’ charged contra bass and vocals from Rowan Lambourne-Gibbs, melodic guitar (Pete Bennett) and haunting emotion from Jeremy Ison on harp, encapsulate the bittersweet pitch of the song. Instrumental ‘Yer Zero Blues’ swings the mood into a straight talking affirmative climax; a teaser that provokes the urge to hear more.