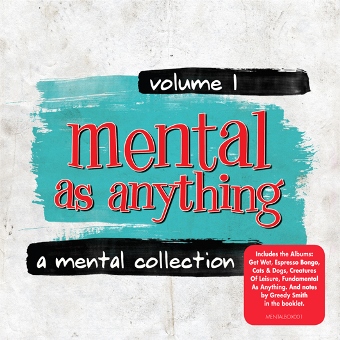 Mental As Anything – A Mental Collection Volume 1

First five albums by the Aussie New Wave quintet, best know for the worldwide “Crocodile Dundee” tie-in “Live It Up” but with a long history beforehand reaching back to the Sydney art/pub rock of 1976. Ian Canty slings another snag (while having no idea just what that is) on the barbie and says “no, this is a knife” among other poorly judged Antipodean puns……..

Australia’s Mental As Anything (actually two of them were from New Zealand, but we’re sidetracking) are pretty much forgotten today apart from that hit from the soundtrack of amber nectar salesman Paul Hogan’s brief day in the sun. That’s a shame because they had plenty to offer in an off-beat way and this upcoming release from Demon tells their story through their first 5 long players….

Formed in the middle of 1976 by art students Chris O’Doherty (later to take up the ocker name of Reg Mombasa) and Martin Murphy nee Martin Plaza, they arrived at their classic line up in 1977 with the recruitment of a new bass player in O’Doherty’s brother Peter. Completing the version of Mental As Anything heard on this box set were drummer David Twohill (aka Wayne Delisle) and singer and keyboardist Andrew “Greedy” Smith. They slowly built a following and after putting out their own EP “Mental As Anything Plays at Your Party”, the lead track “The Nips Are Getting Bigger” (it was a drinking song – obviously not to play up the Australian stereotype!) was put out as a single in it’s own right and became a massive hit in Oz.

First album “Get Wet” (self-titled when released in the UK on Virgin) sets out their stall; if they had been UK based they would have been a shoe-in for Stiff. Mental As Anything at this stage took their sonic template from “This Year’s Model”, but the band were way more light-hearted that the acidic approach of EC round that time. In fact it’s tempting to say that in 1979 they were the Aussie equivalent of Squeeze, mostly light-hearted and good-time New Wave but sometimes deadly semi-serious too. “Egypt” the third single foreshadowed “Live It Up” and was a perfect example of their perky pop skills and if having three writers in the band with their own separate styles occasionally made for a slightly disjointed listen, they had enough in common for it to work and “Get Wet” is good, punchy début LP.

This was followed by their second (reviewers like to say “sophmore” don’t they, but we’re not in some sort of US college are we?) collection 1980’s “Espresso Bongo” (named after the Cliff film). “Troop Movements In The Ukraine” (this band had a way with titles) gets things off to a strident, marching start. Rockpile (who MAA toured with at the end of 79) appear to be an influence here, with an easy going rock n roll tinge and the kind of lightness of touch Nick Lowe specialised in – “Semi-Trailer” wouldn’t have sounded out of place on the Pile’s “Seconds Of Pleasure” and it’s not alone on the first part of the record.

Though decent enough in it’s own right this didn’t play to MAA’s strengths and apparently the band were not too happy with this record at the time either. Virgin shied away from giving it a European release and perhaps because it wasn’t quite as immediate as the début and lacked a killer single. “Come Around” has a mid-paced, Graham Parker kick to it and a lot here is quite rootsy rock, though they came back to their trademark summery organ driven sound on “Harmonic Vision” and “Blacktown To Bondi”.

“Espresso Bongo” is a fair record but didn’t quite chime in with the zeitgeist of the time and consequently got a bit lost in the rush. Listening to it today, it seems to get a head of steam as it goes along and the second half of the record if definitely the stronger – ending on a high note with the energy driven “Live Now Pay Later”.

Mental As Anything had struggled to find a foothold outside of their homeland and “Espresso Bongo” didn’t make quite the headway they might have wished even in the Aussie charts, but they re-established themselves as a commercial force there with the next collection “Cats & Dogs”. All wrapped up in a snazzy Barney Bubbles-esque sleeve, with this album they got back to what they excelled in, that is snappy and humourous pop music. This platter was on the whole a much more commercial offering than previous 2 and the Dunlop and Brown production fitted the songs perfectly. The LP climbed to number 3 in the charts.

“If You Leave Me Can I Come Too” was the big hit, but the almost 50s pop of “Walking On Rails” followed it into the top 10 and the strident but reflective “Beserk Warrior” was also fairly successful. The straightforward New Wave pop of “Sad Poetry” and “Lets Cook” hark back to the first LP and “Ready For You Now” is probably the exact point where XTC and Any Trouble meet. Elsewhere “Catalina’s Reward” is a great wobbly ballad and if “Psychedelic Peace Lamp” isn’t really psych at all, it is a great crazed glitter stomp. All of which makes this probably the most consistently pleasing but varied album of the set.

It was 1983 before the follow up “Creatures Of Leisure” emerged (in between times they had a non-album single produced by Elvis Costello “I Didn’t Mean To Be Mean”, not featured here) and at that time Mental As Anything ran the risk of sounding outmoded in the face of New Pop displacing New Wave. Leading off with a song entitled “Spirit Got Lost” says it all – the band sound a little jaded at time, the vital manic spark and personality that powered their best work is missing in the main. Serviceable pop music, but lacking any real edge to stand out from the crowd. Martin Plaza’s “Nothing Is Going Right Today” hints at their past glories and is a nice piece of slyly addictive New Wave, a bit late maybe, but good nonetheless. The version of the LP featured in this box is the European edition, which added both sides of their single, the Roy Orbison cover “Working For The Man” and “Red To Green” and dropped three other tracks, which may have tightened things up a bit, but it’s still probably the weakest of the five presented here.

This could have been the end for the Mentals, but luckily enough under the guidance of Richard Gottehrer (ex the Strangeloves and early Blondie producer) they came up with the hugely successful “Fundamental” LP, the last in this collection. It goes out on a high with this record featuring the massive international hit “Live It Up”. Here MAA successfully managed to update themselves by seasoning their core sound with electro-pop (“We’re So Strong” is a good example) side-stepping most of the contemporary production tricks of the time that makes so much music of that era sound badly dated today. “Big Wheel” hints at the sound their fellow countrymen INXS achieved to great commercial success on “Kick” a few years later. “Stones Of The Heart” and “I Just Wanna Be Happy” are a great one-two punch, perfectly encompassing all that is good about the band. Overall the record is a winner and totally deserving of success. We leave the band here they were at an all-time high.

Now a word about the presentation. This is a handsome collection, though if I had one criticism I would say the booklet could have been a bit more detailed and tell the story of the band – after all most folk may be unaware of their pre-Hogan history. No bonus tracks which is a shame, but it’s nice to get some input from Greedy Smith on each album, the discs sound good and all things considered this set is well worth your investigation. Fans of 80s Pop and New Wave would dig it. In conclusion Mental As Anything were really a good, consistent band with their own unique style, that were slightly stymied commercially by their schizophrenic approach that resulted by having three strong songwriters in the band – but ironically that is what made them stand out from the crowd in the first place and what makes their records still an interesting and enjoyable listen today.