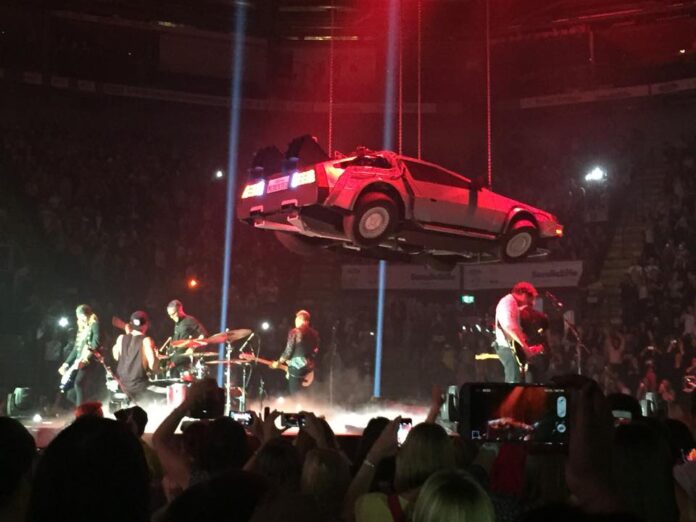 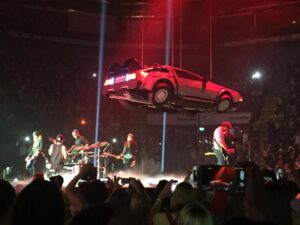 Pop punk boyband supergroup continue to publicly indulge their cultural zeitgeist fantasies as their Most Excellent tour parks its DeLorean in Nottingham. Features editor Sarah Lay is on fangirl duties for us.

As the arena in Nottingham fills up and excited chatter hums in the air trailers for classic films of the ’80’s and ’90’s play on the big screens for us. The Karate Kid waxes on and waxes off, Wayne and Garth party on, Marty goes Back to the Future while Bill S Preston, Esquire and Ted Theodore Logan are the Wyld Stallyns. If anyone in the audience was unsure what the tone would be this pre-show entertainment sets the scene for the the pop culture that will be paid homage to tonight.

The second time out on tour for this hybrid band (consisting of two out of three members of Busted and all four of McFly) following on from 2014’s debut tour and eponymous album, builds in more niche references, in-band banter and playful interpretation of tracks. This is the theatrical end of the pop concert spectrum where they aim their sights firmly on fun, rather than any ambition to be thought of as cool. This is a show which draws from film but also arcade games and pop punk to provide a high-energy, primary-coloured setting for McBusted, a band who know how to straddle dumb and fun with infectious enthusiasm.

A Bogus Journey-style fall through space to a coin-op arcade character picker that lands the band on stage for opener Air Guitar means the whole arena is out of their seats, bouncing up and down and slashing at imaginary instruments as the backdrop graphics suggest the performance style is as much influenced by nights in together on Guitar Hero as it is a study of earnest cock-rock. Whether intentional or not the juxtaposition of six guys playing and singing live as if they were pressing the buttons on a fake plastic guitar is a really clever cultural statement on the impact music-themed gaming has had on ‘real’ music, presented in a really giddy way.

The show moves on at a pace with new songs from the joint venture fitting seamlessly with tracks from the back-catalogue of the component bands. These are sing-along tracks with even the lesser-known numbers having the simple catchiness to feel like old favourites before the second verse kicks in.

The older ones lyrically reflect the exuberance, entitlement, frustration and esteem of youth newer songs hint at life in the dip between career highs. What Happened To Your Band’s chunky riffs and gang vocals gives a bouncing backdrop to the beating taken by constant reminders of a fall from grace; the panopticon built on the public ownership we perceive of our pop stars. It’s a tale told without sadness just a whisper of bitterness that is more than balanced by the atmosphere it’s delivered in.

The feast moves on with use of a second-stage mid-arena, arrived at through a descending DeLorean. Even this most Spinal Tap of stagings seems reasonable, obvious even, for band’s whose identity is so intwined with their love of Back to the Future. As they all pile out of the car and it lifts off leaving them to perform Air Hostess it’s hard to tell who is having more fun, band or audience, but there seems to be a amazement on both sides that it’s all happening.

We get the softer side too with Obviously and Beautiful Girls are the Loneliest as phone torches sway across the arena, dazzling dots of white light all around as the ability to do romantic as well as objectifying horniness is demonstrated.

Back on the main stage big hits like Crashed the Wedding and All About You buffer against the no-less-catchy but more lo-fi Riding on my Bike. This is the track from last year’s album which comes closest to James Bourne’s Future Boy identity, this is the accessible side of experimental electronica mixed again with the dumb/fun aesthetic and then played around with for visual as well as aural entertainment.

The screens show us a skit on The Mighty Ducks where McBusted are team-talked into the encore and return to the stage, clad in hockey jerseys, for the final three songs. These are songs to keep the crowd dancing – 5 Colours In Her Hair, Shine A Light and lastly Year 3000. This is one final blow-out of lunging, legs akimbo guitar slashing, of running around high-fiving the audience and each other, of pyrotechnics and streamer cannons. And then in turn each member climbs up to the back of the stage and disappears down a SuperMario pipe to massive applause and an audience wearing big grins as they shuffle out.

McBusted as a supergroup, as a concept, and as a way of six friends indulging their fantasies of being part of the pop culture they’re obsessively geeky for probably shouldn’t work and certainly not at the level of top ten albums and 20+ date tours. But it does.

Much of what McBusted do is referential rather than truly original but it would be unfair to dismiss them for this approach when so much guitar-music falls the wrong side of the influenced/apeing line. Here, the fancy of rock star posturing, video game immersion and staring in all the great films of the ’80s and ’90s is played out on stage but we can see ourselves there too. This is what McBusted do best; not the punk, gritty, ultra-real reflection of life but playing pop as a conduit to larger-than-life, goofy-grinning, can’t-believe-the-luck, shared illusion.

There will be many who scoff at the theatrics of it, and level the usual accusations of inauthenticity at the bands in all their forms but these are people that have forgotten that making fun high-energy zeitgeist-referencing pop doesn’t automatically devalue it. This is pop punk with a big budget, a catchy back catalogue, a sense of humour and a way of making a full arena all feel as if their are part of the gang. For every doe-eyed screamager there are just as many young skate kids, party hard twenty-somethings and couples. And when McBusted jump together, we all jump together, and are suspended, dumb grins plastered all over our faces.

McBusted conclude their tour with dates in:

They have festival dates during summer. More details on their website.

All words by Sarah Lay. You can find her on Twitter or fangirling boybands online and off. You can read her other pieces for Louder Than War here.