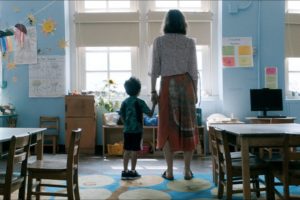 Showing at Home, Manchester and on general release now

Based on Nadav Lapid’s 2014 screenplay and Israeli movie of the same title, Lee Ashworth finds himself wide-eyed amidst the unexpected horror of Kindergarten Teacher.

Maggie Gyllenhaal is fully immersed and painfully convincing as New Yorker Lisa Spinelli, straddling domesticity with the daytime demands of teaching while trying to make time for her own artistic aspirations at poetry classes led by Gael Garcia Bernal’s Simon during the evening.  When her kindergarten pupil Jimmy Roy (Parker Sevak) begins to recite sophisticated modern poetry that he claims to be his own, Lisa becomes obsessed with nurturing his genius against the wishes of his father, pursuing her fascination with the child beyond all expectations and boundaries.

At every step this film leads you further into the unknown. The key characters are established in the early moments of the narrative and every time an obvious plot strand presents itself it is subverted with a sickly delight that is nothing short of vertiginous as we discover that the ground beneath our feet has shifted once again.

Gyllenhaal’s performance is unfailingly compelling throughout. She has become, through cinematic roles in films such as Secretary (2002) and Frank (2014), and TV roles in dramas such as The Deuce (2016-), a benchmark of quality. There’s a visceral authenticity to her performances. Directors seem to make films ‘with’ Maggie Gyllenhaal insofar as she appears to be in constant dialogue with her character, the audience and the heritage of cinema itself. Whether she’s convincing a mysteriously prodigious child to perform poetry in The Bowery or simply sitting on a stoop and looking off-camera into the light, all effects are maximised yet her performance is lacking in self-consciousness to the point that her character appears as a fully formed, independent, three-dimensional being with an internal world you want to discover. It’s impossible to believe that any of her characters no longer exist when the end credits roll.

Frame by darkening frame, the melodrama yields to a more pervasive sense of horror. Just as obsessive and increasingly desperate tendencies crowd out Lisa’s last bastions of sanity, the unfurling sense of horror colonises the telling of this curious tale like ivy invading the walls of a house before choking all remaining light and eroding the mortar.

Gyllenhaal’s Lisa is a protean combination of roles interlocked like a Gordian knot within the locus of one singular character. It is a triumph that Lisa is both mother and wife, a woman in her forties, a reception teacher and an aspiring writer yet to find the voice she does or does not have. Such roles are still, abysmally, absent from the realm of cinema. Throughout the film, her own failings as an artist remain unredeemed, informing and partly caused by her belief that she has found her voice albeit channelled through Jimmy Roy, whose dislocated, quixotic poetry comes unbidden, words shooting off from an unconscious production line.

Yet, not only is the central protagonist a mother, wife, middle-aged woman, reception teacher and aspiring writer… she is also either failing or disconnected from all those roles at some point in the film. In subverting our expectations of how women of certain age, profession and status behave, the film presents its protagonist as an anti-hero, rooting this strange tale in a radical realism.

The camera dogs Lisa in almost every frame and there are no longeurs, no excess, nothing is wasted.  Rather, everything is riven with meaning and an urgency that drives the peculiar, twisted plot forward.  The claustrophobic remit of perspective coupled with the increasingly tense social dynamics between the characters, and between Lisa and the norms and constraints of her job, all conspire to make the viewer forget the most pressing and obvious question, namely: where does Jimmy Roy get his poetry? Are these original words? It would  seem impossible. Brilliantly, we are left to wonder.

Watching this film as a forty something primary teacher and aspiring writer leant an extra layer of peril and horror to Lisa’s unfolding scenario.  As unfeasible as it would be for anyone in Lisa’s position to take the safeguarding risks that she does, it is a testament to the power of the film that my disbelief was utterly suspended throughout.

In many ways, Kindergarten Teacher is a perfect vignette.  Even for life-long learners like Lisa, there’s so much we are left not knowing.