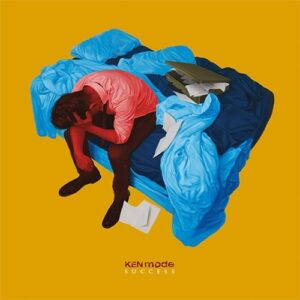 Canadian trio KEN Mode (KEN stands for Kill Everyone Now) have worked hard to earn an admirable reputation amongst hardcore folk since their formation in 1999.

In recent years, their output has won much in the way of critical acclaim, with their fourth long-player, 2011’s ‘Venerable’ winning the Juno Award for Heavy Metal/Hard Rock Album of the year. It only took another three bass players and a new label before they were ready to release album number five, 2013’s intensely well-crafted ‘Entrench’, which was also well received by fans and critics alike, and subsequently also long-listed for a number of accolades.

This brings us to their latest effort ‘Success’, the title perhaps acting as a self-referential nod to the band’s aforementioned good fortunes. Indeed, expectations for this record must be high when taking into account KEN Mode’s recent form. Add to the mix that legendary knob-twirler Steve Albini has taken on production duties for this album and we have ourselves one spicy post-punk meatball.

So, how does ‘Success’ stack up to the band’s previous efforts? Well, really bloody weirdly, if we’re to be entirely honest. You could write the words ‘MASSIVE DEPARTURE’ all over the cover of this album and it’d still feel like a huge understatement. On first listen, you get the impression that this is a band trying to deconstruct its reputation a’la Nirvana’s final effort ‘In Utero’.

Sadly, for KEN Mode, ‘Success’ is no ‘In Utero’. The album is ambitious to be sure, but it simply doesn’t gel together. While anyone who has heard the band’s previous output will already know that KEN Mode have never been a conventional hardcore band – their songs are full of discordant guitars and unorthodox rhythms – this offering takes that experimentation to extreme new levels, sometimes with positive results, but just as often it fails to deliver.

The album starts with ‘Blessed’, a sludgy, bass-led tribute to Henry Rollins that feels a million miles away from anything on ‘Entrench’ and you can only assume that this was a deliberate call made by the band. If so, it’s a bad one. The track, when listened to in context with the rest of the album, sounds like the closest thing to a filler, and why it has been front-loaded on to the album is a mystery.

Things do get a little more familiar over the course of the next couple of tracks, with ‘These Tight Jeans’ picking up the pace somewhat, and ‘The Owl’ displaying some added depth with its jazzy flourishes and Dead Kennedys-esque excitement.

The most pleasant surprise on the album is undoubtedly ‘Management Control’, which appears to be the sound of the band capturing the magic they can create when experimenting with their sound. Texturally its fascinating, and a million miles from anything fans would have heard before. Invoking both Tool and The Pixies, it proves that KEN Mode are nothing if not eclectic.

Elsewhere on the album, there are nods to the past. ‘Failing at Fun since 1981’ is straightforward uptempo hardcore, and sounds like a dead cert for getting a moshpit going when it gets played live.

By the time we reach the album’s final track, the hypnotic ‘Dead Actors’, it feels almost like we’ve been listening to a compilation album rather than an offering from the same band. This time, the band give us shades of At The Drive In with an intense exercise in light and shade. It’s a strong track and certainly allows the album to finish in a much better place than where it began.

And that’s the crux of the problem. It’s not that this is a bad album, actually there’s plenty to celebrate – the band make an extraordinary noise for a three-piece, and their appreciation for textures and layers demonstrate that we’re not dealing with any ordinary band here. Furthermore, KEN Mode should be applauded for trying to push their sound forward and take risks. It’s just in doing so, they’ve neglected to keep an eye on the quality control. This is starkly evident when this album is compared to ‘Entrench’, which delivered a much stronger set of songs with a more consistent feel to them.

It may be that KEN Mode are at a crossroads, and that this album will prove to be a footnote in the band’s evolution. If that’s the case, their next album will need to be underpinned by a much clearer vision than what’s been demonstrated here. For now, it would appear that ‘Success’ comes at a price.