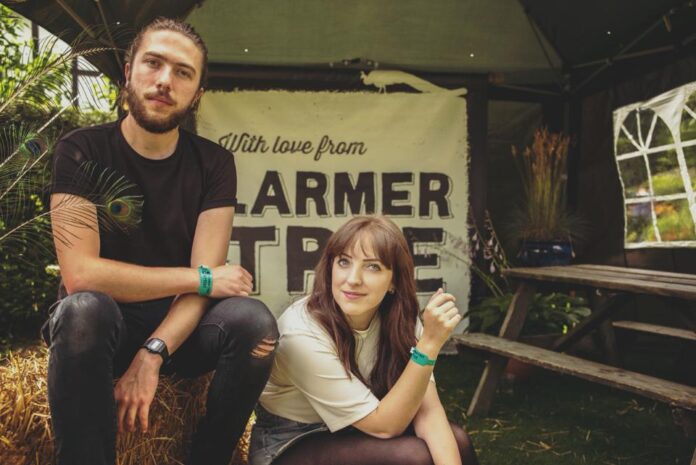 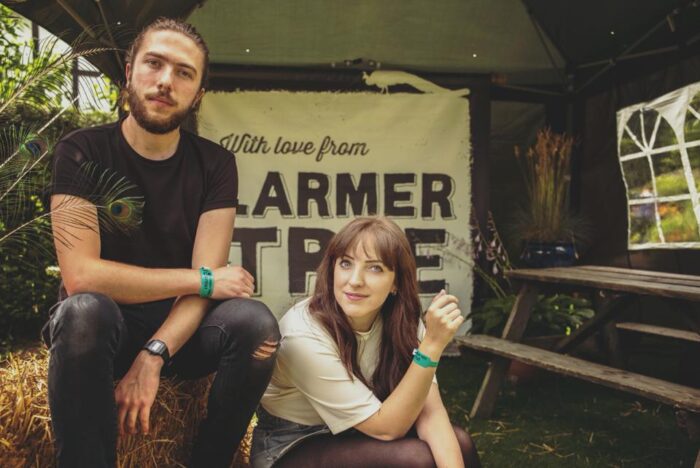 Kate McGill and Daniel Broadley are collectively known as Meadowlark.  Dan and Kate came together when they were both growing increasingly disillusioned with their music careers and wanted to shift gears and take a new direction.  Having been picked up by BBC Introducing, the Alt-synth-pop duo are now making quite a stir.  Alan Ewart caught up with them for a chat at last weeks Larmer Tree Festival.

Kate McGill was hardly an unknown when she met Dan Broadley in Bristol.  However, she was fed up with being known as “that girl who does covers of songs on YouTube.”  Kate’s songs have over 10 million hits on YouTube and her cover of Adele’s “Someone Like You” is approaching 4.5 million views on it’s own.  Dan too was looking for a change of direction after playing for some time in a rock band.  The two hit it off immediately and, together with guitarist Carl Jones, Meadowlark was born.  Carl has since moved on, but Meadowlark liked where things were going and decided to remain as a duo.

Meadowlark’s songwriting began at the folk end of the musical scale but they quickly found that their songs grew organically and took on something of a life of their own.  Dan explains that Kate’s voice is naturally fairly quiet and they wanted to ensure that the instrumentation supported the delicacy of the lyrics.  Dan said “Kate’s voice is the most important element in our sound.  Her voice is delicate and sensitive so it was important not to overwhelm that.  We felt that the electronic – piano ambient sound allowed us to achieve that.”

Meadowlark are aiming for the ambient, chillout sound that showcases Kate’s voice so well, the electric piano allows a complexity of sound that supports Kate’s voice beautifully.  As Meadowlark demonstrated when they took the stage, their stripped back soundscape begs the listeners full attention.  Their music is deep, captivating and totally absorbing.  The beauty of their approach is that it allows Meadowlark to recreate their studio sound accurately and engagingly on stage.  Kate’s voice, underpinned by the Lo-fi instrumentation, has a dreamlike quality, it draws you in and demands your full attention.

Meadowlark have received a huge amount of support from BBC Introducing since they uploaded a copy of one of their songs to the site.  Kate says ” BBC introducing is fantastic.  We have had a huge amount of support from them. They really don’t exploit you as an artist.”  Kate says that she would recommend that any unsigned artist upload a song to the site explaining that “you have nothing to lose and everything to gain.”  Kate credits BBC Introducing for helping them to land a slot at this years Glastonbury festival.

Meadowlark have a very busy summer of festivals and gigs lined up and are really excited about headline gigs they have lined up in October in London and Bristol.  They are currently busy writing material for an album that they hope to release early next year.

As an interesting aside Meadowlark appeared at this years Larmer Tree festival in the BBC Introducing slot.  Last year James Bay filled that slot.  Bay has gone on to score a No 1 album and a slot on the Pyramid stage at Glastonbury.  There is no reason to think that Meadowlark cannot emulate those achievements.

Meadowlark are most definitely one to watch.

[NB.  I had a camera malfunction so sadly no photographs]