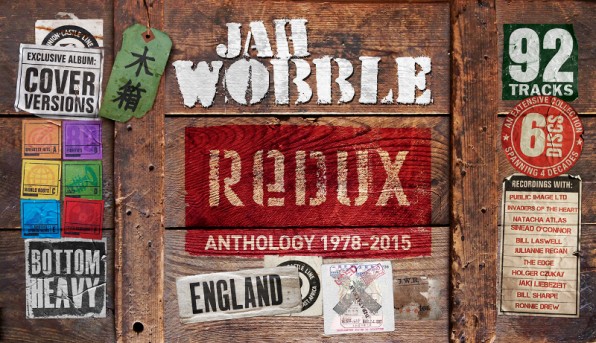 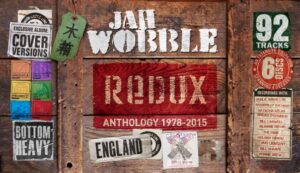 What’s your first thoughts when you think of the man born John Wardle but better known as Jah Wobble? Do you go straight to the menacing blacked-out grin of a Top of the Pops performance? Does your mind bring up the imposing but solid man-mountain playing one of the greatest bass-lines ever created on The Old Grey Whistle Test? Or are you instantly taken to the image of an elder statesman sat in a dentist chair with a bass guitar looking peaceful, even content as a merging of music from across the globe flows through his fingers?

Whatever your thoughts are, it is safe to say that over the years Wobble has been ever present (even when driving tube trains) in the world of music. His influence is writ large throughout the decades as he, with a few others (Peter Hook, Simon Gallup, Norman Joseph Watt-Roy etc) forced the bass to become more than just a background instrument, fusing styles, creating lead lines, Wobble made the bass guitar a viable, attractive instrument that demanded attention.

All of this is made crystal clear over the space of ReDux’s 6 discs spanning his earlier works with the seminal band PiL, right through to his spoken word and ambient pieces. The collection is structured in such a way that makes the whole listening experience a joy as you can either repeat listen to the Greatest Hits first disc, or you can explore his eighties work on disc 2. You can then delve into the World Roots of disc 3 and even enjoy some cover versions on the final disc (the other discs cover Jazz and the aforementioned Ambient and Spoken Word parts of Wobble’s oeuvre).

Disc 1 flows with ideals and dictates to the listener a narrative of exploration and restlessness as we start with the hymn to sobriety Visions of You which has the stunning vocals of Sinead O’Connor and Wobble’s own London inflected tones. Created as part of his Invaders Of The Heart project, the song glides and grooves stunningly on a (new)wave of abandon and acceptance, a burst of spirituality that shines through the curtains allowing a wave of warmth to inject into your conscience.

Other highlights on this disc include the heavy-wave oppressive Yin and Yang created with his old PiL bandmate (and genius guitarist) Keith Levene, the texturally rich Amor Dub, the sultry trip-hop invoking One Day (Wobble and the English Roots Band) and Becoming More Like God another example of the clean and sober Wobble rejoicing in the Universe and its magic. Don’t for one second be put off by the word God as anyone familiar with the workings of AA will be aware, God is a word used often but not in an organised religion kind of way, more a God of your own choosing whether that be your family, the Earth, or even your friends.

All of disc 1 is dripping with quality but the real magic here is THOSE PiL years and they’re covered here by the inclusion of Public Image Limited, the first thing that the band wrote together and one of the greatest opening statements in modern music as Wobble holds down that repetitive pattern, Levene glistens on guitar, and Lydon spews forth his feelings on his recent contractual issues and reacts to statements made by his former manger, Malcolm Mclaren. An outstanding opening salvo this may be but things were just about to get even better as they (PiL) went to make Metal Box, an album on which they happened to create one of the finest songs ever recorded, the “jewel in the PiL crown” as Wobble states in his autobiography, Memoirs of a Geezer (if you’ve not read this then I strongly suggest you do)  – Poptones.

Poptones is 7+ minutes of hypnotic, disturbing drama that hooks under your skin and refuses to leave, coursing through your veins, infecting you with its psycho-drama. A twisted tale of murder, Poptones is where the ideas of what was termed post-punk crystallized, creating a new breed of art that rejected the reductive tendencies of guitar rock to birth a new beast that was unafraid of exploration, of looking into the dark. Poptones remains a masterpiece however many times you hear it and one of the main reasons it still excites is THAT bass part that Wobble repeats over and over transfixing your mind.

After leaving PiL, Wobble then went on to search further afield for musical inspiration always seeking out like-minded collaborators who would happily join him on this quest. These collaborators come from all walks of life and include the masterful Jaki Liebezeit & Holger Czukay from that oh so special band CAN, who managed to create a twisted version of disco on Hold Onto Your Dreams and the funk-dance magic of How Much Are They? (a track that also features The Edge).

The eighties period of Wobble’s career covered here is a bit hit-and-miss if truth be told as you get the magic of A13, a darkly atmospheric spoken word number, and the jaunty-dub of The Beast Inside but you also get songs such as Love Mystery, Love Mystery, and Blow Out (Remix) which have not aged that well due to the production more than anything else as they are so glossy. Wobble’s bass is still effective and full of quality but it’s quite hard to break through that production making it slightly more difficult to connect with the music.

Luckily, disc 3 which focuses on World Roots is a far more interesting part of the collection as the sheer scope that it contains make it incredibly exciting. Opener, Soledad, sees Middle Eastern and Spanish influences seep in, soaking us in dust and panoramic vision. A sensational opener.

We continue on this most exciting adventure with songs such as the joyous Om Namah Shivah, L1 (a warped, breakbeat number created with The Chinese Dub Orchestra) Cherry Blossom Of My Youth (with the Nippon Dub Ensemble) and the quite frankly, ridiculously good Angels which all help you to understand the creator and his desire for new and interesting sounds and philosophies.

Now the collection switches its attention to the world of Jazz. With a well documented love of jazz and in particular the works of Miles Davies (with the Dark Magus album being a favourite) it is no surprise that Wobble would investigate the genre and try to create his very own, new forms. This influence can be heard on the scat-bop of Car Ad Music, the driving (pun intended) Rush Hour and the Round About Midnight descendent, Loquacious Loretta.

Other forms of jazz are explored throughout including the laid-back opener Slave Town Part 1 which struts into life on a bounce and a twist. Julie Campbell’s yearning and heartfelt vocal glide over the top of an irresistible array of instrumentation and also on the claustrophobic Virus B.

Disc 4 is a highlight of the collection and is worth many repeated listens.
As we reach the final stages of this collection we are thrown down into the Ambient and Spoken Word section which is another mixed bag as over the space of its seventeen tracks we are treated to some of the finest music Wobble has ever created. For example, we get the hugely spiritual and deep-meaning I Love Everybody, a song that demands you love it, mixed with Ruinlust which is not really spoken word or ambient.

The gems here worth investigating are the marching Bagpie Music, the pure ambience of Fly 8 (best track here) Sacred and Requiem II.

Here we are then, the final disc and this one is solely focused on cover versions. So out of its 9 songs, which ones are worth your time and attention? Well quite frankly, all of them are as they all display qualities that range from humorous to mischievous. From the dub reworkings of the themes To The Sweeney and The Good, The Bad, & The Ugly, through to the globally infused Theme To Get Carter, and a faithful cover of Harry J. All Stars Liquidator which is very amusing as it is played at every home game Chelsea play, something the devout Spurs fan Wobble will be very aware of. Maybe this was his way of reclaiming the song back from one of his team’s main rivals?

ReDux is a well deserved celebration of one of the world’s greatest musicians. It is an example to all that you should follow your own path, never being afraid to make mistakes or to step out of your comfort zone. Jah Wobble deserves every bit of respect and admiration that he receives and with this collection, there’s sure to be many more fans coming his way. There is plenty for everyone here so set aside a day, get rid of distractions and dive into the world of Wobble for it is such an exciting world to live in.