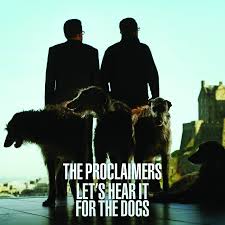 The Proclaimers: Let’s Hear It For The Dogs (Cooking Vinyl)

The tenth album from The Proclaimers carries high expectations and tackles some difficult subjects. Josh Norcliffe talks to Craig Reid about what keeps them going…

The Proclaimers’ Craig Reid: “I’ve been sorely disappointed by the lack of, not just political songs, but social commentary. There’s so much to write about in the world”

With a brand new album just released The Proclaimers haven’t neglected their political roots and the important issues that need to be addressed – ones that are often all too easy for most groups to neglect in 2015. Let’s Hear It For The Dogs, Their tenth studio album proper, could be their grittiest yet, in which they reference religion, Jimmy Savile, and the alleged 1970s Westminster paedophile ring.

“The title is a line from one of the songs. It was used a lot more in the past and if someone asked you what school you went to, they are basically asking you whether you’re a protestant or a catholic, because they can tell what religion you are”, says Craig Reid.

In the three years after the release of 2012’s Like Comedy, the Scottish duo have toured extensively, seen their songs featured as part of a feature-length film and celebrated 25 impressive years in the music biz.

“We got Dave Eringa to produce the record because we loved the work he’d done on the Roger Daltrey and Wilko Johnson thing. We are obviously not a rock act but Dave was great letting the record breathe and he liked most of what we were doing and he just let everybody kind of do their own thing”, recalls Reid.

Eringa has become widely appreciated for his work with the Manic Street Preachers and Nine Black Alps while his other notable production credits include Kylie Minogue, Idlewild and Ocean Colour Scene. Reid continues, “Dave came up for three or four days and we just made changes to the arrangements we basically had everything we played the songs live and so when we went to Wales it was a matter of creating the best performance”.

Despite it being well over 25 years since I’m Gonna Be (500 Miles) originally crashed into the charts, The Proclaimers accept that to some people they’re always going to be, “the funny-looking twins with glasses who wrote that song about walking 500 miles”. But since then they’ve proved many people wrong and the quality control of their albums have become commonplace.

“I get the odd idea but I tend to need to be back in Edinburgh. I’ve got a flat I go and work in and try to work for two or three hours. We write separately and them come together to play over the songs and make any changes we feel we have to make”.

Despite being associated with that god-awful Comic Relief charity single from 2007, the band have become seriously celebrated for their scathing lyrics and the personal tackling of political issues and social problems. Reid explains, “I think there’s probably a bit more of a grittier sound on this one and the subject matter of the songs differ. We try to write about a range of subjects”.

I then probe Reid about Then Again which refers to the Jimmy Savile child abuse saga, as well as the 1970s Westminster paedophile ring, to which he answers, “I know it’s not a subject matter most people would tackle but I did it in a way that would kind of expresses the way that a lot of people felt about it. It’s mind numbing what has happened in Britain, there are thousands of people out there who suffered.”

It leads on to quite the outburst from Reid, on why he’s been disappointed in many bands’ lyrics, something for which The Proclaimers are eloquently recognised for. “There’s so much to write about in the world and you should not confine yourself to only writing about sex or love. There are so many more subjects to write about and so many things that need to be written about”, claims Reid.

The Proclaimers have also been recently targeted when it was claimed the twins would receive a £1m pay-out when I’m Gonna Be (500 Miles) was covered during an advert at Super Bowl earlier this year.

“It was good. The kind of money they’ve written about is absolutely not what we got paid for it but that song has been in loads of adverts, films and TV programmes and it’s great because it gets your stuff out to a wider public”.

Let’s Hear It For The Dogs comes with high expectations and they’ll be on the road until at least next year. Reid says, “We’ve got this one to promote and we’re doing lots of different shows all over Britain as well as all the festivals. If we can get a crowd then we will play and then we will start thinking about writing another”.

All words by Josh Norcliffe, find his Louder Than war archive here.