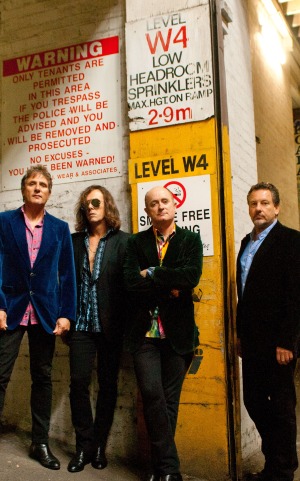 In this first piece for Louder Than War, one of our new Sydney correspondents Simon Proudman catches up with lead singer of Hoodoo Gurus.

Years back, seeing the Hoodoo Gurus at the Bristol Locarno was one of my first ever gigs. No checking of IDs ensured I could sneak into the over-18s venue on a school night and hang off the balcony listening to an aural barrage of guitar, bass and drums. I had no idea until then how loud a gig could be.

Recently, I caught up with the band after a benefit gig for the Ron Asheton charity at Sydney Uni, where they again loudly roared through six Stooge-ish songs in record time to a very enthusiastic crowd and arranged to interview their lead singer, Dave Faulkner, at a beach. Well, this is Sydney.

Louder Than War: Why do they just play occasional gigs, and only in Australia?

“It’s all economics,” says Dave, throwing a chip at an errant seagull.

“As we got older we have got less flexible, a trait of all old people I guess!” he says laughing.

“Mark (Kingsmill, drums) does not like travelling, and Australia is so far away from anywhere else. We would love to tour the US and Europe, but it is a losing proposition for us, the cost is huge, even with only three crew, and the tour manager acting as mixer, we still lose money.

“We would need a few festivals to come onboard to help make it worthwhile.”

The world’s loss has been Australia’s gain. The Hoodoo Gurus have organised and headlined two very successful coast to coast festivals, naming them Dig It Up, playing their early albums in full, and inviting along a bunch of friends including The Buzzcocks, The Sonics, The Sunnyboys, Blue Oyster Cult, and The Stems, amongst many others.

“We had a ball. It was such fun picking the bands you wanted on the bill. And most were of a similar time to us and still had it.

“How many bands going for five years, let alone thirty, are still worth seeing? Blue Oyster Cult had never even toured Australia before. We managed to sell out most of the gigs as well.”

We are now surrounded by squawking seagulls eager for more of Dave’s fish and chips.

Will there be another Dig It Up tour this year?

“No. After two successful tours we want to do something different. We are playing the Splendour in the Grass festival in Byron Bay in July, where we are going to reform the 1984 line-up with James Baker on drums to play Stoneage Romeos and the 1985-87 line-up with Clyde Bramley on Bass to play songs from Mars Needs Guitars and Blow your Cool, before the finale when all will play: that is two drum kits, two basses and two guitars!

“After that, I can exclusively reveal to Louder Than War we will playing some major city dates across Australia with the possible addition of Roddy Radalj and Kimble Rendall, our first ever line-up.”

Do you get bored playing the old songs instead of your more recent material?

“I can’t get bored as I am so busy. I am singing, playing guitar, thinking about next song, and what to say between songs, I just do not get time to be bored.

“As much as I want to play the less well traveled songs that rock my boat, and to be honest I would play just the last two albums if I could, but I really enjoy when you see the audience get energised by a song. That is really addictive.

“We cannot do a gig without playing What’s My Scene, (Like Wow) Wipeout, and 1000 Miles Away else we would be hung, drawn and quartered by the audience, although I admit some diehard fans would be quite happy not to hear them again.”

What about new recordings?

“Well, we are signed to Sony Records in Australia, but I think it is more a prestige thing for them rather than a money spinner. I am not sure they would give us the resources to fund a new album.

“I am a procrastinator, the last album (Purity of Essence) took six years. I kept saying ‘there are no songs, there are no songs’. I finally booked studio time to force me to write, to pull my finger out, and the songs kept on coming.

“We did eight songs in one day, I was almost afraid to stop, I had hit a vein of ore, and we kept on going until we were exhausted.

“There is always talk about doing something, maybe it will happen this year, watch this space.”

The seagulls have all departed now, the Fish and Chips are finished, and I wanted to delve into why the band originally broke up in 1998.

“Well, I was turning 40, and I been mostly a one trick pony doing the Gurus for most of my adult life and I just thought there must be something else. I saw the band inhibiting me from having time to do other things.

“I was proud of the last album Blue Cave and thought that was a nice way to finish, and wanted to knock it on the head while it was still going well.

“I played in a few bands, most notably Antenna, and the Persian Rugs, and then started doing demos with a new band, but it was just not gelling. I was writing more songs which really fitted the Hoodoo Gurus, it was like the Gurus were alive and kicking but not let out of the house. The Gurus needed my songs, and I needed the Gurus to play them. I said ‘fuck it, I’ll go back on my word and reform the band’.

“We did a one off gig at Sydney Homebake festival, and we plugged into that amazing dynamic, that I did not see anywhere else. From the time we stepped on stage that day nothing had changed, no rustiness, awkwardness – the chemistry was there.

“That was the first time I felt confident and bulletproof on that stage, in front of a huge audience. All the young bands were trying to blow us off the headline spot, I did not give a flying fuck, I knew no one could beat us this day.”

You have not toured the UK for many years, have you any strong memories of playing there?

“Well, as I said before, I would love to play there again if a promoter would cover the costs. I remember touring in Britain as being great, although the binge culture was taking over, with fighting, drugs and booze happening after our gigs in the streets.

“I think Brixton Academy was the best gig we ever played as a headliner. We also supported U2. Bono was a fan and would watch from the side of the stage, although never talk to us.

“They would always do a ridiculously long soundcheck with the bloody Edge tinkering around with his stupid echoes for up to an hour, so we never got much of a soundcheck.

“I wasn’t a fan of them, I probably would have liked them if we got to talk to them. That’s the thing with bands, the ones you don’t like are the nicest ones to meet.”

Interview by Simon Proudman. This is Simon’s first piece for Louder Than War.