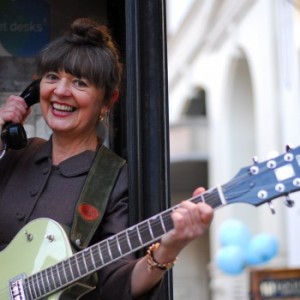 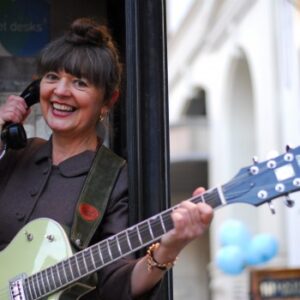 With her new album, Anarchy Skiffle recently released, the former lead-singer with The Horns and The Chefs, Helen McCookerybook, took time to chat to Louder Than War’s Paul Scott-Bates and let him have a list of her (current) Top 10 albums. Here’s the second five, continued from here.

This compilation has fantastic songs, fantastic voices and fantastic reverbs. I played a song from this to a song-writing group and discovered that I had Alton Ellis’s daughter sitting there in front of me. She also had a gorgeous voice.

Martin Stephenson introduced me to Etta Baker, a Piedmont Blues artist with a distinctive style that sounds like sunshine on a porch. I visualize her sitting there in her chair, using a kitchen knife as a slide, as the sun goes down. She is inspirational.

Northern Soul is mad and dynamic and almost out of control – some of the best dance music ever. I like the rawness of these tracks. Some of the singers sound as though they are going to burst.

A Grand Don’t Come For Free by The Streets

It’s easy to forget about The Streets but I did really like this when it came out. It is very clever in a good way. You don’t realize the amount of care that’s gone into it and it’s really English folk music brought right up to date- urban folk, I suppose you could call it. Blows Mumford and Sons right out of the water in the authenticity stakes.

I love French pop. There is a wealth of stuff to listen to from the 1960s onwards and Vanessa Paradis fits right into the story. There are some amazing artists in France; the hip hop artist Wax Tailor makes swing electronica and barminess is de rigeur (pardon the pun). Check this out too if you don’t believe me.

You can listen to tracks from Anarchy Skiffle here.