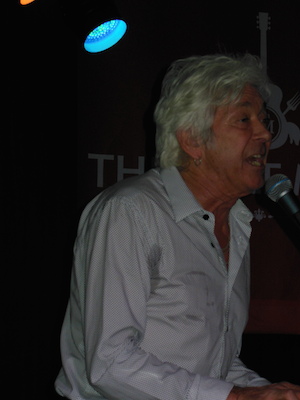 Keyboard legend, Ian McLagan, of Small Fames fame, graces fans with an intimate performance at Putney’s Half Moon. LTW’s Craig Chaligne was there to review.

Currently promoting his new album United States, Ian Mclagan the legendary keyboard player of The Small Faces and The Faces stopped at The Half Moon in Putney to play a three night residency. Mac has been living in Austin, Texas for the past twenty years where he has put together a new version of his Bump band and recorded 5 albums in his own house. He rarely comes to Europe (his last UK tour was in 2011) so this was a rare chance to catch him live in one of London’s most iconic music venues. The show featured just Mac and his bass player John Notarthomas After a short introduction from John, Mac came on stage and launched straight into Hello Old Friend, a song he wrote for his former band mate and friend Ronnie Lane.

Songs from United States formed the bulk of the set but Mac didn’t forget his past with excellent versions of Get Yourself Together and Cindy Incidentally. The songs were interspersed with anecdotes and stories about his his Irish family and how he came to join the Small Faces which enabled him to say a few “nice” words about their former manager Don Arden. Another funny remembrance was when he recalled landing in an O’Neill’s pub after a rehearsal for a tour with Billy Bragg in search of some company (which propelled several members of the audience to buy him pints of Guinness despite him saying that he would only have drink after the gig) I thought that the bass and keyboard combination would be a bit strange but John and Mac have been playing together for so long that they managed to pull it off with ease.

Towards the end of the gig he apologised for promising to bring the band for his next UK tour during his last visit to The Half Moon and failing to do so. He then urged us to come and visit Austin and see them at The Lucky Lounge where they play each Thursday from 6pm to 8pm. After two hours of dyed in the wool rock’n’roll on the rather warm stage of The Half Moon, the show ended with a lovely version of one Ronnie Lane’s greatest songs “Debris”. Ian then spent the next hour chatting with fans and signing copies of his fantastic autobiography “All the Rage”. If you can’t afford the plane ticket to see the Bump Band, I highly recommend The Live At The Lucky Lounge CD that features highlights from two gigs recorded in April last year. You can still catch Ian and John in the UK in July.

You can see more from Ian by visiting his personal website here, where you’ll find all UK tour dates.

All words by Craig Chaligne, you can read more of his work by visiting his LTW author’s archive here.